You are here: Home » Tonight the fate of our marriage, albeit decided, hangs in my psychological balance….

Tonight the fate of our marriage, albeit decided, hangs in my psychological balance…. 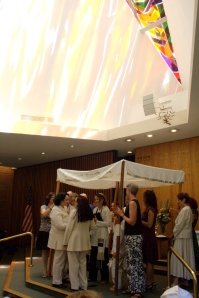 “R.I.P MARRIAGE” – THE DEATH OF MY MARRIAGE BY THE VOICE OF CALIFORNIA, ENDORSED BY THE BENCH?  OR

Marriage Equality   Join us on the Steps of the Court 400 McAllister, San Francisco.

The fate of gay marriages has been decided and the decision of the Justices is handed down tomorrow. Nobody has a clue about the outcome.  I spoke with a few of the leaders in the LGBT community and I did not get an overall positive feeling.  However we are all already working on the alternatives.  We will go back and go back and go back, over and over again, until our right to marry is secured and until we get full equality under the Federal law too.

Tomorrow will wither be a day of joy and mourning;  remember there are to sides of this issue and we do not which side will be doing what.    There will be protests and celbrations all round.  Tomorrow already feels like “Rodney King ala LA” day as the tension builds.   I believe that if prop 8 is overturned there will be a dangerous lashing out by the rightwing / hate mongers/ domestic terrorists.   If not over turned the Gay community will mobilize like it has never done before and the grass roots winover will start with a vengeance.

We must remain peaceful- we muct write our stories- we must infiltarte right wing blogs, en masse, and eloquently and poltiely explain who we truly are.   Oh dear …. not sure how I will sleep tonight. It is so injust for us maried people to not know what our ;ocus standi will be in the morning….