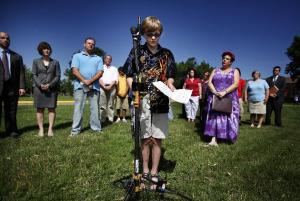 NCLR, SPLC, and Faegre & Benson filed the suit on behalf of five students who have faced severe anti-LGBT bullying and harassment while attending school in the district. It charges that the district’s gag policy perpetuated the harassment suffered by these students and others. The suit was filed in the U.S. District Court for the District of Minnesota after the school district failed to address the persistent abuse or repeal its discriminatory policy.

“There is something seriously wrong in the Anoka-Hennepin School District, and district officials know it,” said NCLR Executive Director Kate Kendell, Esq. “In school after school, kids who are perceived as gay are harassed mercilessly until they drop out, melt down, or lash back. This epidemic of harassment—unlike anything we’ve seen in neighboring districts—is plainly fueled by the district’s shameful and illegal policy singling out LGBT people and LGBT people alone for total exclusion from acknowledgement within the classroom.”

On a Conference call today with Bloggers and Press, NCLR and SPLC representatives asserted that what has been touted by the school district spin machine as a ‘neutral policy,’ is indeed a ‘Gag Policy.’

The curriculum is silent on LGBT matters and also specifically prevents teachers from discussing issues when they come up, placing an absolute taboo on the subject matter, thereby  relegating it to a category of shame.  This logically serves to exacerbate the bullying though a tacit validation of the perpetrators.

The school district’s gag policy, misrepresented by its official designation as the “Sexual Orientation Curriculum Policy,” prohibits staff from offering support to LGBT students or acknowledging the existence of LGBT people. It has played a significant role in encouraging the hostile anti-LGBT climate in the district, by imposing a stigma on LGBT students as pariahs, not fit to be mentioned within the school community—a message that comes across loud and clear both to LGBT students and their harassers. It has also limited the effective responses that teachers can provide when they see anti-LGBT harassment taking place.

Failing to provide critical curriculum where professional educators and school boards know that young teens may be coming to terms with their sexual orientation, is reckless in itself; and then when fuelled by slurs such as “faggot, “lesbo,” “dyke” and “why don’t you go kill yourself, ”  in a milieu of zero counteractive education, is tantamount to placing a gun in the hand of the suicidal teen.

The lawsuit charges that LGBT students and students perceived as LGBT were subjected to anti-LGBT slurs on a daily basis and were physically threatened or attacked by peers. While many of these abuses occurred in front of teachers or were reported to school officials, school personnel almost always took insufficient action to stop the abuse.

“We are disappointed that the district fails to see the serious harm this policy is causing its students,” said Sam Wolfe, lead attorney on the case for the SPLC. “School and district officials who are entrusted with the safety and education of all students continue to ignore, minimize, dismiss, and even blame victims for the abusive behavior of other students.”

“The Anoka-Hennepin School District, where we stand today, has refused to take a stand against harassment and bullying,” said Mary Bauer of the Alabama-based SPLC. “This policy sends a message to kids that who they are is not OK. Our plaintiffs have stood up and said ‘no more.'”

The lawsuit comes a day after Anoka-Hennepin School District officials denied any responsibility for the severe and pervasive harassment suffered by LGBT students. It was also reported on Wednesday that the district is at the center of an investigation by the U.S. Department of Justice and the Office of Civil Rights because of reports of anti-gay bullying.

The lawsuit describes numerous incidents of harassment, including the following:

Jeff Frei, the father of one of the students who was persistently bullied, said, “Our son has a right to go to school every day feeling safe and accepted. This is a basic right that every child has. His older sister shouldn’t have to spend an hour waiting outside his school so she can walk him home to make sure he gets there safely. We cannot go through another school year of this and we cannot lose any more of our young people to this. Enough is enough.”

Mary Olson, spokesperson for the school district said they stand by their policy and have strict bullying and harassment laws which addresses sexual orientation. “We have tried to make it really clear that our staff is to intervene when they see bullying,” Olson said.  She went onto to tel KARE ” as of Thursday the district had not received a copy of the lawsuit but said it wants to work with the Southern Poverty Law Center and Center for National Center for Lesbian Rights, two national groups leading the lawsuit.

Representatives for the Plaintiff’s said that prior to filing the lawsuit they had tried numerous times to engage the District to find a solution for the problem, but received little cooperation.

Other  parents believe that the farcical ‘policy’ and play on words is a disingenuous attempt by the District to redirect attention from the reality and truth.  One parent commented on an earlier article “I hope they are forced to admit the truth, and that is …that a small group of religious zealots are dictating policy and the school board appears beholden to them and NOT the students who they ought to  educate and protect.”

The parent further  comments, “They would have the public believe they have no problem with classroom discussion on the subject asking only that it be kept to district approved curriculum on the subject, which sounds good in theory yet when I asked the very simple question of “Where can I find “district approved curriculum” that speaks to or on homosexuality?” I was told “there is none”, so in other words teachers would have no reason (or be authorized) to speak on the subject at all.”

It is clear that despite concern from NCLR and other groups, these “play on words” have gone on for a long time, costing children their lives.

This same parent asserts “They argue that a teacher can and should step in and intervene in a bullying situation and that the neutrality policy has no affect on the bullying, yet what they don’t tell the public, press or lawyers is any kid who is targeted because he/her is LGBTQ is to be referred to the school social worker for assessment….like they are sick or something? It implies there is something wrong with these kids, who are not the perpetrators but rather victims of the hostility and it validates the bullies “fear of them” but two…it tells these LGBTQ kids they are less than everyone else and unworthy of equal protection, recognition and respect and that is unacceptable from a moral and legal standpoint.”

The mother continued, “As a parent and taxpayer in this school district I am embarrassed and ashamed at the position and inaction of this school board, and for many like me it’s a lose-lose situation, we lose knowing that this is going on and is a stain on our whole community painting us all as ignorant and bigoted but we lose again when (not if) they lose and our property taxes get jacked up to cover the settlements and possible loss of federal funding because this school board cannot or will not stand up to the true bullies.”

The lawsuit asserts that the district’s gag policy and its failure to protect these students from harassment violated these students’ rights under the United States Constitution, Title IX, and the Minnesota Human Rights Act. Finally the truth may in fact yield better policy and while parents may feel that they lose whichever way this turns out, the hope is that the children will come out better for it through recognition and implementation of their basic rights as young students in the school district.

The SPLC, NCLR, and Faegre & Benson began investigating the district’s policies in 2010 after several LGBT students from the district died by suicide.

Attorneys working on the case include Christine Sun and Sam Wolfe of the Southern Poverty Law Center; Christopher Stoll and Ilona Turner of the National Center for Lesbian Rights; and Michael A. Ponto, Marty Chester, Christopher Dolan, and Zack Stephenson of Faegre & Benson, LLP.

The following policy was adopted by the Anoka-Hennepin district in February 2009:

It is the primary mission of the Anoka-Hennepin School District to effectively educate each of our students for success. District policies shall comply with state and federal law as well as reflect community standards. As set forth in the Equal Education Opportunity Policy, it is the School District’s policy to provide equal educational opportunity and to prohibit harassment of all students. The Board is committed to providing a safe and respectful learning environment and to provide an education that respects the beliefs of all students and families.

The School District employs a diverse and talented staff committed to serving students and families from diverse backgrounds. The School District acknowledges that one aspect of that diversity regards sexual orientation. Teaching about sexual orientation is not a part of the District-adopted curriculum; rather, such matters are best addressed within individual family homes, churches, or community organizations. Anoka-Hennepin staff, in the course of their professional duties, shall remain neutral on matters regarding sexual orientation including but not limited to student-led discussions. If and when staff address sexual orientation, it is important that staff do so in a respectful manner that is age-appropriate, factual, and pertinent to the relevant curriculum. Staff are encouraged to take into consideration individual student needs and refer students to the appropriate social worker or licensed school counselor.