You are here: Home » Ugandan Government Spies on GAYS and Steals Documents in Ongoing Persecution 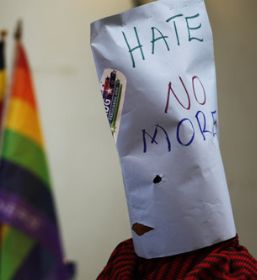 Ugandan LGBTI activists awoke this morning to a shock when they found that the Ugandan Government had infiltrated their meetings and obtained Minutes outlining their strategies and naming people and organizations in the movement.

The Ugandan Newspaper, The Observer reports that:-

The government says it has intercepted minutes of a recent meeting that discussed wide-ranging strategies on how to promote the rights of lesbian, gay, bisexual and transgender (LGBT) people in Uganda.

These strategies include how to raise funds and recruit ‘friendly’ journalists into the cause of fighting for homosexual rights in Uganda. Some sources have told The Observer that security operatives infiltrated gay groups and managed to get a document containing minutes of the meeting.

The unsigned document, a copy of which we have seen, names 41 people, from 23 NGOs, as having attended the meeting on May 4, 2012, under the coordination of the Civil Society Coalition on Human Rights and Constitutional Law (CSCHRCL).

The document has reportedly given Rev Simon Lokodo, the minister in charge of Ethics and Integrity, ammunition to go after gay activists with renewed zeal. He has already illegally closed down two meetings accusing the LGBTI activists of illegal promotion of homosexuality. However there is no law yet in Ugandan that outlaws so called “promotion of homnosexuality.”

Shortly before leaving for an official trip abroad last week, an excited Lokodo, upon seeing the document, said he had finally obtained the information he needed to fight homosexuality in Uganda.

“These people are disruptive; they are promoting a negative culture contrary to the laws of this country. They are promoting homosexuality and lesbianism as an acceptable culture, and this is ruining our lives,” Lokodo said.

He added: “This is not going to stop. We will support the bill. There is now sufficient evidence to move against these evil people. We’ll punish them with a deterrent punishment. We are looking for a day when this law is going to take shape.”

Last Wednesday, Lokodo announced that the government would ban 38 NGOs deemed sympathetic to activities of LGBT people in the country. He said he had passed the list of the NGOs to the Internal Affairs minister to get all of them deregistered, as they were engaging in an illegal activity. Lokodo told journalists that the NGOs were receiving support from abroad and “recruiting” young children into the vice.

The new anti-Homosexuality Bill seeks to outlaw the promotion of homosexuality: The Article went on to state:

Article 31 (2a) of the constitution, as well as provisions of the Ugandan Penal Code Act, prohibit same sex relationships. Two years ago, Ndorwa West MP, David Bahati, moved a private member’s bill, the Anti-Homosexuality Bill 2009, seeking to impose tougher punishment for promotion of, and involvement in, homosexuality.

Although the bill enjoys ample support across Uganda, western governments have piled pressure on Kampala to stop the legislation on human rights grounds.  Last week, Bahati, while commenting on the latest campaign against gay activists, said his bill intended “to stop the promotion, recruitment, funding and same sex marriages”.

He insists that Uganda must stand firm and reject attempts by people who want to promote activities of LGBT people, adding that homosexuality is not a human rights issue in Uganda because it is illegal.

When told about the meeting minutes that Lokodo’s people had found, Bahati said: “If it is true that such a document has been [obtained], it serves to strengthen what we have been talking about; that these people are deliberately recruiting followers and promoting their actions, taking advantage of a weak law. We now need to move and strengthen the legal regime and make the punishment more stringent.”

However, organisers of the now controversial meeting are defiant. Jeff Ogwaro, the national coordinator of CSCHRCL, told The Observer yesterday that the NGOs had been meeting monthly for about six months. He, however, denied any wrongdoing.

“I am surprised that government does not know its own laws,” Ogwaro said. “We are promoting human rights, just like those promoting children’s rights… but we don’t have a curriculum that teaches people how to have [gay] sex. Lokodo needs to be educated. He is ignorant.” Read More –

Judging from this Article it would seem that the Ugandan Government is stepping up its persecution of the LGBTI community in Uganda, with very little regard for the current laws. This move on the part of the Government could  result in a stepped up promotion for the passage of The Anti-Homosexuality Bill as activists seek redress in the Courts against the illegal actions of Minister Lokodo. The Ugandan Courts have been known for their independence and the Government in fear of a ruling against Lokodo may seek quick passage of the AHB.

In doing so, the West will be faced with decisions to isolate Ugandan interests from the International community and possible cuts to AID.