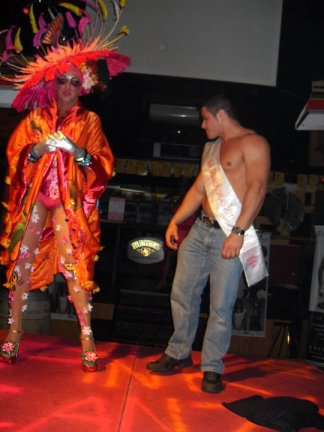 Coenie Kukkuk is a man who wears many hats. He is a founder and director of the South African for profit all male beauty pageant, Mr. GAY SOUTH AFRICA (PTY) LTD; he is the director of the lucrative annual Pink Loerie festival in Knysna, and also a practicing attorney in Pretoria, South Africa, who writes an opinion column for a South African Blog, Queerlife, titled “Coenie Kukkuk’s African Fairytales” where he described himself as “Lawyer, activist and a member of South Af(r)ica’s gay social elite….” But in truth what we have is a wardrobe of interchangeable hats that have served to silence a portion of  the gay community.

We all know that pageants are held around the world where title holders take on the task of supporting charities and causes.

This is indeed a noble quest and I would venture to say that the organization of Mr. GAY South Africa, may seem to have set out to do the same. However, it went beyond. Given the context of  South Africa, which is unlike any other country in the world, the pageant Mr. Gay South Africa, has attached itself to a significant measure of white male elitism, with a token black or two, and has been unable to lift itself  beyond mere invitations to inclusiveness.

Now for the most part this may not seem to be that important in the big scheme of things, but it is and its importance lies in the fact that the Mr. GAY SA pageant has declared its winners to be the Ambassadors for LGBTI rights in South Africa. If a muscle, brawn and beauty were to truly earn such title then it should not be set up as exclusionary.  But the political and economic landscape has made it impossible for all to participate, not to mention the sexism, and hence the mission statement of the pageant is a misrepresentation.

When I wrote my articles criticizing the contest and further articles calling for the current Mr. GAY SA to renounce his claims to ambassadorship, people commented on social media and Coenie Kukkuk did not like what he read. This resulted in him going all out to solicit what we call “trolls” to bad mouth every comment on every article I wrote on the subject. Mr. Kukkuk would himself appear on my site and other sites, using pseudonyms, tracked back to him, with comments that were quite derogatory.  But hey who am I to complain when I write, I do believe I am fair game.

What I do not do is send letters threatening lawsuits. Instead I ignore or clarify – that is it!

Since I started speaking out against the way Mr. GAY SA describes itself and its process of judging the next so called “LGBTI Ambassador.”  I have received scores of letters of support from the South African gay and LGBTI community. However there has been a awful and revealing common denominator in these letters.  The community is terrified to speak out, afraid of being sued by Coenie Kukkuk, the lawyer who profits from his directorship in Mr GAY SA. PTY LTD and who seems to have a habit of sending out threatening letters.

Many have asserted their upset and dissatisfaction with the pageant.  Some have said they would like to enter, but cannot afford to do so, because it is set up in a way that only those with substantial (South African context) money can afford to do. Others have explained how they become “unpaid volunteers” to the “for-profit” enterprise, where they give up valuable work time to do the bidding of the contest.  The prizes are few and not lucrative,  and much of being a contestant is self funded.  This means that the average black man in a Township far from Johannesburg has no chance of entering and some of the white men , who have entered, have left the pageant feeling depleted. Others have expressed upset and being silenced by Kukkuk when complaining about a myriad of issues, perhaps the subject of another post.

It is clear that as a means of silencing people, Kukkuk’s protocol is to send “gag” letters. These take the form of  intimidating ‘cease and desist’ letters threatening court action and even worse, threatening criminal arrest and  prosecution, if the person complains or publicly criticizes the pageant.

I have decided to publish an example of such letter here, below. This  letter was written, signed and faxed by Coenraad Kukkuk on his law firm letterhead to a gay identified man by the name of Rudi Holtzhausen. It was sent to Mr. Holtzhausen’s place of work with a cover sheet saying “personal.” However its mode of delivery rendered it impersonal and apparently Mr. Holtzhausen’s superiors were able to read it. It was passed on to Mr. Holtzhausen via electronic transfer from his work place.

The purpose of bringing this into the open is to expose Kukkuk and hs methods for all to see,  in the hope that Mr. GAY SA (PTY) LTD. cease and desist from trying to shut people up who have complaints about the organization. Given the public nature of this ambassadorship all critique ought to be public and for all to see. Another reason is to expose the hypocrisy of someone who is wearing too many hats.

From the letter one can note:-

1. Mr Kukkuk is in effect representing himself, calling his own enterprise, albeit a legal persona, where he is a director ” my client.”  This serves to enhance the intimidating impact of the letter;
2. Kukkuk fails to tell Holtzhausen what the actual comments/ remarks were ; he asserts are defamatory and damaging remarks – but does not provide the specific offending comments in his letter – hence the vagueness of the letter renders it to wide and ineffective, making it clear that it was intended as an intimidating threat only to silence the man in general;
3. Kukkuk fails to specifically assert what damages he has suffered;
4. Kukkuk  is calling himself the “Plaintiff”and Mr. Holtzhausen, the “Defendant,” as a means of intimidation – because he has yet to file a court action, so there is in fact NO Plaintiff nor a Defendant – not until there is a case in court;
5. Days have gone by and so the twenty four hour response threat  was indeed an idle threat and attempt to silence voice this on Facebook;
6. Kukkuk has a very weak case if indeed he brings an action – it will be very difficult to provide evidence of actual damages suffered by the so called comments –  and if  he did lose R250,000 because of any comment that may have been made by Mr. Holtzhausen, he will have to show his books and the very profitable business in Mr. GAY SOUTH AFRICA. He attributes enormous power to Mr. Holtzhausen. Also if something was said that is slander then it must be proved to be false. Good luck Kukkuk!
7. To add insult to injury Kukkuk sent this letter to the work of Mr. Holtzhausen, via fax for all to see, alluding to him using Facebook during work hours, with the clear intent of causing embarrassment and harm to Mr. Holtzhausen .  This indicates the retributive nature of the communication.  What happened to regular mail? Holtzhausen  may well have a strong claim or counterclaim against Mr. Kukkuk for this indiscretion;
8. If it can be ascertained that this is a frivolous threat Mr. Kukkuk should be reported to the Law Society.

We refer to the above and wish to confirm that we act g=herein on behalf of MR. GAY SOUTH AFRICA (PTY) LTD.

It is our instructions that you have and still are actively causing damage to our clients in that you post defamatory and/or libellous remarks and posts on the internet social network Facebook.com and/or on other internet portals, during and/or after office hours, despite being warned not to do so.

Our clients have instructed to convey that unless you:

Our Clients will proceed to

costs, estimated at no les sthan R20 000.00 but not limited thereto, of whatever action or application instituted, you will be liable for.

Please give this matter your urgent attention as it could have sever consequences.

We wait to hear from you in writing within 24 hours.

So here is my own message to Coenie Kukkuk:  – your game is up. Too many people have reported receiving similar letters. I have no doubt I will receive more after this and who knows perhaps even my own cease and desist. Most often when someone criticizes you and your organization, with valid remarks, you send out these letters, instead of validating and addressing the actual concerns. Do you have something to hide?

In basic parlance, Mr. Kukkuk, this is not apartheid days anymore, even though you admit in your blog you are of the social elite. This is no longer a place where people are told by the boss or the “white man in power” to shut up or go to jail!  You have no right to silence your critics. Freedom of speech and expression of opinion is not slander. For as long as you think your pageant winner is an Ambassador for the community – you are an open book. Time to stop the bullying and face the reality and the critics of your enterprise.

Perhaps  a courageous Mr. Hotlzhausen is the one who may stand up to you, your bullying and your threats.  I would certainly encourage him to find a lawyer to see if he should sue you for the harm you may have caused him by sending this sordid letter to his employers,  which by doing so, you in effect made public. I would hope that the unethical standards displayed by you in this endeavor are picked up by the South African Law Society and you receive the discipline you deserve. 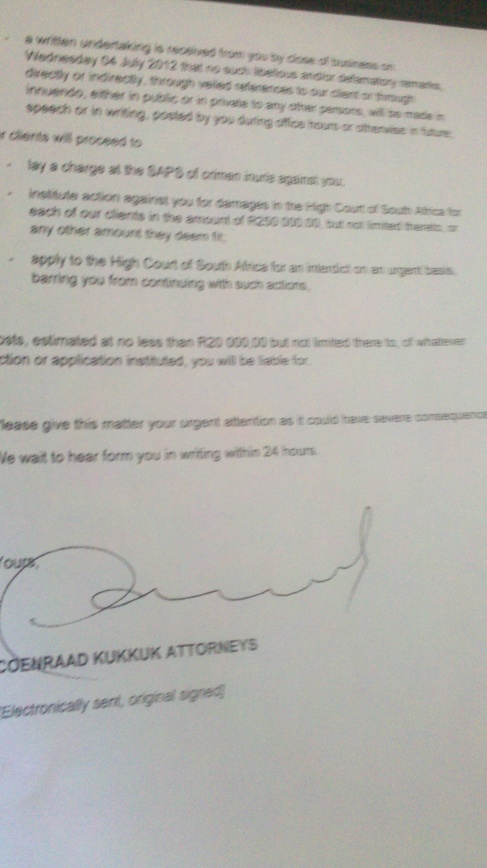 UPDATES: Since posting this Article I have received numerous e-mails, mostly confidential from other members of South Africa’s GAY community as well as contestants and sponsors with stories elucidating their perspectives of the Mr GAY South Africa operation. Some of those stories include reference to  similar letters such as the one above – including the fact that another such letter was sent by the office of  Mr. Coenraad Kukkuk to an employer. In that event, the person who received the letter alleges he suffered being “outed” at work and hardship as a result of the communication.