You are here: Home » Celebrating Bayard Rustin with Author of “I Must Resist” Michael Long

Celebrating Bayard Rustin with Author of “I Must Resist” Michael Long 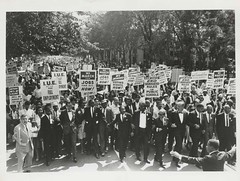 The Bayard Rustin LGBT Coalition, Alice B. Toklas Democratic Club, City Lights Booksellers, and Atlas Leadership Strategies will all be  co-sponsoring an evening with Michael Long, author of “I Must Resist: Bayard Rustin’s Life in Letters” at the Commonwealth Club San Francisco on August 21.This special gathering marks the 100th Anniversary of Bayard Rustin’s Birthday, and mark the 49th Anniversary of the March on Washington for Jobs and Freedom (August 28).

The event will feature author Michael Long and will be moderated by Andrea Shorter. Start time 5.30 pm.

I plan to attend this event on Tuesday evening, where I will be handing out gifts to attendees; silver plated Nelson Mandela coins “A Long walk to Freedom”, courtesy the South African Gold Coin exchange.  The tokens are intended to promote the legacy of Nelson Mandela; one of truth, reconciliation, forgiveness and all-inclusiveness.  This marks the month of launch of the first ever box-set Nelson Mandela AIDS 2012 collectible medallion set. READ MORE ABOUT HE MEDALLIONS http://oblogdeeoblogda.me/2012/08/03/celebrating-the-launch-of-nelson-mandela-hivaids-medallions-in-the-united-states/

SAGCE is well on its way to distribute 1,000,000 such medallions promoting the legacy of Nelson Mandela.

Michael Long ‘s  “I Must resist” :- Bayard Rustin’s eloquent, impassioned voice, his ability to chart the path “from protest to politics,” is both timely and deeply informative. As the Occupy movement ushers America into a pivotal election year, and as politicians and citizens re-assess their goals and strategies, these letters provide direct access to the strategic thinking and tactical planning that led to the successes of one of America’s most transformative and historic social movements.:-

Published on the centennial of his birth, and in anticipation of the 50th anniversary of the historic March on Washington, here is Bayard Rustin’s life story told in his own words.

Bayard Rustin has been called the “lost prophet” of the civil rights movement. A master strategist and tireless activist, he is best remembered as the organizer of the 1963 March on Washington, one of the largest nonviolent protests ever held in the U.S. He brought Gandhi’s protest techniques to the American civil rights movement and played a deeply influential role in the life of Martin Luther King, Jr., helping to mold him into an international symbol of nonviolence.

Despite these achievements, Rustin often remained in the background. He was silenced, threatened, arrested, beaten, imprisoned and fired from important leadership positions, largely because he was an openly gay man in a fiercely homophobic era.

Here we have Rustin in his own words in a collection of over 150 of his letters; his correspondents include the major progressives of his day — for example, Eleanor Holmes Norton, A. Philip Randolph, Roy Wilkins, Ella Baker, and of course, Martin Luther King, Jr.

He was a leading activist of the early 1947–1955 civil-rights movement, helping to initiate a 1947 Freedom Ride to challenge with civil disobedience racial segregation on interstate busing. He recognized Martin Luther King, Jr.‘s leadership, and helped to organize the Southern Christian Leadership Conference to strengthen King’s leadership; Rustin promoted the philosophy of nonviolence and the practices of nonviolent resistance, which he had observed while working with Gandhi’s movement in India. Rustin became a leading strategist of the civil rights movement from 1955–1968. He was the chief organizer of the 1963 March on Washington for Jobs and Freedom, which was headed by A. Philip Randolph, the leading African-American labor-union president and socialist.

Homosexuality was criminalized in parts of the United States until 2003 and stigmatized through the 1990s. Rustin, a gay man, had been arrested for a homosexual act in 1953. Rustin’s sexuality through his   public criminal charge was seen as an embarrassment by other leaders.

Rustin was attacked as a “pervert” or “immoral influence” by political opponents from segregationists to Black power militants, and from the 1950s through the 1970s. In addition, his pre-1941 Communist Party affiliation was controversial. To avoid such attacks, Rustin served only rarely as a public spokesperson. He usually acted as an influential adviser to civil-rights leaders. In the 1970s, he became a public advocate on behalf of gay and lesbian causes.

This promises to be a very special evening; looking forward to seeing you there.
Commonwealth Club LGBT Forum Events:

3 great programs at the Commonwealth Club next week being put on by the LGBT Member Led Forum: