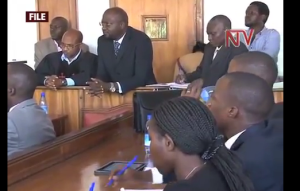 Pastors Michael Kyazze and Robert Kayiira today began their community service sentence as guidance counselors, administering voluntary counseling and testing to the Youth on issues including HIV and AIDS. However while we applaud the guilty findings, the sentences are a joke.

The punishment was handed down to three Pastors, including  Pastor Martin Ssempa for conspiring to defame Pastor Robert Kayanja, who they had falsely accused of Sodomy.

Sodomy is a crime in Uganda and the harm they caused through their false accusations was immeasurable. Yet the punishment is not only light, but also ironic.  One would think that given the nature of their crimes and the extreme irresponsibility the three would have received some prison time.

Instead they get to do what they enjoy doing. Administering advice. the great joke is that their irresponsibility has in essence been rewarded by the very notion that they are even qualified to give counseling of any kind, least of all to youth and people with HIV/AIDS.

As can be seen the so called punishment is expressed as being within their comfort zones and that they are appreciating that they can work the 100 hours in a place where their so called expertise can be utilized. Surely these men should be expelled from their respective churches and certainly they should not be allowed anywhere near Uganda’s needy and youth.

Uganda’s judiciary has often displayed its independence and metered out just punishment. In this case , however, it is laughable.

At least we get to call the three gay haters, criminals!