You are here: Home » UK Breaks Pledge to not Deport Gay and Lesbian Asylum Seekers

The deportations of lesbian, gay, bisexual and transgender (LGBT) asylum seekers have not ceased are continuing, despite government pledges to ensure their refuge in the United Kingdom.  According to a Press Statement by Peter Tatchell, Director of the London-based human rights organization, the Peter Tatchell Foundation.

Traumatized refugees who have fled homophobic persecution and violence should not be subjected to further intimidation at the hands of the government where they seek safety and this, all too often, is what occurs by virtue of the treatment the asylum seekers are subjected to.

In too many of these deportation cases asylum seekers are LGBT people who are threatened with or removed to countries where they are at risk for persecution through discrimination, harassment, assault, arrest, imprisonment, torture and murder.

“These deportations violate David Cameron’s and Nick Clegg’s commitment to a fairer deal for LGBT refugees fleeing homophobic and transphobic persecution,” asserted Tatchell.   The coalition government pledged: “We will stop the deportation of asylum seekers who have had to leave particular countries because their sexual orientation.” In 2010, David Cameron personally promised: “Those Africans seeking asylum on the basis of sexual orientation and at real risk of persecution in their home countries should be allowed to stay in the UK.”

“In an apparent bid to reduce asylum numbers, the Home Office is sometimes resorting to the despicable tactic of refusing to believe that refugees are gay, even when they provide evidence of same-sex relationships and witness statements from their current or former partners. If this evidence is not good enough, how are refugees supposed to prove their sexual orientation? It is an impossible task. The UK Border Agency seems to be making it deliberately impossible; presumably in order to boost the numbers being deported to satisfy the anti-asylum lobby. This is shocking and shameful.

No one in government is taking responsibility to end this injustice. Ministers are doing little or nothing to stop this on-going unfair treatment of LGBT refugees.The UK is not honoring its obligations under the Refugee Convention”

Many examples of last minute scrambles by LGBT activists, including myself, can be found on the pages of my BLOG and others, in our desperate attempts to reach authorities to save asylees from deportation. One case in particular was that of Ugandan Brenda N, whose dramatic deportation was halted seconds before her plane was due to take off. Ugandan Kill the Gays MP David Bahati had contacted me pursuant to my article about Brenda’s impending deportation where I noted that the UK did not believe she was a lesbian, with a sinister request that Brenda be informed she would be safe in Uganda after she reforms and relinquishes ‘her lesbianism.”  I provided an affidavit for the Court, noting that Bahati himself believed that Brenda is a lesbian, whereupon she was pulled off the tarmac.

Tatchell, in his release cited the case of a Malawian lesbian refugee, Esther C. who was scheduled for deportation twice, despite seeking a judicial review of the decision to refuse her asylum.

“What kind of justice system attempts to deport people before their cases are heard?” implored Tatchell.  Esther has now won a last minute reprieve but this was only due to a determined campaign to save her from deportation.

Tatchell notes more cases:- “On 16 October, Alice N, whose asylum claim had been dismissed on the grounds she and her female partner had not done enough to prove her lesbianism, was deported to Cameroon, despite the well-known anti-gay witch-hunt that is happening in that country.

Just over two weeks ago, a masculine gay Nigerian man, Olalekan M Ayelokun (Ola), who provided testimonies of his homosexuality from male sexual partners, was deported after a judge refused to believe he was gay.”

“We are helping many genuine LGBT refugees who tell heart-breaking stories of discrimination and violence in their home countries. These are very vulnerable people who have suffered greatly. They’ve shown great courage, given their persecution in their countries of origin and their subsequent mistreatment here in Britain.

These people have come to the UK expecting a safe haven, only to be thrown into a detention centers and treated like common criminals. When they protest against the appalling way they are treated, they can face punitive action and be subjected to fast-track deportation.”

Exacerbating the problem is the fact that many LGBT asylum applicants have poor legal representation. The legal aid system does not provide solicitors with sufficient funds to prepare a proper case. Some are listed for deportation before their appeals or judicial reviews are heard.

“The asylum system is failing them. They are not being given a fair hearing. We are calling on the coalition government to reform the asylum system to end the deportation of LGBT people who have a sincere, well-founded fear of persecution,” said Patel.

Brenda Namigadde is a lesbian who remains at great risk for deportation back to Uganda, a Country where gays and lesbians are criminalized and subject to harsh treatment at the hands of the authorities, public and family members.

Uganda lesbian to be deported tonight

Despite protests a 22-year-old Ugandan lesbian who was the victim of violent anti-gay abuse in her home country is to be deported back there from the UK tonight (Friday 22).

UK to Deport Uganda Gay Man, Robert Segwanyi, despite Torture and Risk to his Life

On June 20, 2010, Robert Segwanyi fled Uganda, seeking asylum in the United Kingdom, weeks after having been tortured for ‘homosexuality.’ 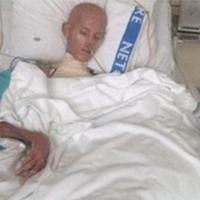