You are here: Home » Hundreds of thousands of French Catholics, Evangelicals and Muslims protest at Eiffel Tower against Gay Marriage

Hundreds of thousands of French Catholics, Evangelicals and Muslims protest at Eiffel Tower against Gay Marriage 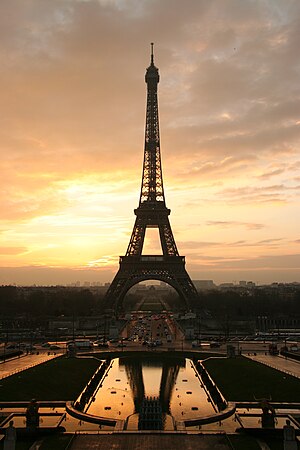 This image was selected as a picture of the week on the Malay Wikipedia for the 6th week, 2010. (Photo credit: Wikipedia)

The Eiffel Tower was not looking so friendly to Paris and Gays today as several hundred thousand people  converged on the Eifel Tower in Paris on Sunday to protest against President Francois Hollande’s plan to legalize same-sex marriage and adoption by June, 2013.

Many came after long train and bus rides from the provinces.

Hollande has pledged to push through the law with his Socialists’ parliamentary majority but the opponents’ campaign has dented public support and forced deputies to put off a plan to allow lesbian couples access to artificial insemination.

Champ de Mars park at the Eiffel Tower was packed, but turnout estimates varied widely. Organizers claimed 800,000 had protested, while police put the number at 340,000, high even in protest-prone France.

Strongly backed by the Catholic Church hierarchy, Barjot and groups working with her mobilized church-going families and political conservatives as well as some Muslims, evangelicals and even homosexuals opposed to gay marriage to protest.

Hollande’s office said the turnout was “substantial” but would not change his determination to pass the reform.

“The French are tolerant, but they are deeply attached to the family and the defense of children,” said Daniel Liechti, vice-president of the National Council of French Evangelicals, which urged its members to join the march.

Opponents of gay marriage and adoption, including most faith leaders in France, have argued that the reform would create psychological and social problems for children, which they believe should trump the desire for equal rights for gay adults.http://www.usatoday.com/story/news/world/2013/01/13/gay-marriage-protest-paris/1830529/

AP Reports : French civil unions, allowed since 1999, are at least as popular among heterosexuals as among gay and lesbian couples. But that law has no provisions for adoption or assisted reproduction, which are at the heart of the latest debate.

Hollande’s Socialist Party has sidestepped the debate on assisted reproduction, promising to examine it in March after party members split on including it in the latest proposal. That hasn’t assuaged the concerns of many in Sunday’s protest, however, who fear it’s only a matter of time.

“They’re talking about putting into national identity cards Parent 1, Parent 2, Parent 3, Parent 4. Mom, dad and the kids are going to be wiped off the map, and that’s going to be bad for any country, any civilization,” said Melissa Michel, a Franco-American mother of five who was among a group from the south of France on a train reserved specifically for the protest.

Support for gay marriage — and especially adoption by same-sex couples — has been particularly tenuous outside Paris, and people from hundreds of miles from the French capital marched Sunday beneath regional flags with emblems dating back to the Middle Ages, chanting “Daddy, Mommy.”  http://www.washingtonpost.com/world/europe/french-rally-against-gay-marriage-brings-hundreds-of-thousands-to-paris/2013/01/13/f73cc8fc-5d65-11e2-8acb-ab5cb77e95c8_story.html