Should apologize to Uganda’s Gay community, the U.K. LGBTI Community and to Bloggers he unjustly accused

Since exposing Paul Shinners, as an Evangelical Christian extremist, who spoke at the Ugandan New years eve Rally, where much anti-gay sentiment was expressed by a group of pastors, local UK activists are incensed by the attempted manipulation by Shinners of local St. Neots press, where he attempted to paint his support of the Ugandan Anti-Homosexuality Bill as untrue.

Shinners’ issued a statement that he is not homophobic. However while he has admitted making the remarks at the rally, he has failed to provide specific answers to the questions regarding what his remarks meant, the most important of which is what he meant by the word “PLAN” if he was not referring to the Anti-Homosexuality Bill:-

“There is no other nation world over that has such a plan and through this, Uganda is going to be blessed,” Said Rev. Paul Shinners.

This remark expresses the known Evangelical battle cry against homosexuality.  What Evangelicals believe is that for as long as a country accepts homosexuality, it will lose the hand of God’s protection. When a plan such as the Anti-homosexuality bill is implemented, and it calls for the killing and life imprisonment of of gays, God will bless that country and protect it. This is the view that Shinners subscribes to, unless of course he can attribute another meaning to his use of the word “PLAN,” given, also,  the context of the remarks made by the other preachers on the same stage that night, where all in unison called for passage of the Kill the Gays Bill.

To counter the accusations all Shinners could blog was:

“The purpose of my visit on the 31st December 2012 to The 7th National Day of Prayer in Uganda was simply to preach the Good News of the Gospel of Jesus Christ, which I did.This event is a New Year’s celebration for Christians and non Christians alike. It is NOT an anti-gay rally as has been wrongly stated on Facebook.I am NOT HOMOPHOBIC. Never have been. Never will. I have NEVER ever made any homophobic comments. As Christians we follow the commands which Jesus taught, to LOVE GOD AND LOVE PEOPLE. That means ALL PEOPLE, irrespective of race, colour or sexuality.I do not and will not support any legislation or law which condemns anyone on the basis of the above criteria. However, It is also not right to slander or demonise Christians on Facebook. I would ask that people respect my staff and customers at Cornerstone. We had to close the shop on Saturday 5th January as they were frightened to come in. This is not right. I hope that this clarifies our position.

However this does not clarify nor explain Shinners remarks in Uganda and he has failed to clarify the use of the words, while never denying actually making the statement.

Bishop David Kiganda, (who you can see on the same poster as Shiners and who heads the Rally ) was one of the pastors spearheading the call for the anti-gay bill, and while sharing the event stage with Shinners and others, noted in his  New Year’s rally speech:

“We ask Members of Parliament to stop wasting time debating the Bill but simply pass it to save school-going children, who are at risk of being recruited. Our leaders should desist from any act that would frustrate this proposed law…”

It would take a great deal for Shinners to explain his way out of his own remark, given this context and the use of the word “PLAN.”  His feeble statement failed miserably.  Many e-mail requests later from Melanie NathaN, Barry Duke and DB Law, Shinners has yet to deny his words or explain what they meant.So instead of attempting to set the record straight, Shinners’ strategy was to attack the messengers, Melanie Nathan me and another blogger Barry Duke for exposing his anti-gay tirade.  Shinners cried foul and played victim when he was exposed and tried to manipulate the U.K.local press into believing that Nathan and Duke had defamed him. He told the press that he had asked us for apologies, which was a blatant lie. He never did.  However even if he had, defamation can only be found if something is untruthful, and Shinners has yet to deny his easily proved remarks.

A local blogger in St. Neots , DB Law has tried on several occasions to get together with Shinners, however the preacher kept cancelling the meeting.  What Shinners does not realize is that we are going to keep drawing attention to his Ugandan remarks until he explains what he meant by the word PLAN, answers the numerous other questions posed to him in writing, or until he apologizes to the Ugandan Gay Community for what he may want to admit was a mistake or lapse in judgment on his part – unless of course it was not.  Shinners also owes Melanie Nathan and Barry Duke an apology for his unwarranted accusations where he accused us of defaming him, when he knows that is he cannot deny nor explain his remarks.

Some two months after his remarks in Uganda, and being sent a copy of the Anti-Homosexuality Bill in an e-mail from me, Shinners pompously noted in an e-mail to DB Law that had he known “sooner” about the Kill the Gays Bill, he would have been able to exert influence to the Ugandans to drop the Bill.  He has had 8 weeks to implement his so called ‘influence’ and has still done nothing to indicate that he has made any outreach to Uganda’s Evangelical or Political community to thwart the Bill at all. (See https://oblogdeeoblogda.me/2013/02/13/u-k-preacher-paul-shinners-claims-he-could-have-stopped-the-anti-homosexuality-bill-in-uganda/)

Here is the most recent report in the local St. Neots Paper, The Hunts Post:-

“Barry Duke, editor of the atheist magazine Freethinker, and the human rights campaigner Melanie Nathan, who writes the blog http://oblogdeeoblogda.me, insisted they were right to post the items about Cornerstone Cafe owner Paul Shinners on their respective websites.

The pair alleged that Mr Shinners had said that Uganda, the country he was visiting, would be “blessed” if it passed the controversial Anti-Homosexuality Bill – a claim Mr Shinners vehemently denies.

However, Ms Nathan said she would not apologise for the post and said Mr Shinners had not contacted her directly to ask for an apology.

“There is no question about it in my mind at all,” she said. “He stood on that stage and spoke those words.”

Ms Nathan said she used “blogger’s licence” to report his words as quoted by The Daily Monitor newspaper in Uganda. She said she did not contact him to ask him about his remarks until after she had posted the piece.

Mr Shinners says the quote was not related to the anti-gay bill and that she and Mr Duke should have contacted him first for an explanation.

“People picked it up and ran with it,” Ms Nathan said. “I’m actually really glad it went where it did. People from his local area started to ask questions about the guy in their midst.”

Mr Duke, who lives in Spain, said: “He hasn’t explained an awful lot about how that comment came about. If he has a genuine, plausible explanation I would be more than happy to discuss with him, carry a statement to that effect and blog it accordingly.” 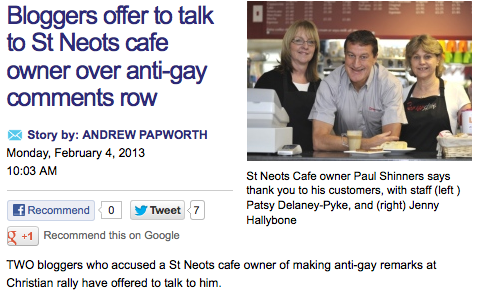 26 thoughts on “St. Neots U.K. Preacher Paul Shinners has yet to answer questions about his anti-gay remarks”