You are here: Home » OUTING Red Pepper owners and staff for persecution of Gays in Uganda 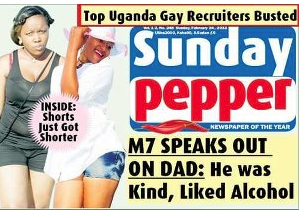 For many years, the Ugandan tabloid, Red Pepper has purposely targeted alleged gay, lesbian and transgender people, outing them in the print magazine, often using pictures accompanied by pervasive rhetoric.    The most recent publication with photos and names, outed alleged gays and lesbians in a print publication dated Sunday February 24, 2013, accusing them, falsely, of the myth of so called “recruitment into the lifestyle of homosexuality.”

Ten years ago, the tabloid  started off as the venture of a group of entrepreneurs who set out to rock Uganda with gossip and morphed into a power force from its first print of 1000 copies copies on a weekly basis to a  circulation of over 10,000 copies daily, including Sundays. It is now the third highest circulation for daily newspapers after the market leaders The New Vision and Daily Monitor, in Uganda, making the outings of  gays especially onerous.

The Tabloid, fearless in its expose, has gone a little too far in outing Uganda’s gays,  given the context of Uganda’s hate of homosexuality and the known consequences of such outings for gay people, which includes persecution, eviction, firings, assaults, arrests, expulsion from villages and in some cases torture.

Imagine waking up in gay-hating Uganda, a country frothing at the bit to pass the Kill the Gays Bill, labeled the worst place to be gay, to find yourself outed on its pages.  This has happened over the years to numerous LGBTI Ugandans and some who were not even gay. 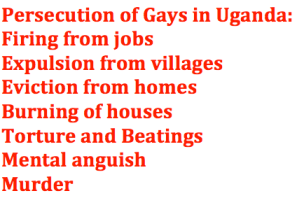 The consequences of such an outing in Uganda are well known and can be attested to by the many gay Ugandans who have had to flee and others now in safe houses. Some of these people have sought asylum in foreign countries.  I have personally interviewed people who are either still in Uganda or have fled to Sweden, France, the United kingdom, and the U.S.A  and they have related similar personal experiences, all noting the resulting persecution, including physical assault and mental torture.

Now that we have years of proof of the persecution of these LGBTI Ugandans, recounting how they were first outed by Red Pepper and then suffered directly after the exposure, we are able to point the finger directly back at the odious publishers and call them persecutors.

The owners, management and staff of Red Pepper have now earned a designation far worse than mere gossip-mongers, they have joined the ranks of human rights abusers and persecutors, knowing the harm that these outings will cause. This goes way further than mere gossip and they all know it.

Each time they print a picture and the name of a person who they determine to be gay,  they know exactly what is in store for that person. By participating in this publication they may as well directly call for the firing, the expulsion from villages, eviction from homes, burning of houses. the beatings, the torture and even the deaths of their fellow Ugandans.  No matter how much they may abhor homosexuality, their behavior in doing these outings, often risking false accusations too, is simply reprehensible.

RED PEPPER YOU ARE FAIR GAME:-

We hereby put on notice and OUT the following Ugandan Persecutors:

We in the international community must OUT these persecutors, and in so doing keep track of the direct harm they have caused to LGBTI Ugandans. We will maintain evidence to use for any future retribution against Red Pepper’s staff and ownership and so we are recording the actual evidence which we can attribute to the persecution that was a direct result of these outings.

We will also ensure that anyone who has participated in these despicable outings are not welcome anywhere else in the world; and that if they do travel to international countries, that they are detained for their crimes against humanity. These names will be provided to the U.S. State department and the U.K. Foreign office following publication of this article.

The tabloid was started by seven partners, two of whom  have since left the venture. The remaining five include Richard Tusiime,  Managing Director and Executive Chairman,  Arinaitwe Rugyendo, Director in charge of marketing,  James Mujuni  business development and Patrick Mugumya, the Operations Director. 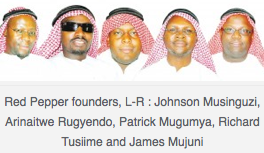 Now it is our turn to take action: 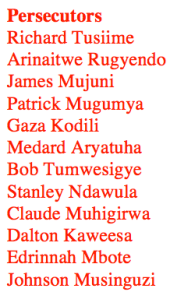 I believe that what they have done  must be adjudicated in the international community.  Those associated with Red Pepper have knowingly committed crimes against humanity and while they may be protected within Uganda, they should not receive that protection when traveling into international territory.

Knowing the anti-gay fervor, and the current call by 90% of Ugandans to kill gays through the passage of the horrific Anti-Homosexuality Bill (AHB), outing in Red Pepper is tantamount to a call for their lynching, a call for the persecution of those they specifically out.

Once the Anti-Homosexuality Bill passes, it will, according to Ugandan law place a duty on a person to report a known homosexual. That law may well be valid in Uganda when it passes, though subject to tests of constitutionality, by Uganda’s independent courts. However the great unknown will be how the international community will address the law in the international forum and any Government sanctioned deaths that result from it as well as the resulting persecution.  The world will probably seek retribution, even against those who comply with those laws.  A great comparison will be the Nuremburg Trials after the Second World War.

In this case, the Kill the Gays Bill has yet to pass and the editors at Red Pepper may well be underestimating the harm they have already caused. I was contacted this past week by one of the people outed in a Red Pepper issue. This person had never appeared in the media as openly gay previously and that person has now left home, is without work, and is seeking safety. That person’s entire life is ruined, not to mention the terror at being seen by anyone in the country who has seen the photograph.

I believe that this “outing” of gays by Red Pepper is questionable and subject even in Uganda to fines and interdict (restraining order) at this time. But I am not Ugandan and who am I to suggest that they be sued, even though there is precedent for the success of such lawsuit, as we saw when (now murdered) David Kato and other Ugandan LGBTI activists successfully sued the Ugandan Tabloid in 2010, Rolling Stone. Ugandans may be reluctant to sue also for fear of reprisal by the very powerful media conglomerate.  Some still suspect that the lawsuit brought against Rolling Stone by David Kato, may have been linked  to the renowned activists murder, a couple of months later.

However when it comes to the international community’s responsibility, noting Uganda is a signatory to International Human Rights treaties too, we are obligated to hold those who have persecuted others accountable,  according to international standards.   We as Americans have a duty to call for justice in international tribunals and to ask the U.S. State department to ensure that these international criminals be prevented from entering our country.

We  in the international community must OUT these persecutors, and in so doing keep track of the direct harm they have caused to LGBTI Ugandans.  We will maintain evidence to use for any future retribution against Red Pepper’s staff and ownership and so we are recording the actual evidence which we can attribute to the persecution that was a direct result of these outings.

We will  also ensure that anyone who has participated in these despicable outings are not welcome anywhere else in the world; and that if they do travel to international countries, they are detained for their crimes against humanity.  These names will be provided to the U.S. State Department and the U.K. Foreign office following publication of this article.

CAVEAT/DISCLAIMER:  NO ONE in Uganda nor any Ugandan contributed in any way to this article and so NO ONE should be further persecuted by misguided retribution.