You are here: Home » Murder of Ugandan lesbian deportee at the hands of UK authorities, Reliance Security and Qatar Airlines

Murder of Ugandan lesbian deportee at the hands of UK authorities, Reliance Security and Qatar Airlines 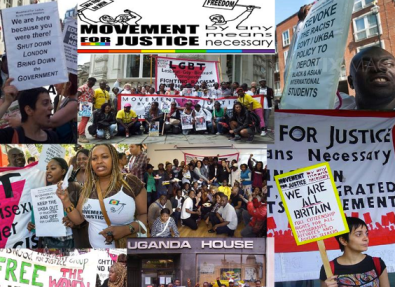 Yesterday we reported the story of the death of Jackie Nanyonjo.  Now U.K. activists are calling it murder – read  The Movement for Justice report below.  The question is who is responsible. Evidence is emerging that Jackie was not well while incarcerated by U.K. authorities for two months, during which time she fought against her deportation back to anti-lesbian and anti-gay Uganda, where she believed her life was in  danger. Her family was given limited access and sources have informed me that she did not receive the medical treatment or care she needed while in detention.  This triggered a series of events where perhaps one can allege that Qatar Air and Reliance Security became accessories to her murder. Surely there ought to be accountability and justice.

The report below calls it murder and places blame squarely on the UK Border Agency, the Yari Wood Detention Center, the  security company RELIANCE, who undertook her deportation, and QATAR Airlines.

When detainees are deported they are advised to physically fight off the security guards. The law is that if a detainee fights, the guards are not supposed to fight back, nor forcefully restrain the deportee. Jackie believed her resistance would save her because this usually results in deportees not being put on the plane. Clearly the guards and security contractors did not follow the law in the case of Jackie:-

“On 10th January, on Qatar Airways Flight QR76, Jackie fought bravely for her freedom with all the strength she could gather against four Reliance guards. She continued fighting when the guards drew curtains round their end of the plane to hide their crimes. She struggled for as long as she could until, beaten up, half strangled and bent double, she was overcome by the pain in her chest and neck and was unable to breathe.” The Movement for Justice

UK Border Agency – GUILTY of the Murder of Jackie Nanyonjo

Put the UKBA on Trial…

Theresa May Must Go!

Jackie Nanyonjo died in Uganda last Friday as a result of the injuries inflicted by the Home Office’s licenced thugs who deported her from Britain on 10th January. Jackie was a fighter for herself and for others: a lesbian who escaped from anti-gay persecution and a brutal forced marriage, and a member of the Movement for Justice. In Britain she had been able for the first time to live and love openly as a lesbian; she was much-loved by a wide circle of friends who kept in touch with her after she was deported and who miss her deeply. All of us who knew her, or who didn’t know her personally but are determined to end the regime of racism and anti-immigrant bigotry that is responsible for her death, will fight to win justice for Jackie.

Jackie had been through the mental torture of the immigration and asylum system, with its arbitrary, subjective decisions and impossible demands to ‘prove that you are a lesbian’. UK Border Agency and an Asylum Tribunal had dismissed out-of-hand the ample evidence of friends and her partner that Jackie was a lesbian and rejected her claim for asylum. She was sent to the further mental torture of Yarl’s Wood women’s detention centre in November 2012 – a few weeks after detainees had shaken the power of the UKBA in an uprising of mass protest against brutality and injustice led by the Yarl’s Wood Movement for Justice group and Jackie had been part of a solidarity demonstration at the UKBA headquarters in Croydon. Jackie continued her fight in Yarl’s Wood. When the UKBA tried to deport her in December Jackie resisted bravely despite the brutality she suffered at the hands of the ‘escorts’ provided by the contractor, Reliance. She forced them to abandon the attempt and when she got back to Yarl’s Wood she lodged a complaint to the UKBA – a complaint the UKBA rejected.

With all the limited avenues of Britain’s racist immigration laws closed to her and facing deportation to a country where it is a crime to be gay and where the political and religious leaders have whipped up a murderous anti-gay witch-hunt, Jackie’s only option was physical resistance. On 10th January, on Qatar Airways Flight QR76, Jackie fought bravely for her freedom with all the strength she could gather against four Reliance guards. She continued fighting when the guards drew curtains round their end of the plane to hide their crimes. She struggled for as long as she could until, beaten up, half strangled and bent double, she was overcome by the pain in her chest and neck and was unable to breathe.

Family members  met her at the airport, and after the flight had landed, Jackie was in terrible pain and vomiting blood; they rushed her to a clinic, but in a country with widespread poverty and limited medical facilities they were unable to get the medical attention Jackie needed. Since Jackie was in hiding as a known lesbian, protected by relatives, every trip to a doctor or hospital involved a risk to her life and to the safety of her family. They were condemned to watch the agonising decline of Jackie’s health and strength over the next two months.

The Home Office and the UKBA are guilty of Jackie’s murder. They have licenced the brutality that Jackie suffered, even if they pretend ‘to look the other way’; they protect the thugs and the security companies if an asylum seekers’ death or injury becomes public knowledge. Their policies and decisions are responsible for Jackie’s death. The guards who brutalised Jackie should be in jail and Reliance should be condemned as an accessory to murder, along with Qatar Airways and the repressive Qatari Government that is so willing to do Britain’s dirty work – but the real guilt lies with the politicians and bureaucrats who run the Home Office and the UKBA, and ultimately with the Coalition Government. Jackie Nanyonjo was a victim of the immigrant bashing policies of Theresa May, the racist Home Secretary.

The Movement for Justice is putting the UKBA on trial for Jackie’s murder. Jackie is by not the first person to die at the hands or through the actions of the UKBA but we want to make sure that she is the last. Justice for Jackie means above all exposing the UKBA before the Court of Public Opinion, challenging its power so that what happened to Jackie never happens to anyone else, and shutting down Yarl’s Wood detention centre. It means building the movement that Jackie joined, in Yarl’s Wood and other detention centres and outside, in our communities and on our campuses, and end the injustice of detention and deportation. Join us this Thursday at the demonstration and speak-out at the Home Office on Marsham Street, London SW1.

Open Borders & Equal Citizenship for All!

10 Comments on “Murder of Ugandan lesbian deportee at the hands of UK authorities, Reliance Security and Qatar Airlines”