Accused murderer fears for his life in prison after assault

The trial of the Afrikaner right wing extremist, accused of murdering  a young man who was sent to his camp to “man up” commenced in Vereeniging, South Africa, yesterday and is set to continue through the next few days, amidst a heavy police presence. Scores of  right wing extremists from the local groups were present at the court in support of  the accused Alex de Koker, resulting in the need for deployment of police troops inside and outside the court.

Last month we reported the shocking case here on OBLOGDEE of the owner of Echo Wild Game Rangers, Alex de Koker, 49,  and his co-accused, Michael Erasmus, in the murder of a young effeminate teen, Raymond Buys, aged 15 when he died in April 2011.  The men are facing several charges including murder, child abuse and neglect, and assault with intent to do grievous bodily harm.

The police asserted an extra show of force outside and inside the court, after obtaining information that de Koker supporters would try to aid him to escape. The police were armed with R5 assault rifles.

In a twist of events, de Koker told the court that he was scared and feared for his life while in prison awaiting trial. When the magistrate, Retha Willemse, ordered that de Koker, 49, be returned back from Green Point Prison in Deneysville to Leeuhof Prison, in Vereeniging,  where he had been previously assaulted,  because the latter was more convenient for transport to Court, de Koker reacted strongly, showing his fear.   A coward indeed when faced with the very fear that young Buys awoke to each morning while suffering two months of abuse at the  (alleged) hands of de Koker. However the magistrate did order that he be detained in a single cell.

Raymond Buys died on 20 April 2011, after he attended the training camp for rangers in Vereeniging where it is alleged that he was repeatedly assaulted, starved and abused, in an attempt to eradicate his “effeminate ways” and have him “man up.” A source reported that young men like Buys have been perceived as “moffie” – (Afrikaans derogatory term for gay) and were sent to this camp to change.  The camp is considered a venue for those following the far-right ideology and was previously used as a training camp for the militia of the Boere Force and AWB. The very groups who had shown up to Court to support de Koker and who it is believed could attempt to free him.

Yesterday Boer Force members and members of the AWB, who had previously tried to distance themselves from de Koker, all participants of the right wing Afrikaner extremist movement, attended the trial in large numbers, for the first time in support of de Koker.  A so called “Brig.” Hannes van Zyl of the Boer Force said the trial was unfair and that witnesses were intimidated by the police.  However the fact is witnesses are being protected by the extra police, who were called in to thwart the threat of van Zyl and the other members of the Boer force and the AWB, who had shown up in force and are well known for their claims to military status.

This is a case of crying foul and playing victim when in fact the show of force by the renegade militia themselves, known white supremacists, is a means to intimidate witnesses, and intended as a threat to the legal authority of the prosecution and the police.

The state witness and the murder victim’s tent mate Gerhard Oosthuizen (19), is under cross-examination and the case continued through today.  He tells the story of the extreme pain and suffering inflicted upon Buys. When he saw what was happening to his tent mate, he ran away in fear. Gerhard is himself a member of the Afrikaner community and may well suffer intimidation by the Boer Force and AWB members for being a States witness against de Koker, making the  added case for the requisite police protection, as well as the fear that the mililtia extremists serve as a threat to facilitate the escape of de Koker.

De Koker and Erasmus pleaded not guilty to the charges.  However Buys is the third child in de Koker’s training camps to be murdered. De Koker was found guilty in one of the previous cases and for some unknown reason was allowed to continue to operate his camp, unfettered. Some suspect a cover up amongst the Broederbond  and AWB, far right wing militia community.

Gerhard Oosthuizen testified that Buys walked hunched over and that he was very weak and unable to work, yet de Koker continued to force him to work. He further testified that  Buys was beaten with pipes, planks, sticks and plastic pipes if he did not perform his jobs correctly. He testified that Buys was forced to eat washing powder after he accidently had knocked it over, causing him to foam at the mouth and to vomit. The Court was told that Buys had severe diarrhea for two weeks. The cross-examination continues this morning.

THE STORY OF THE MURDER OF BUYS went viral from this post in April 2013. Buys was murdered in 2011. Very little media attention has been given to this case in South Africa: READ MORE – 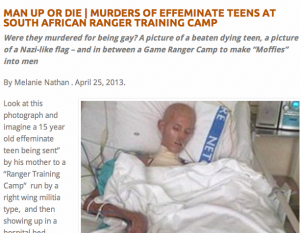 The horrific story surrounding the murder of Buys can be read here:  http://oblogdeeoblogda.me/2013/04/25/man-up-or-die-murders-of-effeminate-teens-at-south-african-ranger-training-camp/