You are here: Home » ENDA passes out of committee push underway for 60 votes 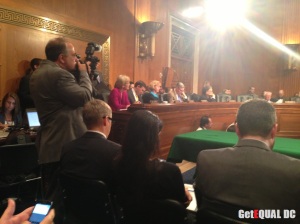 Today in a wham bam no discussion just majority and minority opening statements hearing, Senate Bill 815, the Employment Non-Discrimination Act (ENDA) was passed out of the U.S. Senate Committee on Health, Education, Labor, & Pensions (HELP) in a 15-7 vote.

All Democrats voted in favor joined by 3 Republicans – Kirk (R-IL), Murkowski (R-AK) and Hatch (R-UT).  HELP Committee Senator Tom Harkin (D-IA) noted that it is the first time a transgender-inclusive ENDA has gone to the Senate for a vote.

Ranking Member Sen. Lamar Alexander (R-TN) who offered up the Bill’s accepted three amendments turned around and voted “no” in opposition to its passage.  The amendments included allowing a company to assign a transgender employee to either gender’s bathroom or shared facility, and another would require EEOC to define gender “transition”.  Presumably that leaves all negotiations to back room dealings before and during Senate discussions before it comes to a floor vote.

With no discussion regarding the bill, there was not a single peep today regarding the broad religious exemptions that allow any religiously affiliated employer free reign on workplace discrimination.  We have written about those on this BLOG here.

But have yet to hear again from the legal groups – ACLU, Lambda Legal, NCLR, and TLC – who had previously expressed ‘grave concerns’ at the Bill’s introduction? 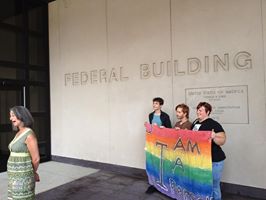 Now the push is on for the required filibuster-proof 60 votes.  This afternoon, GetEQUAL is beginning their push for Senator Rob Portman’s (R-OH) vote with a press conference featuring two Ohio moms whose sons have been discriminated against in employment, one mom’s son gay and the other is only perceived to be gay.

GetEQUAL’s press advisory is here.  You might remember Senator Portman famously flip-flopped on his support for marriage equality after learning his son is gay.  He has yet though to show concern for his son’s employment security.

Currently, there are 53 co-sponsors plus today’s pick ups of Murkowski and Hatch. That leaves 5 more votes required at a minimum barring any commitment(s) lost due to potential changes of the bill that could happen on the Senate floor.

This list of Senate co-sponsors is here.  Please take the time to see whether or not your Senator is currently supporting S.815 or not.  If yes, drop them a quick thank you email for their continued support.  If they are not, please give them a call and tell them to get on board!