Bradley Manning was charged in a 22 count indictment for releasing classified intelligence information to WikiLeaks. Yesterday the judge found Manning innocent of the most serious charge of ‘aiding the enemy’ and just one of the charges of violating the WW1 era Espionage Act.  For the remaining 20 charges, Manning was found guilty.  Today sentencing began.  It is expected to last at least a week with the government calling some 20 witnesses.  Manning is facing up to 136 years, or basically the rest of his life in prison.

We should all stop and question what the stifling of dissent and whistleblowers like Manning means for all of us.

What does Manning’s conviction mean for the First Amendment? The Center for Constitutional Rights posted:

Government employees who blow the whistle on war crimes, other abuses and government incompetence should be protected under the First Amendment.
We now live in a country where someone who exposes war crimes can be sentenced to life even if not found guilty of aiding the enemy, while those responsible for the war crimes remain free. If the government equates being a whistleblower with espionage or aiding the enemy, what is the future of journalism in this country? What is the future of the First Amendment? 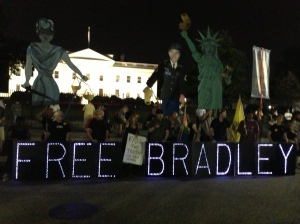 Where have the LGBT rights groups been? The Guardian commented yesterday that despite international outcry over Manning’s abhorrent treatment at the hands of the U.S. Government, spending the last year awaiting trial in solitary confinement, not a peep had come from LGBT groups questioning why? The Guardian article rightly asked:

With his slight frame, lower-class background, questioning of his gender identity, inability to hold down a typical job, general dorkiness and dysfunctional family life, Manning does not fit the poster boy image that GLAAD or the Human Rights Campaign would hold up and promote. It’s bizarre because Manning is actually what many, if not most, LGBT people have been at one point or another – an outsider, a loner, a person who does not fit in or conform.

Now, as we head off to protest Russia and its anti-fay draconian rule, you have to wonder where will the dissent come from for the losses of our own rights? Our ability to protest the government, to forcefully demand our full and equal rights, has been greatly crippled with the near unanimous passage of the Anti-Protest Law in March. Our First Amendment protections continue to shrink. Our telecoms and software giants aid and abet the NSA spying on us all. It’s not just the whistleblowers whose rights have been diminished – it’s all of ours.

← Minnesota will celebrate marriage equality at midnight
Protests of Russian Violations of LGBT Human Rights at U.S. Embassy and Consulates →