Churchgoers flee fearing the wrath of a Rainbow? 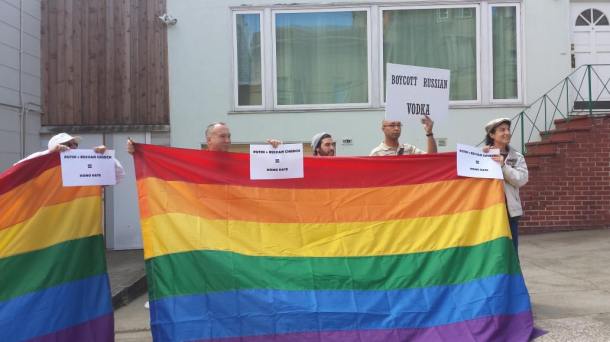 Outside the front door of the home of the priest from the Russian Orthodox church in the Castro are rainbow flag bearers and signs in Russian saying GAY is OKAY.

On Sunday, Gays Without Borders together with members of San Francisco’s LGBT community paid a visit to St. Nicholas Cathedral Church, a Russian Orthodox Church located in the Castro to raise rainbow flags bringing awareness about Russia’s anti-gay laws and to express solidarity with Russia’s oppressed LGBT community.

We had hoped to speak to the Priest and his parishioners,  who had failed to respond to our advance e-mails and calls for dialogue. Instead knowing we would be arriving at 11.00AM, they fled early, after displaying their hostility by calling on law enforcement.

When I arrived, before any of the others, I noticed 3  San Francisco police cruisers and 2 police officers on bicycles, opposite the Church. That seemed like a huge law enforcement presence for what promised to be a very small gathering of peaceful rainbow flag wavers. Having participated in many similar events, I have yet to see such a large police turn out. Judging by the comments on my blog prior to the event, and information from a source, it is clear that the Church had called in to the police, which I believe was both intended to be retaliatory and hostile.

Unfortunately the Russian Orthodox parishioners were not there to see the beauty of those rainbow flags or the beautiful people who stood holding them – nor for that moment of silence for victims of LGBT oppression in Russia, 3 short  speeches, during which time we expressed our dismay at the Russian oppression of gays, welcomed their right to pray in the Castro and belted a very out of tune rendition of “Somewhere Over the Rainbow.”

Michael Petrelis, the organizer from gays without Border, reported:

“Members of Gays Without Borders and BoycottRussianVodka.com arrived at St. Nicholas’ Russian Orthodox Church (ROC) on 15th Street in San Francisco’s famed Castro neighborhood for a peaceful picket only to be told that Rector Leonid Kazakov had left an hour earlier in full vestments and headdress accompanied by members of the church.”

On June 30th Russian President President Vladimir Putin signed into law a measure that bans the so called “promotion” of non-traditional sexual relationships,” to minors. This law is so wide it threatens arrest, detainment and imprisonment of individuals or groups found to be publicly supportive of LGBT people, issues, or equality. Punishable offenses could include public acknowledgment of one’s orientation, displays of affection between same-sex partners, statements in support of LGBT rights, and even the waving of a rainbow flag.  Since its passage, the public persecution of gays has increased. 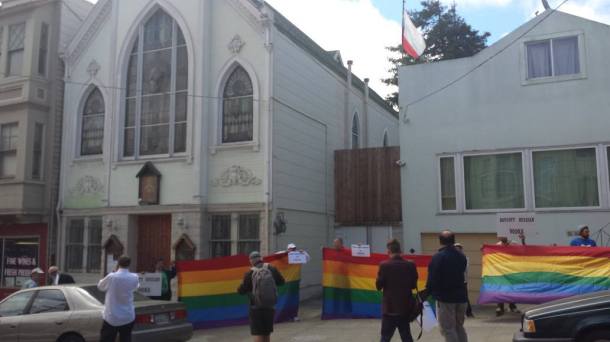 Waving rainbow flags would have had us arrested in Moscow and so when the churchgoers exaggerated their concerns to the SFPD, soliciting the large and expensive police presence as a backdrop to their early flight from the scene, perhaps they did not realize that we do not get arrested in the Castro for holding a rainbow flag, as perhaps they had hoped we would, just as would be the case in Russia. Thank you ST. NICHOLAS for helping us emphasize our point!

And so we gathered our large rainbow flags, draping one over a building across the way and held the others outside St. Nicholas Cathedral. When the police saw us they left and only 2 officers on bikes remained at a one block distance. The event was peaceful and we accomplished media attention with a report on local TV news as well as Russians reporting back to Russian Government and media.

We stood aside from the Church and did not block the path. But when we confirmed that the parishioners were not there anyway, we stood in front of the Church door for a quick photo opportunity that took about 3  minutes and then we all left.

While a strong movement is now developing which calls for the repeal of the anti-gay laws in Russia and the arrests of vigilantes who are kidnapping and torturing gay teens on the Streets of Russia, we will continue to picket places that support the Russian oppression, such as St. Nicholas Cathedral in the Castro district, which  is under the control and direction of Patriarch Kirill, who in December 2010 appointed Father Leonid Kazakov of the St. Petersburg diocese to lead the San Francisco church.

Russian Orthodox Patriarch Kirill I, who lives in Moscow, is a leading proponent of the anit-gay law. Patriarch Kirill is a longtime supporter of Russian President Vladimir Putin and the two leaders both strongly back the recently enacted anti-gay propaganda law that bans any pro-gay statement or demonstrations in public or private and on the Internet. The law has drawn international condemnation.

It was a shame that the members of St. Nicholas did not take the opportunity to meet with us. This action Sunday was designed to show the love and beauty of LGBT people through the display of the rainbow flag, our international symbol of acceptance and respect for our community. At the same time we were prepared to speak up for the boycotts.

Petrelis Files.  A gay neighbor came over and told the protesters that he had seen the rector and congregants leave the church roughly 30 minutes earlier and drive off to an unknown location. The church and the rector’s home were locked. There were no members of the church present at any time before or during the action.

Joining the American protesters were several gay and straight Russians whose last names are being withheld for confidentiality reasons. One gay Russian named Vladimir, who has resided in the U.S. for more than 20 years, conveyed his support for all efforts on behalf of Russian LGBT people. 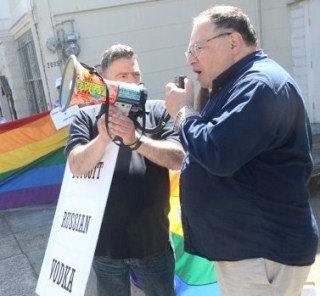 Anatoly, pictured at right, a straight Russian, said he was a friend of the gay community and wants the ROC hierarchy to stop hating LGBT people. Anatoly spoke in Russian and English to the crowd. 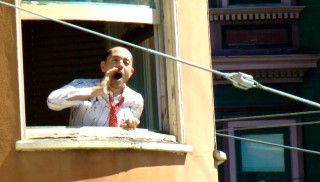 From across the street, another gay neighbor, pictured, leaned out his window to shout approval of the picket and he hollered his own slogans of gay liberation.

As one of the speakers I noted that San Francisco and particularly the Castro has always stood proudly as a beacon of hope for freedom and equality for all LGBTI people around the world, and it cannot in good moral conscience support Russian interests in silence until the onerous anti-gay law is fully repealed.   St. Nicholas like all churches are welcome in the Castro. We respect the religious freedoms of the Russian Orthodox Church.  But just like the Church has its freedom to express its religion gay people should have the freedom to express their human sexuality. We hoped to dialogue and to inform and hence ensure that our Russian Orthodox neighbors speak out against the reprehensible persecution of gays, lesbians and transgender people in Russia at this time. If the church refuses, and remains silent, then they are complicit in the persecution.

When I sent the anonymous Russian activist who goes by the code name Goldfinch the pictures s/he noted:

“When someone mentions such strong nouns as “protest, manifest or strike”, you think about hundreds or thousands of people gathering and demanding something from government or fighting for something.  I see approximately 20 people standing in front of St. Nicholas church supporting LGBT of Russia and condemning the horrifying law against sexual minority. I didn’t see hundreds of people, but I saw people with pride and prepared to fight and support LGBT people in Moscow. I wish I could see those eyes in many other protests and strikes. People who are not afraid to fight and protect the others. And if you read this small paragraph it means that you are already fighting for LGBT rights in Russia and you are already resisting an enemy. Putin, don’t you still realize what have you done.”

UPDATED Many Articles including extensive social media discussions resulted from this action to include criticism of the ROC by members of the Church: ”

“Shame on you, Arch­bishop Kyrill, Arch­bishop Jus­tin­ian, and Bishop Theo­do­sius for your fail­ure to act “as the Mas­ter would do,” by not extend­ing the hand of fel­low­ship, of char­ity, and of Chris­t­ian love, but by your very demeanor and actions cast­ing stones of judg­ment and deri­sion upon indi­vid­u­als with whom you have never exchanged a word. “I will show you my faith by my works.” (Jam. 2:18)

Shame on you, Arch­bishop Kyrill, Arch­bishop Jus­tin­ian, and Bishop Theo­do­sius for set­ting a prece­dent and leav­ing an impres­sion that the Ortho­dox Church is unap­proach­able, hos­tile, iso­lated, an entity unto itself, inhos­pitable, and “shady” in its deal­ings with gov­ern­ment. It seems to me you com­pletely fail to see the incon­gru­ence of chant­ing the “Tri­umph of Ortho­doxy” when giv­ing the mes­sage, “you don’t belong here.” How do we answer the ques­tion, “Where do you find the Lord?” “Among the sin­ners. All sin­ners.” “Who is the Ortho­dox pas­tor?” “The one who would act as the Mas­ter would act.”

What have you pro­tected us from? Shame on you, Arch­bishop Kyrill, Arch­bishop Jus­tin­ian, and Bishop Theo­do­sius. I am embarrassed.” READ FULL ARTICLE 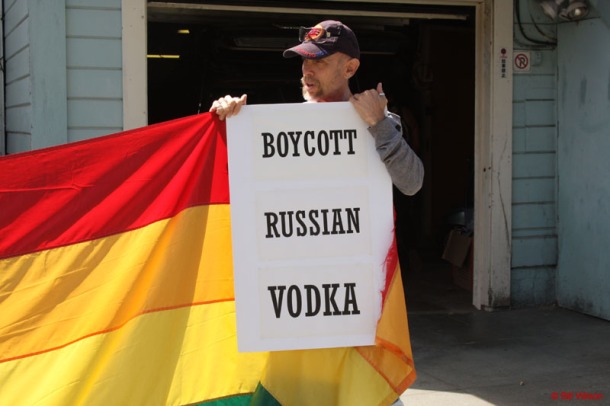 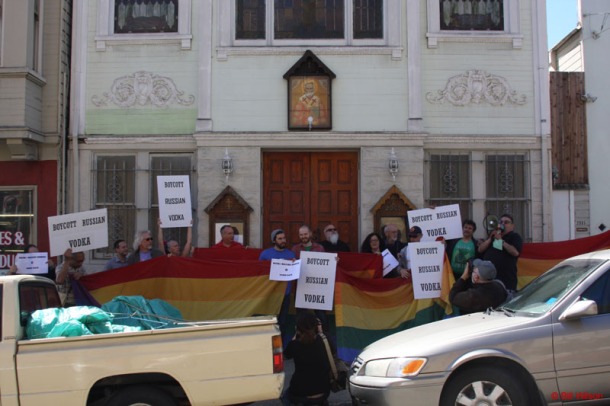 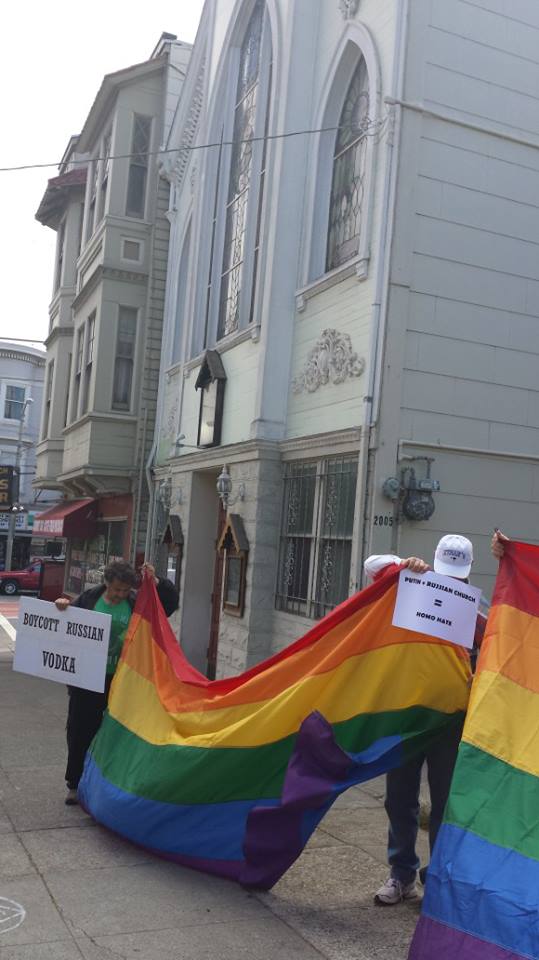