For Crimes Against Humanity 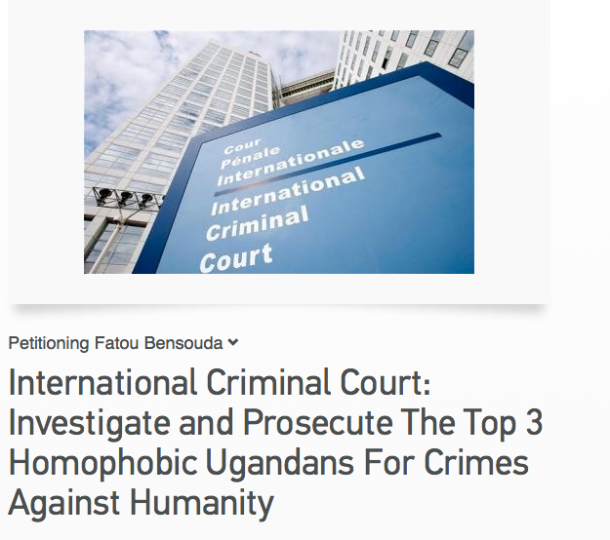 Uganda is one of the most homophobic nations in the world and it is estimated that over 500,000 L.G.B.T people in the country are at risk of harassment and discrimination. With Homosexuality already illegal in the country punishable by incarceration, there is no single law in the country prohibiting persecution of gays and so people are not scared to do it. Most Ugandans are against homosexuality but three Ugandans are at the top when it comes to persecution of gays and these are David Bahati, Giles Muhame and Martin Ssempa.

David Bahati came to international attention in October 2009 after introducing the Uganda’s Anti-Homosexuality Bill as a Private Member’s Bill on 13 October proposing that a new offence be created in Uganda named “aggravated homosexuality” which would be punishable as a capital offence. The proposals included plans to introduce the death penalty for gay adults who had sex with those of the same sex under 18, with disabled people, or when the accused party is HIV-positive, or for those previously convicted of homosexuality-related offences. Bahati has expressed a desire to “kill every last gay person.”

Giles Muhame was the managing editor of Rolling Stone. On 9 October 2010, the newspaper published a front page article—titled “100 Pictures of Uganda’s Top Homos Leak”—that listed the names, addresses, and photographs of 100 homosexuals alongside a yellow banner that read “Hang Them. It is therefore right to say that David Kato was killed by Giles Muhame since his inclusion in this article led to his death.

Martin Ssempa is a Ugandan pastor who everyday incites gay genocide in Uganda and is the face of Uganda’s anti homosexuality movement.

The above aforementioned people can never be brought to book in Uganda for what they have done to the gays and it is why I filed a complaint against them to the I.C.C calling on the court to ensure justice is served.

The I.C.C is in place to fight this impunity and this is an opportunity for it to take action against the widespread and systematic persecution of innocent gay men and lesbians in Uganda. We should never allow the above notorious homophobic Ugandans to get away with the pain they have inflicted onto the gays in Uganda and we need to stand up and take action as an International community.

This move is vital because if successful it would bring to book David Bahati, Giles Muhame and Martin Ssempa for persecuting gays in Uganda. Secondly it would send a warning message to others that persecuting someone based solely on sexual orientation and gender identity is illegal and a criminal offense punishable. Similary with the ‘Kill the Gays’ bill currently looming in Parliament, this might be an opportunity of scaring the Uganda legislators from passing it into law. Therefore I ask the International Criminal Court to prosecute the above criminals for committing a crime against humanity of persecution of gays in Uganda.

To:
Fatou Bensouda, I.C.C Prosecutor
Dear Honorable Fatou Bensouda,As an African, you’re more than informed about the depression and horrific pain that fellow Africans in Uganda who are gay go through. Many of them are evicted from homes, tortured, imprisoned,raped,denied employment, killed and others choose to leave the country to escape the widespread violence. The above persecution has been incited mainly by David Bahati, Giles Muhame and Martin Ssempa and yet no one is going to punish them in Uganda but rather they are rewarded and applauded.

Therefore you and the I.C.C judges are the only people in the entire world who can bring justice to these people for committing a crime against humanity of persecution of gays in Uganda.

The I.C.C in this case has an opportunity to engage in the fight against global homophobia while fighting impunity at the same time. Opening an investigation of this complaint and prosecuting these aforementioned individuals is vital since it would help bring them to book, discourage future persecution and scare off members of the Ugandan Parliament from passing the unpopular ‘Kill the Gays’ bill into law.

I hope and pray that you take our request into consideration.

SEE THE LETTER AND PETITION HERE

Ugandan Press is reporting that Ssempa is scared!