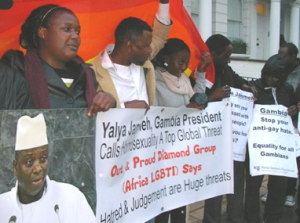 The protest was organized by the African LGBTI Out & Proud Diamond Group.

The protestors chanted: “Some Africans are gay. Get over it” and “Yahya. Ha! Ha! Why are you afraid of gays?”  President Yahya Jammeh of Gambia used his UN speech on 27 September to attack and threaten the LGBTI community, claiming homosexuality is one of the three biggest threats to human existence.

“Those who promote homosexuality want to put an end to human existence,” he told the gathering of world leaders in New York. “It is becoming an epidemic and we Muslims and Africans will fight to end this behavior.”   “Homosexuality in all its forms and manifestations which, though very evil (and) anti-human, as well as anti-Allah, is being promoted as a human right by some powers,” said Jammeh.   See here: http://reut.rs/16GyUOa

The penalty for both male and female same-sex relations in The Gambia is 14 years jail. Earlier this year, the government outlawed cross-dressing, stipulating a prison term of five years.

The persecution of LGBT people in The Gambia is in violation of the equal rights and non-discrimination clauses of the African Charter on Human and People’s Rights, which The Gambia has signed and pledged to uphold. It also violates Section 33 of the Gambian constitution, which prohibits all discrimination,” said Peter Tatchell, Director of the Peter Tatchell Foundation, who joined the protest.

50,000 British tourists visit The Gambia every year. They help sustain the economy.

He has told gays and lesbians to leave the country or he will have them beheaded; saying that LGBT people are “anti-god, anti-human and anti-civilization.”

He warned that LGBT Gambians will be shown “no mercy” and will “regret why you were born.”

“The Gambia is a country of believers… sinful and immoral practices [such] as homosexuality will not be tolerated in this country,” the president said.

He also commanded “all those who harbor such individuals to kick them out of their compounds (houses),” instructing the director of the Gambia Immigration Department to “weed bad elements in society.”

Commenting on President Jammeh’s hate speech at the UN, Edwin Sesange, coordinator of the protest and of the African LGBTI Out & Proud Diamond Group, said:

“Yahya Jammeh is the ‘President of Homophobia’. He is the big danger to Gambian LGBTI people.   “We are protesting to show our disapproval of his remarks and to also show our support for LGBTI people in The Gambia.   “It is deplorable that such vile homophobic language has been used at the UN.   “His remarks are a menace to the human rights of LGBTI Gambians and give a green light to violence by anti-gay vigilantes.   “The UN platform in New York should not be used to deliver messages of hate that put the lives of the innocent LGBTI people in danger.   “It is unfortunate that President Obama, Prime Minister David Cameroon and the UN Secretary General have not condemned this homophobic bigotry,” noted Sesange.

PHOTOS of the protest: http://bit.ly/1foKuXR