Boehner buries ENDA, where is the Executive Order Obama?

After the Employment Non-Discrimination Act (ENDA) passed the Senate with bi-partisan support, all eyes turned to the House. It seems when we looked there, the Bill had been buried in four different committees and House Speaker John Boehner (R-OH) was busy speaking out against the need for ENDA saying:

“But I think this legislation that I’ve dealt with as chairman of the Educational Workforce Committee long before I was back into leadership, is unnecessary and would provide a basis for frivolous lawsuits.”

Boehner’s claim is despite the General Accounting Office (GAO) finding that in the states with existing employment protections there was only a very small fraction of employment discrimination complaints based on sexual orientation and gender identity. Doesn’t seem that the state laws have in reality provided “a basis for frivolous lawsuits.” So why would a federal law?

Just to see how entrenched Boehner and the Committees are, over a 26 hour period yesterday and today we went to find where ENDA had been buried and we could not find it.

At a subcommittee of the Oversight and Government Reform Committee we were ignored.

At the Committee on Education and the Workforce’s Subcommittee on Workforce Protections we commend Representative Joe Courtney (D-CT) for actually engaging with us to say he is a co-sponsor of ENDA who would like to see the Bill come to the floor. Unfortunately, he advised us to go talk to Speaker Boehner’s office. Been there, tried that…

At the Judiciary Committee after waiting for enough Republicans like Darryl Issa (R-CA) and the Committee Chair to arrive, we called out “Is ENDA here?” while holding up the sign reading the same. Representative Mel Watts (D-NC) did notice, but we were mostly ignored. As we were removed from the hearing room, we continued to call out “Where is ENDA? This is one of the four committees it was sent to!”

At the Committee on House Administration we were once again ignored. We were holding the “Where is ENDA?” sign well enough, though, to get it into the livestream broadcast. 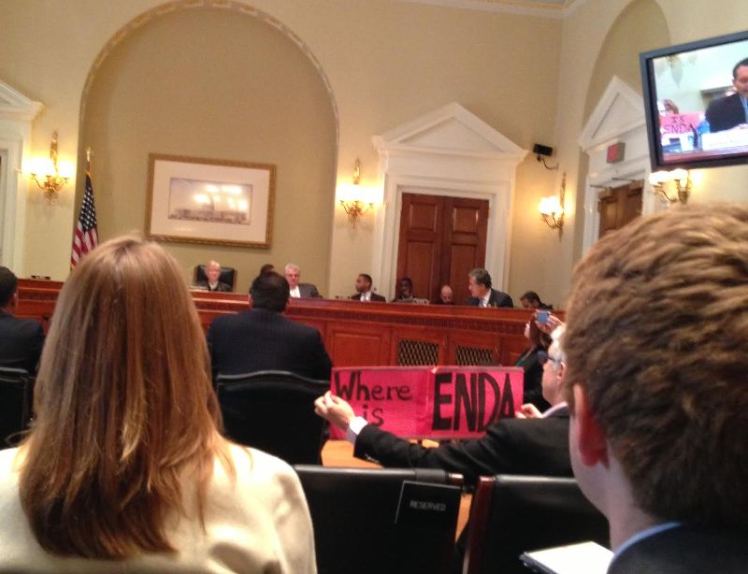 And still no one even acknowledged us or our sign so we held it up high and walked on out.

The result of our search for ENDA was being engaged at one committee, being man-handled at another, and being ignored at two.

The takeaway from the House committee visits is that no one seems to care or have an answer except to send us to Speaker Boehner who has spoken out against the bill.

President Obama promised back on his first campaign trail to pass an executive order protecting some 22 million federal contractor employees. Once in office, he reneged saying he felt ENDA was the better legislative answer for all.

Now that the Senate has acted on ENDA and House Speaker Boehner has declared he will not – it is your turn Mr. President. Maybe you can find the Bill we could not.

Stay tuned tomorrow for a #BlockParty in Washington D.C. bringing together all of the progressive movements John Boehner has blocked legislation for in the last 3 years. Including not only ending LGBT employment discrimination but also the efforts to reform our immigration system, raise the minimum wage, secure women’s choices about health and reproductive care, defend our environment from corporate destruction, enact sensible gun control policies, curb abuses of the student loan industry, and reduce barriers to voter participation.

Date/Time: Thursday, Nov 21, at 9am ET
Location: Upper Senate Park, at the corner of Constitution Ave NE & Delaware Ave NE (on the north side of the Capitol building)

5 thoughts on “APB put out on ENDA”