A South African man has received a 22-year sentence for the ‘corrective’ rape of a lesbian.  Andile Ngcoza, a man with a long history of violent crime, raped Millicent Gaika from Gugulethu to “show her she was a woman” by impregnating her.

OBLOGDEE reported extensively (see links below) on the Millicent Gaika case as well as the manhunt for Ngcoza after he disappeared following release on unwarranted low bail.

Gaika has suffered severe emotional trauma as a result of the rape including an unsuccessful suicide attempt last year.

Corrective rape of lesbians is an epidemic in South Africa as OBLOGDEE, along with many news outlets, have reported. The perpetrators are seldom found or held responsible so this conviction and sentence is welcome justice. 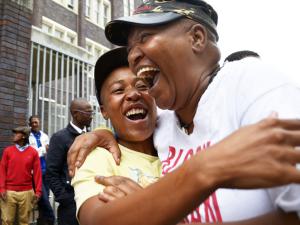 Funeka Soldaat, chairperson of Free Gender the lesbian advocacy group supporting Gaika, said the sentence would serve as a warning that “you can’t just mess with people’s lives and think you can get away with it”.

Read more about the conviction here.