Songs and prayers in all religious congregations all over South Africa |

“As we celebrate the life of Nelson Mandela, its become the central task that we reflect on what needs to be done to sustain his legacy to ensure we do not betray what he and other sacrificed for and stood for” former President Thabo Mbeki

Johannesburg, South Africa- Upon the passing of former President Nelson Mandela, current South African President Jacob Zuma called for all religions in South Africa, to hold memorial services, today, Sunday December 08, 2013. The Johannesburg Jewish Community, under the guidance of Chief Rabbi Dr. Warren Goldstein, held an official Jewish Community Prayer and Memorial Service at Oxford Synagogue, in Riviera, mere miles from the home where Madiba passed away peacefully on Thursday night December 05, 2013 at 8.50 PM. It was there that former President Thabo Mbeki spoke for the first time since the death of Madiba, making the statement calling for South Africans to honor the legacy of Nelson Mandela through future actions in terms of the continued progress in accordance with the principles of South Africa’s Constitution.

For me it was an extremely moving memorial, of great significance. This was the very synagogue of my youth, where on many occasions our Rabbi, Norman Bernard, preached against the ills of Apartheid, from the very pulpit which now served as the platform for reflection on the life of Tata Madiba, Nelson Mandela, who upon release from unconscionable persecution, ensured that ‘Never, never and never again would any one group suffer oppression in this beautiful land, South Africa.’ The Jewish community turned up in the thousands to honor and pray for the man who is credited for preventing a bloodbath and ensuring freedoms and liberty for all.

The congregants stood up and loudly applauded their appreciation as former President Thabo Mbeki entered the sanctuary and wearing a yamulka, he joined the Chief Rabbi in the front row, where we were led in a Mincha,  Ma’ariv service, the mourner’s kaddish, a memorial prayer and speeches by President Mbeki, the Chief Rabbi, Zev Krengel, President of the South African Board of jewish Deputies (SABJBD, and Israel’s Ambassador Arthur Lenk, who read a letter of condolence and tribute from Israel’s President Shimon Peres. 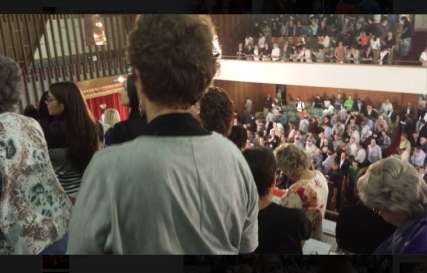 President Mbeki’s speech was resolute and reflected on what South Africans could do in the times ahead. I transcribed portions of it as best I could:-

“So Chief Rabbi I think it is necessary that we must reflect on the future. That is the most important part of the celebration of his life. The constitution is the most important starting point…  Speaking of the future. We must ask ourselves the question … look very closely at the question, as to what we do about his legacy. What are we doing with regard to the goals which are contained the Constitution. How far are we in terms of democracy and a non-racial SA?  How far are we with regard to sexism and poverty? How loyal are we to the values that Nelson Mandela represented? And not only in terms of what we ‘say’ but also in what we do. Do his values continue to inspire the values in which we act to continue to develop the better South Africa?

As we celebrate the life of Nelson Mandela, it’s become the central task that we reflect on what needs to be done to sustain his legacy to ensure we do not betray what he and other sacrificed for and stood for. And it is our hope that we as a country can and should do it out of that dialogue, then as a country together we would be able to say not only we have a common vision as represented in the Constitution, but we also have a common road-map as to what we still need to do.”

Mbeki mentioned all other leaders of the struggle…and reiterated that we as South Africans ensure we do not betray this noble legacy which they all left behind.

The Chief Rabbi’s speech was particularly moving. Rabbi Goldstein mentioned the week’s Torah portion, and drew an analogy to the story of Joseph and how despite being betrayed by his brothers found it in his heart to forgive and pursue reconciliation, rather than revenge. A great coincidence that Madiba should depart at this time in the reading of the Jewish torah.  As we know Madiba indeed exemplified just that. And the very well being of all Jews who may otherwise have been in peril had it not been for Madiba’s peaceful impact when SA trabnsitioned to democracy. We as Jews came to South Africa as victims of oppression and persecution and Madiba’s reconciliation ensured our equal citizenry in South Africa, a home provided to us after pogroms in Eastern Europe and other persecutions against is Jews around the world at different times in history:

The Chief Rabbi noted our deep gratitude to Madiba for the freedoms we enjoy.

“The ethos of South Africa is that we can be who we are. These are the blessings we do not take for granted.”

The Rabbi also expressed his gratitude to former President Mbeki for choosing to spend his first public expression of grief with SA’s Jewish community.

The most moving for me was the singing, which I was fortunate to video, of the Israeli Anthem with N’Kosi Sikelel’, the South African National Anthem, both sung so soon after recital of the Jewish mourner’s kaddish.

We are now preparing in South Africa for over 70 sitting heads of States and 10 former heads of states. Journalists are pouring in for the funeral service which will be held tomorrow, Tuesday at FNB stadium with  many overflow stadiums providing space for the hundreds of thousands of people who are converging on the City. Madiba’s body will be held in State from Wednesday through Friday and it will travel the roads of Pretoria from the hospital to the Government Building each morning.  After that time Madiba’s body be flown to Umtata airport in the Eastern Cape and then he will be buried in his birth and home village of Qunu. 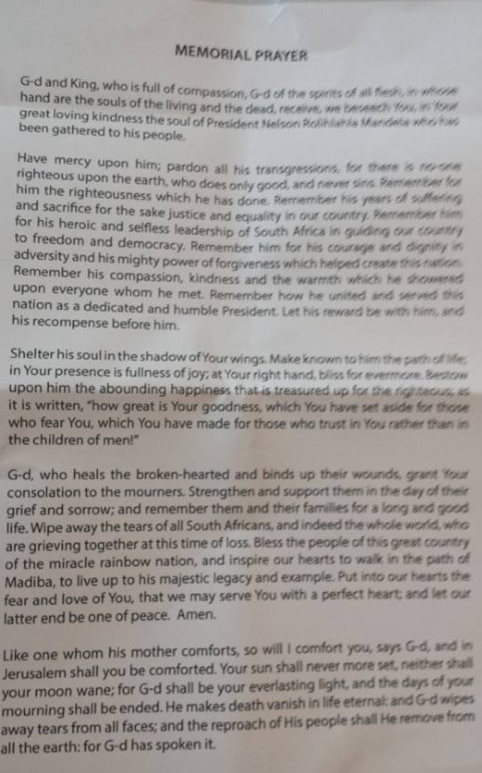 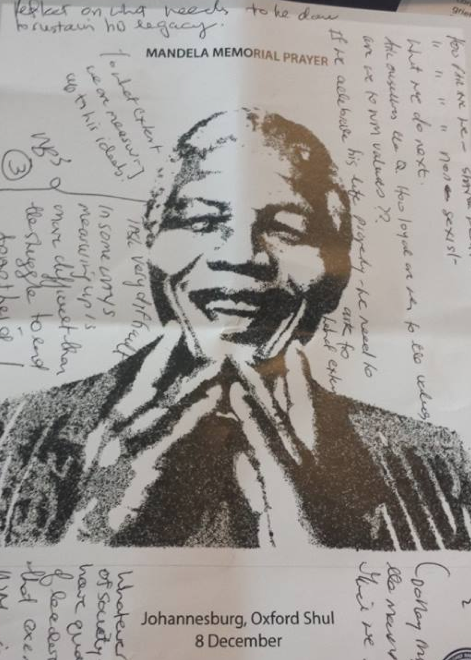