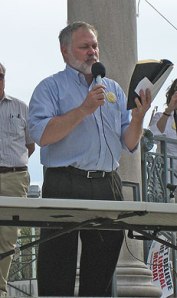 Scott Lively (I-MA) would like to remind everyone that he is still running for Governor of Massachusetts. We presume that his campaign has been suspended while he fights Crimes Against Humanity charges. That pesky trial for persecution on the basis of sexual orientation and gender identity he just lost a bid to suspend early last week. Regardless, his gubernatorial campaign is now officially launched.

Lively first hinted at this run back in November 2012 then claiming to be debating whether to run as a Democrat or Republican. In September of this year he declared his decision to run as Independent. He used last night’s interview with MassLive to called MA Democrats “Communists” so I guess they were not going to be his party of choice. He has in the past called MA Republicans RINOs, as many others do, but perhaps he saw perennial Republican candidate Charlie Baker as formidable (MA inside joke, sorry.)

In an earlier press release, Lively had seemingly called both the Ds and Rs, including Mitt Romney, “socialists” saying he was “exactly what Massachusetts needs to recover from four decades of decline under Godless socialism.”

So, Democrats = Communists, MA Governors = Socialists, and CCR = Marxists. Oh, and of course the queer community = Homofascists as well as Anarchists. An “ist” label for everyone, huh Scott.

It is humorous now that Martha Coakley (D-MA), the present District Attorney of famed failed run for Senate that gave us Scott Brown (R-MA), is one of the “Communists” Lively is running against. She should already know her opponent well given the Sexual Minorities Uganda (SMUG) lawsuit brought by The Center for Constitutional Rights (CCR) is occurring in Massachusetts Federal Court.

As far as his motto “Qualified. Experienced. Electable.” goes if you are looking for someone charged with experience crafting laws to exterminate minorities you may happen to hate then Scott Lively is surely both qualified and experienced. I’m just not so sure that is what it takes to be electable here in what he calls the “bluest of the blue states” thankfully.

There is no website  for his campaign, but supposedly a Facebook page at SL4G2014. Given that it has 5 ‘Likes’ I have to wonder that it isn’t just someone’s idea of a joke.

A “humorist” or “satirist” perhaps…