You are here: Home » Video Showdown as Lawmakers in Uganda Accuse Journalists of Unprofessional Conduct 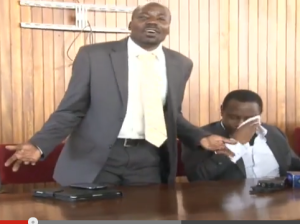 After passage in the Ugandan Parliament of the Anti-Homosexuality Bill last week, two Ugandan lawmakers, highly critical of the bill, engaged in a fiery exchange with journalists at Parliament who turned up to cover a news conference. Two MPs, Hon. Sam Otada Amooti of Kibanda and Hon. Fox Odoi of West Budama North refused to take questions from journalists saying the conduct of the journalists was unprofessional.

The Uganda gay community is also appealing to the International Criminal Court to challenge what they say is a radical piece of legislation.

The Ugandan LGBT community held its own Press Conference which we reported here at:

Further to the role of Ugandan Media, some did not shy away from social media:

An impartial Ugandan parliamentary journalist asked this question on Facebook. Please note that most Ugandan Political correspondents and journalists do not use words we in the West consider politically correct to describe gays. Here was the post:

And below are the responses, including some not so partial journalists – even one stating that he could not bring himself to write about the issue because of his prejudice against gays.

To be quite honest I am usually much more polite than I was able to be here. I tried but my buttons may have been overly pushed.  Sometimes fighting fire with fire works. However in my many years of tackling the opposition on this issue, including the ultimate haters David Bahati and Scott Lively, I have come to realize that entrenched lies embedded in the hearts through hate, have created so much fear, changing these hearts are as impossible as  (to borrow the sordid phrase) ” F’ing for virginity.”