“We are not doing this to get on TV or be famous.  It is time for the Church to change its attitude.  We are going to stick around, no matter what.” 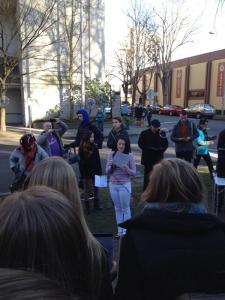 At the second consecutive Saturday protest outside the Archdiocese of Seattle this afternoon, the students of Eastside Catholic announced they are taking their protest to a new level. They are now thinking bigger planning to organize, nationwide, a  “Z-Day” on Jan. 31 to protest the forced resignation of their vice principal Mark Zmuda. OBLOGDEE reported on the same-gender marriage inspired firing heartlessly a day before the Christmas holiday here.

Since the termination announcement and resulting protests by Eastside Catholic and other area schools , Mr. Zmuda has denied the Eastside’s claim that he resigned voluntarily.

“To set the record straight, I was terminated. When I was told, I asked why I was being terminated and they said because I violated Catholic teaching. I asked if it was breach of contract, they said no. I said if it had anything to do with my job performance or evaluations and they also said no.”

The following was read in a statement by students at today’s demonstration:

“We encourage students, at Catholic schools or otherwise, as well as any other impassioned individuals, to proudly wear the color orange on that day. In so doing, we will be showing solidarity with Mark Zmuda, as well as expressing our hopes for an enlightened perspective on issues of sexuality in the Catholic Church.”

“We firmly believe that the decision to marry, or not marry, should never preclude any otherwise qualified individual from working at the school. When Pope Francis opines that the Church is big enough for homosexuals, one would hope Catholic institutions begin to reflect those sentiments.”

“The Gospel compels us to demonstrate compassion and love in all our actions, and Mark Zmuda has always done just that.”

You gotta love high school students who fight bigotry with the gospel those practicing the bigotry taught them!

The students also challenged their school’s administrators and the Archdiocese with following demands:

– “We expect a transparent and HONEST statement that accurately addresses how this decision (removing Zmuda) was reached, what players were involved, and their rationale for doing so in light of Catholic social teachings. The students, alumni and community members deserve an apology for the opaque and misleading fashion in which this difficult situation was handled.”

– “In future matters, we ask that the Archdiocese, or any Catholic school under its purview, conducts itself accordingly — that the review of ANY employee judged to have broken Catholic doctrinal teachings (birth control, cohabitation, matters of sexuality) will henceforth include a holistic review of the individual’s job performance, character and embodiment of Catholic social teachings before a final decision regarding employment standing is made.”

– “No school, in conjunction with the Archdiocese or acting upon its own accord, will ever again make any similar decision based strictly on doctrinal matters, as the draconian enforcement of a set of oft-ignored dogmatic mores is no longer relevant to the 21st Century Church.”