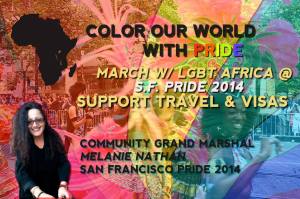 PALM SPRINGS, CA – When I heard that Cher and Cyndi Lauper would be performing at a concert in Los Angeles on my birthday I was so excited.  My partner and I will be celebrating our first-year anniversary three days later. What better way to spend a few special days than to get away to see two of the biggest gay icons? So when my boyfriend hinted that we could go if I wanted to do that for my birthday I jumped at the chance. After all, this could be the last time she’ll do a tour.

A couple of days ago I was going through my news feed and noticed a post from Melanie Nathan. She had been selected as a Community Grand Marshall for San Francisco Pride Parade and she was putting together a contingent of up to 100 people, hoping to get some people from Africa to come and join her contingent in San Francisco. I had been following her work for a while and I really resonate with her efforts. I knew she had raised a lot of money for LGBT asylum seekers in Africa and Uganda in particular. That was much more than what a lot of people were doing.

Due to the nature of my own activism as Technical Coordinator with Uganda Gay on Move and various other organizations I’ve received sometimes-daily messages from people desperately seeking the means to just survive. I wondered what more can I do? I am a member of an organization that is based abroad. But when I receive requests from people personally where do I send them? The organization I represent can only help them if they can get to the Netherlands. What do they do until then? Melanie has always had an open door as a contact that I can share with people who need help.

I decided to muster up a little courage. I messaged Melanie and asked her if I could march with her representing Uganda Gay on Move as the Netherlands’ largest African LGBT rights organization. Scott Lively is getting this year’s Pride Pink Brick award for promoting anti-gay hate abroad, including in Uganda, and the theme of Pride this year is, “Color our World with Pride”.  Maybe Cher tickets were great and all but this… THIS would be a really special way to spend my birthday and our anniversary.  Much to my delight we’re booking the plane tickets soon.  Looks like I’ll be joining my fellow activists in San Francisco at the end of the month and it can’t get here soon enough! 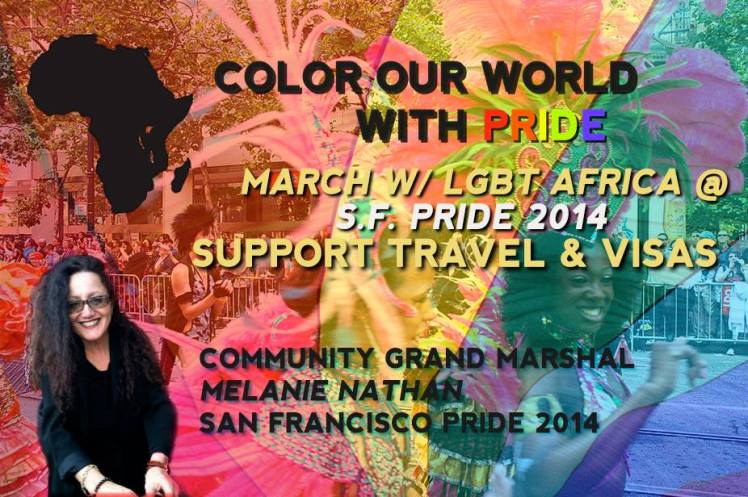 More about this pride contingent: