SMUG v. Lively is a federal U.S.A. lawsuit , brought by The Center for Constitutional Rights under The Alien Tort Statute, on behalf of a non-profit umbrella organization for LGBTI advocacy groups in Uganda against Scott Lively, a U.S.-based anti-gay extremist, for his role in the persecution of LGBTI people in Uganda, in particular his active participation in the conspiracy to strip away their fundamental rights. 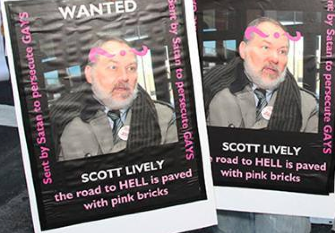 Lively was recently deposed in the case. Here is what he has to say about it:

I’m not going to go into details but if I had to choose only one phrase to describe the SMUG attorneys’ efforts in their two days of grilling me under oath at their luxury Manhattan offices it would be “grasping at straws.” The veteran “hired gun” trial attorney they brought in from Boston to interrogate me was clearly frustrated that the SMUG legal team was expecting him to “make bricks without straw” as it were, since the very documents they gave him to question me about contained my rebuttals to their accusations.

For example, they voluntarily entered into evidence my Letter to the Uganda Parliament and Reply that proves beyond a shadow of a doubt that I vigorously opposed the extremely harsh Ugandan Anti-homosexuality Bill which SMUG insists I masterminded — the essential premise of their lawsuit.

And on the second day they played into the record the entire 42 minutes of my April 2012 interview with Roadkill Radio in which I exposed in detail the utter dishonesty of the SMUG lawsuit. It is unfathomable to me that anyone, let alone trained attorneys, could think this radio show helps their case.

The whole deposition was like that: his skillful (but to me transparent) attempts to get me to agree with his deliberate mischaracterizations of my words and actions, defeated by my reference to clear explanatory statements in the same documents that show what I actually said and did.

Though I was glad the truth was getting on the record, I actually felt a little sorry for him. To make matters worse for him, whenever we went on the record and he started grilling me, a huge jack-hammer type piece of heavy equipment — big as a bulldozer — started up in the construction project across the street where (for the whole two day period) a crew was breaking up a gigantic two-foot thick slab of concrete. He commented frequently about how irritating it was to him, though it didn’t bother me at all.

The whole jack-hammer thing seemed like an obvious metaphor for the steady and relentless chipping away of their frivolous lawsuit by the hammer of truth. It also seemed quite obviously to be directed by the hand of the Lord in answer to all the prayers that were going up for me and my attorneys by hundreds of people around the world. By the way, our Liberty Counsel team led by Harry Mihet served its role at the highest level of professionalism.

I want to thank everyone who prayed for us, and to give all glory to God for what I believe was a great victory for truth in this latest in a long string of legal skirmishes. The case will likely continue, since I don’t believe the Center for Constitutional Rights (whose attorneys are the people driving the lawsuit and milking it as a lucrative fundraising cash-cow) has the integrity to dismiss it on their own initiative. But God is still in charge and I ask you to join me in continuing to pray that His will, not my will be done, whatever that may be.

I’ll keep you posted as events continue to unfold.

This is the first ATS case seeking accountability for persecution on the basis of sexual orientation and gender identity as a crime against humanity. The United States Supreme Court has affirmed the use of the ATS as a remedy for serious violations of international law that are widely accepted and clearly defined. Persecution is defined in international law as the “intentional and severe deprivation of fundamental rights contrary to international law by reason of the identity of the group or collectivity.” Lively – a U.S.-based attorney, author, and self-described world-leading expert on the “gay movement” – has traveled to Uganda and other countries, including Russia, and played a key role in the effort to strip LGBTI people of fundamental rights, including the rights to free expression, association, and assembly.

A reminder to people – although suit is refers to “Crimes Against Humanity,” this is a civil lawsuit.