I wonder if the Network for Good, realizes that they have in essence partnered with an organization which uses a convicted terrorist to promote donations through its service? Probably not!  Network for Good is an online fundraising platform for charities and non-profit organizations. The company was founded in 2001 by America Online, Cisco Systems and Yahoo and has processed over $1 billion in donations since inception, charging between 3% to 5% transaction processing fee for donations.

Its seems that Rasmea Odeh (Rasmieh, Rasmeah) still works for and is associated with The Arab American Action Network (AAAN), despite her immigration fraud conviction and despite the fact that she is now well known as the woman convicted of murdering two young men and injuring 8 others in a Jerusalem terror bombing.  Not only is she named as being on staff of AAAN, but she also has penned a fund raising letter, which resides on the website, naming her “Associate Director” of AAAN,  dated  mere months ago, December 18, 2o15.

Odeh was sentenced to life in prison in Israel,  for the terrorist bombing in 1969, which killed Leon Kanner, 20 and Edward Joffe, 21, and injured 8 others. She served only 10 years, of her life sentence, due to a prisoner swap.  She came to the U.S.A. 20 years ago and has been recently convicted in the U.S. Courts for immigration fraud. She was sentenced to 18 months in prison and then a deportation to Jordon.

Her case, has just been sent back to the U.S. District Court to see if evidence of PTSD will be admitted into a new trial or if the case will go back on appeal. She was convicted for lying on her immigration form, where she attested to never being convicted of a crime, despite her conviction and life sentence in Israel.  Her contention is that PTSD caused her to fail to state the truth about her conviction on her United States Immigration form. The families of her victims have expressed their outrage.

Here is Odeh pleading for donations to the Arab American Action Network, essentially in her name. She is cited as AAAN ‘s Associate Director: (Screenshot Feb 28, 2016.) LINK:

The AAAN is your organization, and has been for close to 20 years.  I have been here for 10 of those years,……”

AAAN has had a very busy year and continues to expand its work. Please consider making a tax deductible donation before the end of 2015, and help YOUR organization make a difference in the lives of thousands of Arab immigrants and Arab Americans in Chicagoland.

Merry Christmas to those who celebrate, and I wish you all a happy and healthy New Year!

During the time of writing this letter on the AAAN website, pleading for donations through Network for Good, (Dec 18, 2015,) Rasmea Odeh stood convicted for immigration fraud in the U.S.A. and was on bail pending her appeal. 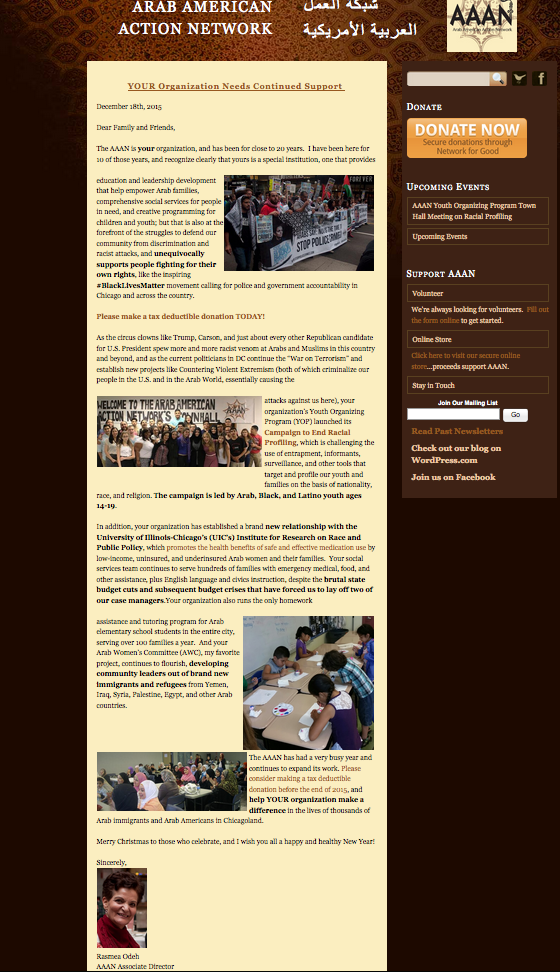 This link goes to the Network for Good fund raising services website.

What I find most insidious about this letter by Odeh and its content is that it has been designed to prop up her case in the ‘Court of Public Opinion.’  She brings in Black Lives Matter and racial injustice, in essence, to cover the truth and support her own cause. Establishing herself as a “profound leader” on these issues has brought her supporters, has helped her gain sympathy, and is now designed to mitigate the lies and fraud charges for which she was found guilty – and worse yet, to rewrite her legacy. Unfortunately many have fallen for the ploy! She is still a convicted terrorist murderer.

This letter, coming from the pen of convicted terrorist Rasmeah Odeh, can be viewed, in essence, as a front against what Odeh truly represents, and for the new legacy and the history re-write which she is seeking accomplish.  Its easier, I guess, to be accepted as a terrorist, if one is seen to be doing community and charity work, and if one exploits the vulnerabilities of intersecting communities.  The claiming of victim-hood by a terrorist will indeed require her to identify and find commonality. This she has done in a masterful fashion.  Lest we forget that she was the mastermind in a complex terrorist exercise. Orchestrating and executing her crime was  no easy task . She continues to prove she is adept!

Becoming a hero in a community where one asserts common ground, has served to prop up her lies and muster up misguided supporters, many of whom cite her “community work” as somehow being more important than her acknowledging the truth of her past or at leas showing some form of  remorse toward her victims and their families. However she is now using this organization, its website and all associated with it as her platform as a prop in her revision of history.

Odeh leads anti- Israel rallies and protests drumming up more supporters, who have also taken to protesting on her behalf against her fraud conviction – asserting she deserves freedom, through believing her ongoing lies and contradictions.  At the helm of this support is Hamet Abudayyeh, the executive director of  AAAN,whose home was raided in 2010 by the FBI, investigating links to terrorism, and who continues to lead her cause for freedom and citizenship in America.  Recently Abudayyeh participated in the Creating Change 2016 Anti-Israel protest, where Jewish LGBT conference attendees were subjected to an antisemitic onslaught, where protesters chanted for Israel and Jews to be driven into the sea.

When all is said and done – Rasmeah Odeh is a convicted terrorist – who did not serve her time. She is now raising money to promote AAAN, citing worthy causes, however exploiting them to prop up her lies  and serve her personal quest to create public support, to refute the immigration fraud conviction and remain in the U.S.A.   She is trying to use the U.S. court to demonize Israel and as a platform to in essence decry her terror conviction through false accusations that serves her current situation.  All the while she continues to promote anti-Israel causes in America, while exploiting the immigration system and defecating on the memories of the victims of her murderous bombing. I wonder if Network for Good feels good about this?

Here is the Arab American Activist Network’s notice of its partnership with for Network for Good – the direct connect to ODEH’s letter plea – where as Associate Director of the organization she is reaching out for donations at the time when convicted of immigration fraud: 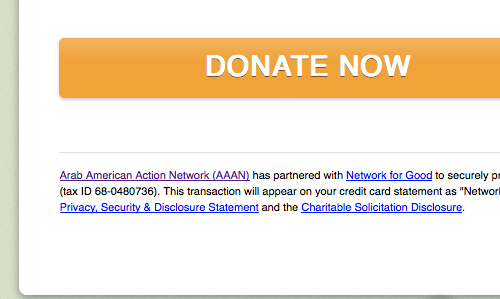 Adding insult to injury it seems that the Associate Director, Odeh,  who has been convicted of Immigration fraud,  in fact is the associate director of an organization that provides citizen related services/ guidance: