Yesterday, Fred Karger launched his issues campaign.  It was my pleasure to write an article for the Advocate that posted at the moment of Karger’s launch. While still a staunch Democrat and supporter of President Obama, I believe that I am still obligated to provide Fred Karger, the first ever gay candidate for President, with my support during this primary period.

Now this might not sound typically Republican, – as a moderate independent Republican Karger has the fortitude to show America that Republicans can be gay too and to show gays that gays can be Republicans too:-

Fred Karger says: “Every American deserves the right to work in an environment free from discrimination.  As President I would immediately work to pass the Employment Non Discrimination Act (ENDA), which would help every American feel safe and secure in his or her job, regardless of sex, age, race, religion, sexual orientation or gender identity.”

And the rest of it:-

There are 3.1 million jobs available in the United States. We must begin to immediately fill these jobs.

We need to stop the bleeding of American jobs to countries like China and India.

Entrepreneurs are the essence of the American Spirit and the source of a majority of all new jobs in this country. We need to invest far more into developing entrepreneurs.

The President has the power of the Bully Pulpit and can work with business and consumers to promote American made goods.

We need to dramatically rethink unemployment benefits to get the long term unemployed working again.

American ingenuity has made America the envy of the world.

Every American deserves the right to work in an environment free from discrimination. As President I would immediately work to pass the Employment Non Discrimination Act (ENDA), which would help every American feel safe and secure in his or her job, regardless of sex, age, race, religion, sexual orientation or gender identity.

VIA FRED KARGER PRESS RELEASE-
Please read this wonderful column by Melanie Nathan where she said this about the commercial, “Again in green-screened debate and spoofy consistency, Karger charges in like a knight to rescue the sullied elite at the very moment the hetero normative Romney-Cain-Perry-Gingrich clan stumble, unable even to offer canned pitches — and through editing brilliance of Lapniski, Karger pulls off a real jobs advertisement.”

Op-ed: Fred Karger Gets Serious About Jobs in New Ad

For full story, CLICK HERE.
With the launch of a commercial addressing voters’ top priority, Melanie Nathan makes the case for why LGBT people should back Republican Fred Karger in the New Hampshire primary.

When Fred Karger announced last year that he was running as the first openly gay candidate for the Republican presidential nomination, the decision seemed odd to many of us in the LGBT community. Now that almost a year has passed, Karger’s bid is more purposeful and a phenomenon that ought to be embraced by our community. (MORE…)

New York and Chicago Fundraisers Set –SAVE THE DATES!!! 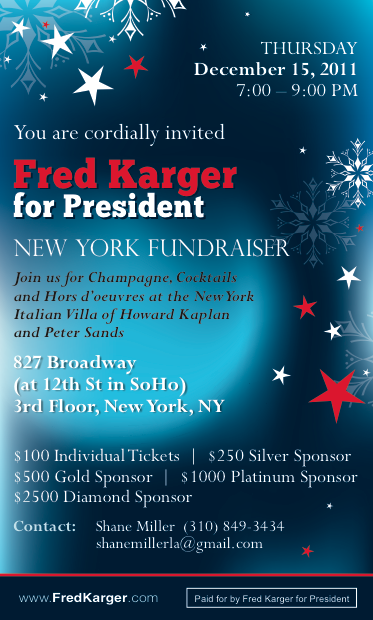 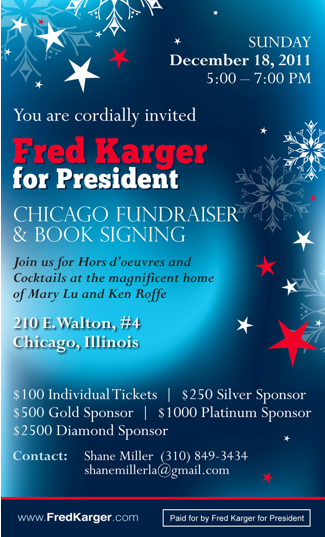 Fred in the News

Here are three great stories that came out this week: