You are here: Home » Russian Prime Minister Vladimir Putin to be Quizzed Over anti-gay laws. 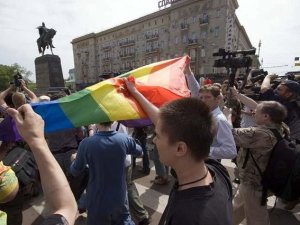 The High Representative of the European Union for Foreign Affairs Catherine Ashton, told activists today that she would raise the discriminatory laws at the EU-Russia summit.  She received in Brussels a 246,000 petition along with the Presidents of the European Parliament’s Intergroup on LGBT rights, Michael Cashman and Ulrike Lunacek.

Two Russian regions have passed a law which eliminates the freedom of LGBT people to speak publicly and assemble. The same ‘anti-propaganda’ law is being considered in St Petersberg and reportedly under consideration federally.

In each instance the laws are being pushed by members of Putin’s United Russia party. Putin’s Deputy Prime Minister has said that lawmakers should consider the bill at the federal level.

“If this law is adopted, it would legalize discrimination against gays and lesbians in Russia. All totalitarian regimes in Europe began with similar repressions of the LGBT community. By supporting our struggle against this bill, Europe helps to prevent Russia from sliding into a new totalitarianism”

A small, brave group of Russian activists tested one of the existing laws, in the far-North Russian city of Arkhangelsk on the day it came into force.

Four activists – Anno Komarov, Alexey Kiselev, Nikolai Alekseev and Kiril Nepomnyaschiy – carried posters in front of public buildings which read: “Trans men can be gay. Sexual education to schools”, “Homosexuality is a healthy form of sexuality. This should be known by both children and adults” and, “In this library children are reading books written by gays. Homosexuality is normal.”

The City Hall has already used the law to ban a larger public action applied for by the activists but local police did not arrest the activists 12 December as one-person pickets do not require a permit.

In front of the City Hall Nikolai Alekseev stood with a poster saying: “Children have a right to know that great people too, are gay. Homosexuality is natural and normal. Tchaikovsky, Nureyev and others are names of great stories of gay people in Russia”.

Alekseev, GayRussia’s Founder, said that they would take the Arkhangelsk ban to court:

“Either the Court will say that the law did not permit to ban our events because it is not obvious to assess in advance the presence of minors in the public place, or it will simply uphold the ban and we will go to challenge it to the Constitutional Court and the European Court of Human Rights.”

“We will win either in Russia or in Strasbourg and this law will be defeated in both ways” said Alekseev.

In 2009, GayRussia activists logged a case with the European Court of Human Rights on a similar bill implemented in 2006 in the Ryazan region. The United Nations Human Rights Committee recently said that they will consider the laws next July.

8 Comments on “Russian Prime Minister Vladimir Putin to be Quizzed Over anti-gay laws.”