You are here: Home » Ghana Minister of Education to Eradicate Homosexuality Through Education

Ghana Minister of Education to Eradicate Homosexuality Through Education 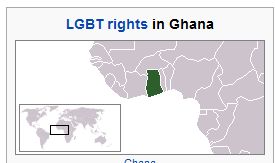 I read an Article in an African internet publication known as the The MAIL – written by BELINDA ENYONAM HENYA (Cut and pasted) and noted the seriousness of what could either be a case of misreporting, muddled message or pure ignorance and perhaps all of the above!

This is how the Post Reads in The MAIL

GHANA’s Ministry of Education’s Public Relations Officer, Paul Krampah has said that the Ministry’s HIV/AIDS Secretariat has trained teachers to educate students about the “adverse consequences” of homosexuality including HIV/AIDS and other sexually transmitted diseases.

According to the Domestic Violence and Victim Support Unit (DOVSSU) of the Ghana Police Service, more teenage boys in Junior High and Senior High Schools are becoming victims of sexual abuse. Many of these young boys and their families, according to report are reluctant to report such cases to the police and have serious implications for the health of the boys.

As a means to check the spread of HIV/AIDS in children, there have been calls on the governments to make Sex and Relationships Education (SRE) compulsory within the national curriculum.

According to campaigners, putting SRE at the heart of the curriculum would help ensure young people are equipped with the knowledge and confidence to protect them from HIV/AIDS.  Mr. Krampah said it was in this regard the HIV/AIDS secretariat was established.

“We are very optimistic that things will change and the incidence of homosexuality in the country will be a thing of the past,” he said. Statistics he said show that HIV/AIDS have affected young men more than women and most especially in the UK and USA.

“It sounds to me like Ghana’s Ministry of Education’s Public Relations Officer, Paul Krampah, is basically saying that once students are made aware of the risk of HIV infection, they will not ‘choose’ to be homosexuals, and so homosexuality will be a thing of the past in Ghana.  This completely ignores the accumulated scientific observations that have led us to the proposition that same-sex behavior and same-sex bonding has been found in practically every species on earth, including humanity, without harming society in any way. Also, using neuro-imaging, scientists have discovered there is a considerable difference in the brain structure of hetero and homosexual men. Homosexuality is a perfectly normal and natural sexual orientation, and homosexuals have all the human rights that you or anybody else has.   Gay rights are human rights.  Be on the right side of history.”

While the commentator may have corrected an aspect of the misconception, at least for those of us who are willing to note that it is sensible to portray this picture accurately, we are unfortunately dealing with AFRICA at a time when scape-goating homosexuals and the entire LGBTI community is simply par for the course!

If in fact this is the message in Ghana, I am afraid we have the equivalent of the Titanic hitting the iceberg!  The ship is going down and it is going down fast and furious.

What I read here is beyond a mere desire to instill fear into youngsters about homosexual sex; I read an analogy between pedophilia and homosexuality, I read that all HIV/AIDS is the fault of homosexuals, and I read that abstinence for homosexuals is an imperative, and much more…. and worse yet I see the result of such so called education.

Note the Ministers opinion that his educational stance will eradicate homosexuality. Homosexuality will never be eradicated, because as a new child is born, each is subject to an orientation which could well be that of same-sex attraction.   However the sinister implication is clear.  Minister Krampah wants all homosexuals dead! Plain and simple.

After all homosexuality is illegal in Ghana and many men are in prison as a result of this. Recently South Africa granted asylum to a man from Ghana based on his sexuality and many more have fled that country abroad.

It would seem prudent to me if the Ghanan Minister did not have this hidden agenda to ‘kill off homosexuals,’ and if this were truly about saving his people, then surely he would be educating all HIV/AIDS risk factors to his students, without asserting blame. Surely such blame will only serve to minimize awareness rather than maximize it, for example when parties engage in different gender sex.

I think we can read well into this as yet another piece in the building frame of genocidal propaganda being taught to Africans, continent wide.   It is nothing more nor anything less.

Clearly Minister Paul Krampah is trying to find a mechanism to steer his people from the solid warnings of  the  U.K. around retracting AID to countries which support criminalization of homosexuality and last week’s clear statement by Secretary Clinton that homosexuality is indeed a human right.

I imagine the Minister’s comments are well timed – in an endeavor to assert the blame for HIV/AIDS squarely on homosexuals…. and then the message –  ‘by the way if we get rid of homosexuality (the ACT – implying the person behind the ACT) – then we will certainly be rid of HIV/AIDS.

← My Thanksgiving Week From Heritage Foundation to Holocaust Museum
What is Kofi Annan Doing About LGBTI Human Rights In Africa? →