You are here: Home » Rev. Says Son Stabbed and Torched Because Gay

No one could imagine the pain of losing a child, the victim of  a brutal murder, but worse yet being  murdered for how God made him.
By Melanie Nathan, June 06, 2012. 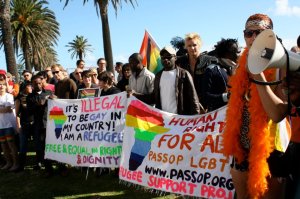 A  most heinous hate crime –  the story of a father and a son – the son who confided in his loving father, a reverend from a Church in South Africa.

A Cape Town Reverend, Casper Edward Daniels, says his son was stabbed, and his private parts burnt, then set alight in a brutal rampage of hate and murder.

According to the Daily Voice the mutilated, smouldering body of Neil Daniels, 36, was discovered on Monday night by a neighborhood watch member in a reed-filled area in Milnerton, near Cape Town in an area known as ‘The Vlei.’

Neil Daniels had not been out about his sexual orientation, even though he had confided in his father, who is from the Christelike Evangelie Sending Church of South Africa.

“I think the reason why they killed my son is because he was gay,” explained Reverend Daniels, who is sure that given the nature of the assault, his son had been perceived as gay.

“The way they burnt his private parts – why do this to my child?”

Elize Simon, the head of the King Road Weltevrede Neighborhood Watch raised the alarm on Monday evening when she discovered Neil’s still smouldering and burnt corpse, after arranging  a search party to look for the young man after hearing he had been stabbed earlier.

The Voice reports: “I thought let us see if we can stop the fire and as I walked into the reeds, I saw him laying there and I saw his legs first,” she recalls. “His feet weren’t burnt but he was burnt from the waist down. I saw the stab wound in his stomach.”

The father had been waiting for his son to come to church and knew something was wrong when he did not show up. When he arrived at the scene, after being called, forensic police did not want the Reverend to see his son’s face – it was too brutal, but the father was not speared the horror after a gust of wind lifted the plastic tarp, to reveal what no parent should ever see and not child should ever endure.

Notwithstanding the fact that South Africa has a Constitution that is fully inclusive of sexual orientation and gender identity, it suffers an enormous amount of homophobic attacks against its LGBTI communities, especially in Townships and nearby areas, to include an endemic incidence of so called “corrective rape” against lesbians.

To make matters worse in recent weeks the Traditional Chiefs, who have a far reaching voice in various communities have used their parliamentary positions and the Constitutional review Committee to call into question the equality and protective section pertaining to sexual orientation and gender identity in the Constitution, calling its revocation.

Such discussions have invoked anti-homosexual rhetoric by the leaders, such as that of Chief Patikele Hlomisa who heads the committee. The leaders who are discussing taking these rights away from the LGBTI people of SA, are influential Chiefs amongst their people who already have a difficult time accepting gay people in their communities.

While some noteworthy South African activists and politicians suggest that the LGBTI community should have no fear as their rights will  likely remain in tact , one cannot help but note that homophobic crimes will probably increase as a result of the discussions against gays.

The South African LGBTI community has held national protests against the Traditional leaders CRC because they believe that the mere discussion to revoke rights at a parliamentary level is extremely dangerous.  While this murder cannot be directly attributed to such, it is a time when LGBTI people in South Africa should be alert and speak up for their rights with one voice.

It should also be noted that although  hate speech is illegal in South Africa,  there is no specific legislation to categorize certain crimes as hate crimes.

Police spokesperson Lieutenant Colonel André Traut said no arrests have been made. *Anyone with information can contact Detective/Constable Vernon Amos on 021-5283800 or 0860010111.

*This article was sourced from Daily Voice

Homophobia In South Africa and the rampant crime of so called corrective rape. http://oblogdeeoblogda.me/2010/05/13/reblog-from-amanda-shocking-photos-of-corrective-rape-victim/