Lost-n-Found – A do it yourself homeless queer youth shelter

In the fall of 2011 I saw posts online about a new queer youth shelter opening in Atlanta.  Local homeless queer youth were being turned away from shelters and three locals who had been frustrated in their attempts to find them help, took it upon themselves to create an organization with an innovative protocol to fill the need.

They called a community meeting and raised $9,000.  Since that initial funding came by way of the Atlanta Sisters of Perpetual Indulgence, the new organization named themselves after the Sisters, “Saint Lost and Found.”  I eagerly watched online following their progress wishing I could somehow do the same here in Massachusetts.

This past weekend I was at the NGLTF Creating Change conference and was thrilled to discover an evening caucus was being presented by the now Lost-n-Found Youth, Inc. nonprofit corporation whose mission is to take homeless lesbian, gay, bisexual, and transgender youth off the street and transition them into more permanent housing arrangements, while operating a 24/7/365 hotline as well as a 6-bed housing facility.  Wow.  They also do lots of street outreach.

Like Massachusetts, Georgia has a 72-hour reporting mandate, so they are forced to restrict service to youth ages 18 up to their 26th birthday.  One of the presenters did admit he loses sleep because they can’t help the under 18 youth other than with street outreach.

Lost-n-Found (LnF), a nonprofit basically funded by “leather-men, drag queens, and bears,” has now helped over 125 homeless youth since starting about a year and half ago. They continue to operate as a 501(3)(c) not-for-profit entity taking no state or federal funding, to avoid the strings that are usually attached to such funding.  And they continue to be an all-volunteer organization, with one on-site house manager, living free of charge at their facility while receiving a small stipend. Their dedication to the cause to me is otherworldly.

Their 24/7/365 hotline is a Google Voice account, which is forwarded to 6 cell phones, simultaneously. They take great pride in the fact that it never takes longer than an hour to make contact if the phone is not answered immediately; and as if on cue during the caucus, one of those cell phones rang out loud and one of the presenters sprinted from the room to take the call.

Their 6-room facility is always full with a waiting list, so they have established a good working relationship with area youth shelters, such as their local Covenant House, so that they can actually assist in finding what often turns out to be a life saving safe space.

Due to zoning restrictions of their Atlanta neighborhood they are limited to 6 rooms only, and so on some nights when other assistance can’t be found the best they can offer are survival skills and tools; tents, tarps, and a recommendation as to which underpass is safe.

LnF is the only place in Atlanta that will take in trans youth, and as they described more than once as “heartbreaking,” are forced to tell them that they must dress their birth gender in order to get the job that is a requirement of being housed at Lost-N-Found.  According to LnF, Georgia social workers don’t even know what “T” stands for and in their many Christian shelters they can’t even “do” gay. For me sitting there listening in awe, I wondered if Georgia’s overall ineptness with and lack of interest in the queer youth wasn’t somehow working to Lost-n-Found’s advantage because clearly the State couldn’t care less about these youth and are likely happy to have someone else dealing with the issue.  LnF is an all-volunteer organization helping “adults”.  No need for the State to interfere.

Initially they were trying to house youth temporarily in hotel rooms, just to get them off the streets until they could find suitable housing in each case, but that proved unsustainable due to the costs incurred as it took a long time to actually find housing for each.

LnF supports street kids who don’t want to come in, youth who are overcome with the streets and do want to come in, and those who are able to couch surf.  In Atlanta they figure that 40-50% of the homeless youth they encounter are queer – something they describe as “massively over-represented, and massively under-served”.  They feel that all the strides the gay community has made is reflected down on the youth.  In Atlanta, youth who come out to their parents are kicked out inline with the national average of 25+% but more towards the upper age range of the college aged kids rather than those still in high school.

They do intake like a hospital, only relaxed.  Everyone is sent to be tested for HIV & STDs.  Their goal is to help the youth get jobs, become independent, and to survive out on their own.  LnF also helps those youth wanting to continue or further their education by helping them to enroll in college, tech schools, GED program, as the case may be.  They have volunteer counselors that come in for individual and group sessions.  The youth have to be ou 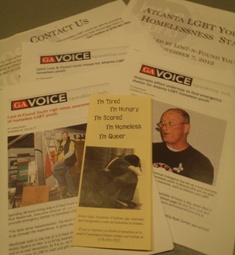 t of the house 9-5 working or looking for a job. Curfew is 9pm, and no drinking/no drugs is allowed.  However when they first arrive they get 1 to 2 weeks to chill and acclimate, then LnF works to try to get them out into some suitable housing within 90 days.

LnF would like to be the prototype for what can be done for homeless queer youth, because well “It’s not rocket science” – ha! – and “you just need to find the players”.  They continue to be funded by “drag queens, bears and leathermen” along with the gay community.

They suggest that if anyone wants to do something similar in their own city, they start with a hotline and connect to existing service providers.  This will allow for assessing the need in an area and provide one with the direction needed. If you need a place to start find your local Stand Up For Kids. They feel that if you have a committed group of activists and can raise the funds to get started you too can open a DIY HQY shelter.  They are more than willing to help anyone endeavoring to follow in their capable footprints and urge you to either email them at  or call their info line at 678.856.7824.

For Lost-n-Found, their goal is to someday have a transitional housing facility and with their dedication I have no doubt it will happen!

For me, clearly I need to find my local “leathermen, drag queens, and bears” and have a chat!

When a trailblazer from the San Francisco Bay Area optical scene went about building an LGBTQ focused eyeglass site, camp became an understatement, and high design was all but blurred in a flurry of retro with a swish that makes Ru Paul look tame. It works. A great site and a not to be missed visit. However that is not all its creator cares about. The site has a grand purpose and its mission is much more insight http://oblogdeeoblogda.me/2013/12/29/lgbtq-website-to-provide-eye-tests-and-glasses-for-homeless-gay-youth/