You are here: Home » Teaching Jihad to Children in Christian Based Hate Book

Teaching Jihad to Children in Christian Based Hate Book 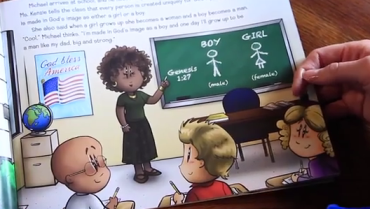 When I read about this book, God Made Dad & Mom, depicting the story of Michael, an adopted boy, who takes a trip to the zoo to learn how God made people — with a mommy and a daddy, and waged prayer war on friend Jimmy who had two dads, the first thing that came to my mind was one of those videos of  little kids being fed religious extremism at an early age, in preparation for Jihad.

Seriously that is what came to mind.  I mean in this climate of hate crimes against gay people, a direct reaction to the declaration of war on gays by religious Christian extremists, (circa 1974 Jerry Falwell through Lively, Engle,  Brown, Perkins et al 2013) I can only imagine the emerging mindset and frustration of a future 20 year old, who would have read such a book at age 6, and then wondered why the heck God had not answered his prayers, because gays are still in fact procreating and raising families.

My mind flustered with thoughts of Christian Jihad against gays starting with a sweet little book about hate disguised as love, with macho images alluding to the lie that manliness can only be found in heterosexuality, with only the latter acceptable in society.

According to a review in The National Memo : 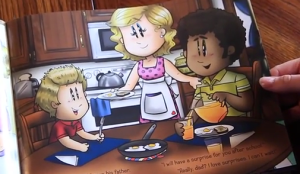 “After this failed fact-finding mission, Michael feels compelled to pray for the breakup of classmate Jimmy’s family, as his friend has been cursed with the immoral, unnatural situation of having two loving dads. “Dear Jesus,” implores little Mikey, “Please show Jimmy and his dads the truth about how you made them and how much you love them.”

Here the clearly confused author tells us that Jesus — not God — made people, which would be one neat trick, considering that Jesus was a person. That theological oopsie aside, the takeaway is that God’s/Jesus’ love, in right-wing nutso world, is not unconditional as per the Bible, but is instead contingent upon one’s private sex life being deemed acceptable by conservatives with whom one is unacquainted — and the government.

AFA president Tim Wildmon, who along with his similarly gay-obsessed partner in (hate) crime Bryan Fischer, has vowed to keep up the fight against what he calls “Big Gay,” has given the book his stamp of approval — seriously, it’s actually stamped on the front cover, they’re so darned proud of this dubious honor.”

No great surprise that the SPLC-designated hate group American Family Association has endorsed the book, and placed its seal of approval on indoctrinating the youth of the far Christian Right, Jihad style. No one else in their right mind would subject a child to such abusive license to judge. That seal and the designation “hate group” with it – should have Amazon reeling and removing the book from its catalogue. However thanks to Amazon we are now privy to the record amount of derogatory reviews of the book, as offended readers have not been silent: 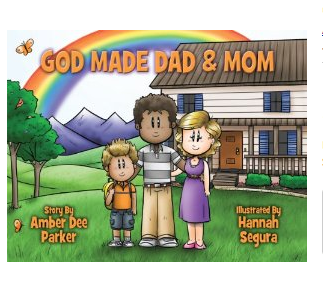 Amazon reviews  – this being one of my favorites:

“I was having difficulty trying to light the bonfire one night… Then I remembered that a lady from church gave me this book to read to my daughter. What a life saver! This thing burnt for a good 5 minutes and got that fire going strong! Great cover! Great paper quality! Great alternative to fire logs!

“Evil disguised as a childrens’ book May 23, 2013
By John H. Thiel –How do you brainwash little kids to hate gays and lesbians? Here is an example written by a pair of fundamentalist Christians. Lots of cute pictures and simple text conveying a message of hate. Sure to be popular with closet case homosexuals who hate themselves or for those screwed up parents who fear that their children might be gay.”

1.0 out of 5 stars NO STARS! Cleverly disguised hate. God made EVERYONE in LOVE. May 22, 2013 By MAZZ – This is the worst example of a children’s book I have EVER seen. This book deliberately teaches hatefulness, self righteousness and is judgmental. Using religion as a tool to make other equally loving family dynamics inferior is Just shameful. Teach your child LOVE inclusiveness and Kindness to others.THAT IS WHAT JESUS WOULD DO.

The book while purporting to speak truth, lies also through its omissions. It steers children from the reality and the ideal that God loves all – that all are made in God’s image – gay (LGBTQI) and straight and that God has been so so clever that HE has been able to accommodate his gay families through extraordinary creative means, all a concomitant of the metamorphosis of creation.

I am a lesbian who has produced two magnificent children; one daughter through adoption, where biological parents played the role on the procreation end of it,  but handed the baby to an overseas orphanage, and the second child through a sperm donor and insemination.  Even that makes a little more sense than the guy who was born to a virgin – not that I want to judge. But I will say that no one is born to virgins any more in this day and age.

After all the world has evolved and the Bible must be interpreted as a living document, in context and in light of our modern existence. Same-sex couples exist and are making families of their own and no amount of praying by the likes of a handful of little Michaels is going to change that beautiful and loving paradigm. God is brilliant in extending procreation to same-sex parents. We have children who are born with hearts that beat to the drum of a universe evolved through, not only adoption, but also through insemination, sperm donorship and surrogacy; we will procreate,  nothing will stop us and but for the religious zealots that attack our being, no one gets hurt. Surely if you believe there is a God one must believe that our means to create children is indeed God given? How can the life of any child not be God given?

So I think I am going to remind the author that she is simply ‘farting against thunder’ in her inept attempt to derail the real work of God – which is to include all of God’s children in the scheme of procreation, whether straight, gay or lesbian. I am also going to indict her hate, where in effect she is suggesting that kids pray that another child’s family will go away “POOF” into thin air.  How insidious and unloving to ask a kid to judge his friend’s family. I just cannot get over how disgusting that is – and then to drag God and Jesus into such hate is beyond me.

Of course we gay families tell our kids how they were made- we tell them the truth. In fact my daughter’s reality is her truth and it is as divine and as blessed as anyone else.

That all said, if you have the stomach, watch the holier than thou and qualifying as hate-monger given the myth and lies so perpetuated, author Amber Dee Parker, as she explains the story in the video below.  To use the theme of judgment and reprimand to have Michael pray so little Jimmy can disavow his own dads is so obtuse and vulgar a tale that it is tantamount to me writing a book asking little children to pray for the demise of their parents who impinge upon the word of God by serving up a ham at the Christmas dinner table for the bible tells us so.