I’m pretty sure last year I whined that I was never marching in Boston’s Gay Pride parade again because of the appalling corporatization. And then last week I heard that the amazing LGBT Asylum Support Task Force was looking for people willing to march with paper bags on their heads in solidarity with asylum seekers here in the U.S. , who are still too traumatized to be seen publicly.

Last year I was in the contingent behind Frito-Lay throwing little packets of their junk food into the crowd.  I asked the why the heck they were in the Gay Pride parade.  “Your company has a gay employees’ group…? The company donates some percentage of your profits to gay rights, or other human rights, efforts…?” None of them could tell me.  So clearly they had the funds to march and were keen on expanding their consumer base.  Sadly that fund requirement does nothing more than exclude grassroots groups like the LGBT Asylum Support Task Force from marching and expanding their desperately needed support base.  Luckily for the Task Force they are part of a church whose state-wide organization had the funds to get a contingent into the parade.  So I marched.

“It is illegal to be gay in 80 countries…” and “The people holding our banner with bags on their heads can’t be seen back home…” were the two most common responses we gave to the confused looks of many along the parade route.  I even handed a flyer to Rep. Ed Markey campaigning for Mr. Kerry’s seat.  I think he was a bit taken aback but then I had a bag on my head!

So in reality it is “illegal” to be gay in 76 country, plus 2 territories making 78. There are 87 countries with laws against homosexuality, 5 of which include the death penalty – Iran, Saudi Arabia, Sudan, Mauritania and Yemen – plus some parts of Nigeria and Somalia so maybe 7.  However you count, 5 is too many and 80 is an average, but whatever numbers you use they are all too large!

The current spate of laws like those just passed and/or proposed in countries like Nigeria and Uganda, and the fanned flames of homophobia in others like Zambia and Belize and Russia all of which we have reported on here on OBLOGDEE, are increasing the numbers of LGBTI people forced to flee the life threatening violence of their home countries.

The United States is actually not a very welcoming nation for political asylum seekers when you come right down to it.  We have a one year expiration to apply for asylum, a deadline that is currently one of the issues in the Comprehensive Immigration Reform battle that may or may not be eliminated or extended in the final version of the bill.  Just a chip in the game. Some other countries provide access to housing, some form of a stipend and help to secure pro bono legal.  The U.S.  does nothing to help asylum seekers get to the U.S.A. in the first place and then when one makes their way here, we kind of shake your hand welcome, wish you good luck, and you are on your own, often without the right or ability to work for extended lengths of time. 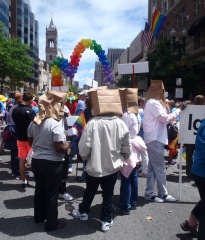 The Asylum Task Force in Worcester, MA is a grass roots organization who has helped over 50 individuals from 15 countries as of October 2012.  They get calls from all over the U.S. from other organizations desperate to find help for someone who has just arrived on their doorstep. Asylum seekers arrive here traumatized from the situation they were forced to leave, often having spent all their money just getting here, with no where to go since ex-pat communities won’t take in LGBTI asylum seekers as they do for other countrymen.

Last year of the over 36,000 people who were granted political asylum in the U.S. very few were granted for LGBT persecution. Would it really hurt the U.S. to find it within itself to provide some support?  One of our largest exports is homophobia, can that really continue to be ignored? Do we not owe amends?

So if you see or hear about a contingent marching in your Pride parade with bags please consider joining or supporting them.  There is a push to get more members of the LGBT Faith & Asylum Network to do the same  in their cities.

And consider heading over to the LGBT Asylum Support Task Force.  Check out what they are doing and maybe give them a little Pride donation.

Note from Publisher, Melanie Nathan: Please consider subscribing to OBLOGDEE and/or visiting again as we will be providing extended coverage and advocacy reports on the plight of LGBT Asylum seekers and the obligation we believe the U.S. and Obama administration has to provide more relief.