You are here: Home » Schedule Set for Historic Anti-gay Crimes Against Humanity Trial

Yesterday a scheduling meeting was held at the Crimes Against Humanity trial of Sexual Minorities Uganda (SMUG) v. Scott Lively.  Lively did not appear although he did have one supporter attend. In contrast, about 3 dozen supporters were there to support the Plaintiff, SMUG, from Stop The Hate And Homophobia Coalition, LGBT Asylum Support Task Force, Arise for Social Justice, Recovery Learning Center, and other interested individuals.

The main contention during the scheduling meeting was the protective order the Center for Constitutional Rights (CCR) and Sexual Minorities Uganda (SMUG) are trying to put in place to keep Lively from obtaining the identity and contact information of witnesses. The fear of reprisal by Lively and his “friends” in Uganda is real and worrisome.  Lively himself has already issued a “hit-list” on his blog of those he feels are responsible for the case, so Lively’s attorney from Liberty Counsel’s statement that concerns being expressed are “without merit” is outrageous.

Without such a protective order, gaining witness testimony will be impeded. Many people have seen the “Hang Them” cover of Uganda’s Rolling Stones tabloid, which endangered many Ugandan lives, including David Kato, who was murdered shortly after its publication. The Plaintiffs are eager to avoid life threatening situations again. The protective order issues were not resolved yesterday and will likely require action from the judge before discovery can move forward.

We were amazed to learn Lively had yet to answer the initial complaint! We also learned that Lively had rejected a settlement offer made by CCR’s attorneys. CCR reported in a follow up meeting with the Stop The Hate Coalition that the settlement offer, which is mainly non-monetary, will be made public at a later date.

Another interesting statement made by Liberty Counsel during the proceedings was that Lively does not want CCR  to have subpoena power to obtain evidence against him, as he wildly claims that such could ‘harm foreign relations.’  An amused and frustrated CCR, responded that it was too soon to know if that course would be needed.

There is a lot that must happen before the actual trial can begin, including probably yet another attempt by Lively for an unlikely dismissal. The final hearing before the trial is currently scheduled for May 6, 2015!

Enjoy some photos of the SMUG supporters: 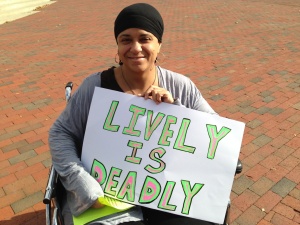 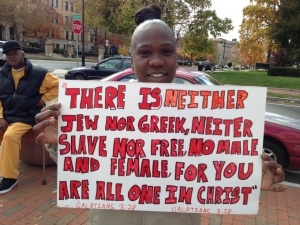 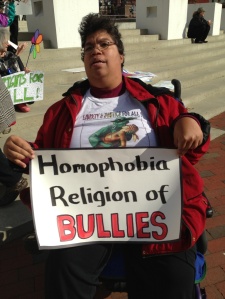 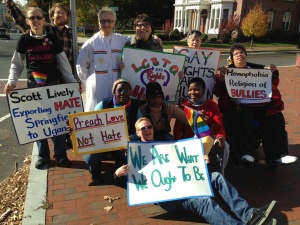 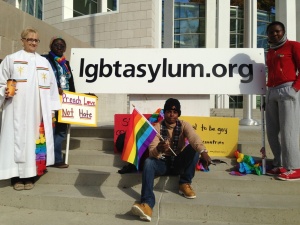 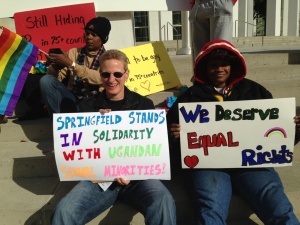 THE SMUG V. SCOTT LIVELY CASE IS A MUST ATTEND FOR LGBT COMMUNITY

Lively’s hate and persecution continues and so must we! By Cathy Kristofferson, October 25, 2013 Back in January, I blogged “Sexual Minorities Uganda v. Scott Lively – why you should care, why you should go!”  The case is ongoing and heating up.  Until now Scott Lively and his defense team have been mustering up every […]

Is Lively asking his flock to pray or prey? By Cathy Kristofferson, September 25, 2013 After failing, yet again, to have the case against him for Crimes Against Humanity dismissed, Scott Lively has sent what is tantamount to a persecutory email to his followers containing a ‘hit list’ of those who are supporting the prosecution […]

By Cathy Kristofferson, September 23, 2013 Today Scott Lively suffered another defeat in his quest to have the Crimes Against Humanity lawsuit brought against him by Sexual Minorities Uganda (SMUG) dismissed. As we reported here on OBLOGDEE, the Federal Court in Springfield ruled against Lively on August 14th to deny his first Motion To Dismiss, which […]

Evangelical homophobia spread in Uganda same as done in Russia and worldwide By Cathy Kristofferson, August 14, 2013 We are rejoicing today in Massachusetts. The Springfield Federal Court has ruled favorably, denying the motion to dismiss, in the Crimes Against Humanity case brought against the Commonwealth’s most anti-gay resident Scott Lively. The Sexual Minorities Uganda (SMUG) v. […]