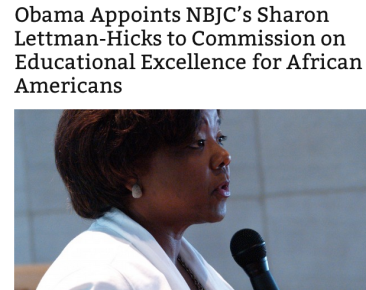 NBJC BLOG: On the same day President Obama announced his nomination of Staci Michelle Yandle, the first black LGBT judge to be appointed in 20 years, he also made public his intention to appoint 15 individuals to the President’s Advisory Commission on Educational Excellence for African Americans.

Among the members that will advise the President and the Secretary of Education is Sharon Lettman-Hicks, Executive Director and Chief Executive Officer of the National Black Justice Coalition, a civil rights organization dedicated to empowering black LGBT people by fighting racism and homophobia. A self-proclaimed “sistah in the movement,” Lettman-Hicks has worked on a number of initiatives ranging from social justice to equality in support of black LGBT people.

Newly appointed members of the commission will be tasked with “strengthening the nation by improving outcomes for African Americans to ensure that all African Americans receive an education that prepares them for college, productive careers, and satisfying lives.”

Click here to read more from the White House.

WHY I FEEL SHAME ON THIS MARTIN LUTHER KING JR BIRTHDAY

NBJC, Led by Sharon Lettman-Hicks fails to speak out against passage of anti-gay Bills in Africa – Perhaps out of mission?

Why this MLK Day feels like no other to me!

I cannot help but wonder about Dr. Martin Luther King, Jnr. and what he would done about the Anti-Homosexuality Bill in Uganda, as well as the Jail the Gays Bill in Nigeria.

I imagine Dr. King in the context of today: a non segregated America, with an African American President, support for equality and a surge of global anti-gay sentiment that is torturing and killing Africans, with very little outcry from U.S. Civil rights organizations as well as Christian and other religious groups.