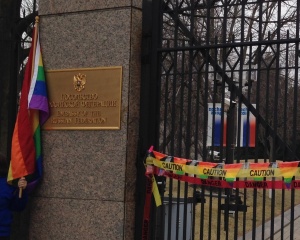 With the Red Army Choir belting out the Russian Anthem in the background, intrepid activists today protested at the Russian Embassy in D.C.  Signs held read “Love Not Hate. Stop Killing Us”, “Discrimination is Incompatible with Olympics” and Scott Wooledge’s masterful “Silence = Death” on the Russian flag. Caution and Danger tape combined with rainbow flags were affixed to the front driveway gate of the Embassy.

The LGBT community of Russia is not safe from the laws and lies of Vladimir Putin. Today’s message is we stand in solidarity with our LGBT brothers and sisters. #CheersToSochi. Tell the Russian Government and the International Olympic Committee that gay bashing is not an official Olympic Sport!

The International Olympic Committee is complicit with Putin ignoring all the human rights violations committed in Russia. This includes not only the LGBT community, but also against ethnic minorities and women, DIRECTLY violating Principle 6 of the Olympic Charter.

Friday, the day of Sochi’s Open Ceremonies, pro-gay citizens with rainbow flags were arrested in both Moscow and St. Petersburg Russia.  Anti-gay protesters in Sochi were left alone because of course it is only illegal to promote homosexuality, not denigrate it.

The only response from inside the Embassy was someone named Alexander who came out to tell us America has more severe laws against its own LGBT community. Why aren’t we protesting those instead? He had not heard of Lawrence v.Texas, nor had he heard of any recent protests in Russia. My, that Kremlin Kool-aid must be tasty.

The Russian Embassy did call the police who arrived after 30 minutes to break up the protest on their private property. Protests will continue as long as the LGBT communities worldwide continue to be subjected to persecution and violence as a tool for distraction by failed governments. We are looking at you too Uganda, Nigeria, …