You are here: Home » While Museveni Signs Anti-Gay Bill he Provides Excuses to Obama

While Museveni Signs Anti-Gay Bill he Provides Excuses to Obama 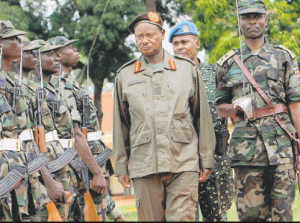 Reports have come in, which remain unverified, that President Yoweri Museveni has signed his assent to The Anti-Homosexuality Bill in Uganda. The Bill, once referred to as The Kill the Gays Bill provides stringent prison sentences, of up to Life In prison, for so called aggravated homosexuality. It also provides jail terms for those “promoting” homosexuality, a mythological and yet to be properly defined terms,.

The Bill is seen by many around the world as state sanctioned persecution of gays, brought about through the promotion and direct influence of Evangelicals in the United States, including Scott Lively and Lou Engle, known to have exported their hate of gays to countries abroad, and now standing accused of participating in actions that brought about this Bill.

Uganda’s President Yoweri Kaguta Museveni has responded to criticisms from the USA, where President Barrack Obama said passing the anti-homosexuality law would complicate relations between the two countries.

“I would like to discourage the USA government from taking the line that passing this law will “complicate our valued relationship” with the USA as President Obama said.

“Countries and Societies should relate with each other on the basis of mutual respect and independence in decision making,” Museveni said in a statement. (below)

He reassured all Ugandans and the international community of its continued commitment and respect for the rule of law.

Activists are excited at one thing and that is the Rule of Law, as many are confident that the Ugandan Courts will strike down the law as unconstitutional, while the international community rebukes it as a flagrat disregard for The International Declaration of Human Rights.

Below is President Museveni’s full response to President Obama and his justification for signing the Bill.

It is hard to believe that this crazy statement is from a head of state. It smacks of the blood of Idi Amin!  One wonders how he thinks we believe any of this junk, when we all know that Museveni is using this BILL to pander to his Party NRM and Members of Parliament, needing their vote to reestablish his future leadership and his desire to dictate for another 26 years. 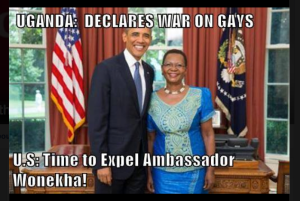 The basis for the Bill, promotion, recruitment and the accusations of harm it can cause are based on Myth and lies. Museveni tries to distort the scientific basis to his use. He fails miserably and should not for one minute think that people around the world will be deceived. He also under estimates the world outcry and where this will lead.

He also  declared war on gays in a statement he made at the NRM retreat and that these declarations will be taken seriously.

Now it is time for 3 sets of action:

1) Boycotts and protests and all that goes with stomping out state sanctioned persecution;

2) Diplomatic recalls and sanctions; and

President of the Republic of Uganda

I have seen the statement H.E President Obama of the USA made in reaction to my statement that I was going to sign the anti-homosexual Bill, which I made at Kyankwanzi.   Before I react to H.E. Obama’s statement, let me, again, put on record my views on the issue of homo-sexuals (ebitiingwa, bisiyaga in some of our dialects).  Right from the beginning of this debate, my views were as follows:

1. I agreed with the MPs and almost all Ugandans that promotion of homosexuality in Uganda must be criminalized or rather should continue to be criminalized because the British had already done that;

2. those who agreed to become homosexuals for mercenary reasons (prostitutes) should be harshly punished as should those who paid them to be homosexual prostitutes; and

3. exhibitionism of homosexual behavior must be punished because, in this part of the World, it is forbidden to publicly exhibit any sexual conduct (kissing, etc) even for heterosexuals; if I kissed my wife of 41 years in public, I would lose elections in Uganda.

The only point I disagreed on with some of the Members of Parliament (MPs) and other Ugandans was on the persons I thought were born homosexual. According to the casual observations, there are rare deviations in nature from the normal.  You witness cases like albinos (nyamagoye), barren women or men (enguumba), epa (breastless women) etc.

I, therefore, thought that similarly there were people that were born with the disorientation of being attracted to the same sex.  That is why I thought that that it was wrong to punish somebody on account of being born abnormal.  That is why I refused to sign the Bill and, instead, referred it to our Party (the NRM) to debate it again.

In the meantime, I sought for scientific opinions on this matter.  I am grateful to Ms. Kerry Kennedy of the USA who sent me opinions by scientists from the USA saying that there could be some indications that homosexuality could be congenital.  In our conference, I put these opinions to our scientists from the Department of Genetics, the School of Medicine and the Ministry of Health.

Their unanimous conclusion was that homosexuality, contrary to my earlier thinking, was behavioural and not genetic.  It was learnt and could be unlearnt.  I told them to put their signatures to that conclusion which they did.  That is why I declared my intention to sign the Bill, which I will do.

I have now received their signed document, which says there is no single gene that has been traced to cause homosexuality.  What I want them to clarify is whether a combination of genes can cause anybody to be homosexual.  Then my task will be finished and I will sign the Bill.

After my statement to that effect which was quoted widely around the World, I got reactions from some friends from outside Africa.  Statements like: “it is a matter of choice” or “whom they love” which President Obama repeated in his statement would be most furiously rejected by almost the entirety of our people.

It cannot be a matter of choice for a man to behave like a woman or vice-versa.  The argument I had pushed was that there could be people who are born like that or “who they are”, according to President Obama’s statement.  I, therefore, encourage the US government to help us by working with our Scientists to study whether, indeed, there are people who are born homosexual.  When that is proved, we can review this legislation.

I would be among those who will spearhead that effort.  That is why I had refused to sign the Bill until my premise was knocked down by the position of our Scientists.

I would like to discourage the USA government from taking the line that passing this law will “complicate our valued relationship” with the USA as President Obama said.  Countries and Societies should relate with each other on the basis of mutual respect and independence in decision making.

“Valued relationship” cannot be sustainably maintained by one Society being subservient to another society.  There are a myriad acts the societies in the West do that we frown on or even detest.  We, however, never comment on those acts or make them preconditions for working with the West.

Note the Parliamentary website still shows the bill as awaiting assent: Notorious though as the site is for not being up to date: 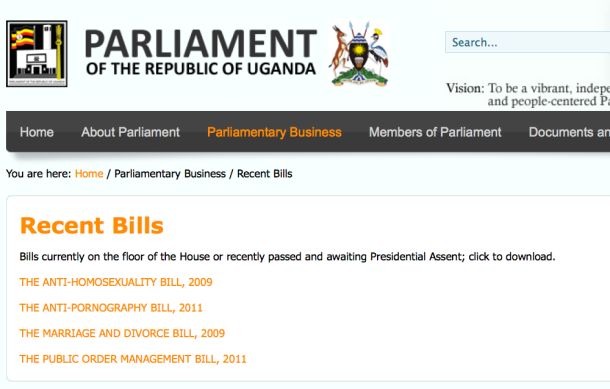 U.S.A. should expel the Ugandan Ambassador as Museveni declares War on Gays in World

GO HOME Uganda’s ambassador Oliver Wonekha – President Obama has the backs of the Gays around the world and Museveni says he has declared war upon Gays –  Surely we should acknowledge this WAR? 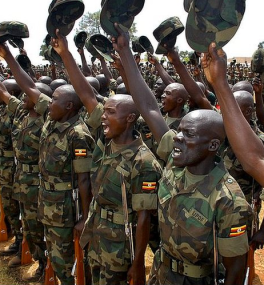 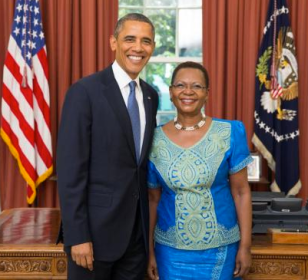