…so we can stop talking about it!”

Uncharacteristic disclaimer: Although the following blog post might appear we have distain and regret regarding this event, we really applaud the magazines for bringing this somewhat substantive crowd together during such a star-studded feel-good discourse-free correspondents dinner weekend. We encourage The Atlantic and National Journal to continue this LGBT event annually until we have full federal equality.

The Atlantic and National Journal hosted their annual White House Correspondents’ Weekend Editorial Briefing early Saturday gathering for a breakfast panel on the evolution of LGBT rights. At the event hotel’s entry, attendees were greeted by a street theatre skit asking why the President has yet to sign the Executive Order for LGBT job protections for Federal Contractors. As we all know, executive action on LGBT job protection was a promise made on the campaign trail back in 2008 and most recently endorsed as no having adverse just last week by Joe Biden.

Park Hyatt hotel management, on the other hand, was not so supportive. They came out once to move us away from the area immediately in front of the entrance off to an area to the side. On their second visit they shared we were “offending” event guests by offering them our flyer which was primarily a reprint of the recent HuffPo article by Jennifer Bendery printed on fluorescent pink paper.

Hotel management told us event organizers threatened to not allow us to attend the event we had successfully RSVP’d, if we didn’t stop. Accepting the potential consequences, we of course continued. How surprising two organizations whose mission depends on putting words on paper were threatened by ours. We asked that the event organizer offended by paper to please come speak with us directly, but in the end no one did and we were allowed to attend the blini-making mimosa-flowing affair.

Randi Weingarten commented that “As fast as we’ve gone w/ marriage equality is as slow as we’ve gone w/ ENDA.” Some of us, feel marriage equality hasn’t been so “warp speed” having begun decades ago but perhaps she shares Jo Becker’s view that the marriage fight began in 2008.  Mistakenly though, Randi said that the Executive Order wasn’t needed if we could get ENDA passed, reflecting her own tweet that “ENDA should be a no-brainer. All workers deserve equal protection on the job. How has it stalled? We have to push harder.” She did not however make mention of the onerous religious exemptions the stalled ENDA is currently saddled with. Considering Randi is President of the American Federation of Teachers you would think she was aware of not only those, but also aware that so many teachers in religious schools would remain unprotected even if that ENDA was passed in its current form.

“An executive order would allow the government to terminate a contract based on a company’s discrimination against its workers, which ‘creates a very high incentive for contractors’ not to discriminate. ‘It’s a very big deal, and it’s also why we need both ENDA and the executive order.’”

Aisha Moodie-Mills, Senior Fellow and Director of the FIRE Initiative at the Center for American Progress, tweeted out the great quote from Allyson Robinson, formerly of OutServe:

Aisha had her own great quote when speaking about the Human Rights Campaign’s recent announcement of their push for equality in the south by stressing “The messenger is just as important as the message” meaning she was cautioning them not to send their typical contingent of gay white males as many have said about their new mission abroad.

Cynthia Nixon gets the award for most improved messenger, definitely working with someone on her message – Carl Siciliano of Ali Forney perhaps, delivered a polished message that in her mind, for the LGBT movement, “it’s all about the kids.” She commented on the issues of homelessness, particularly for trans youth of color.

Bishop Gene Robinson spoke eloquently, as usual, about religious discrimination noting “Even people who haven’t attended church for decades feel free to quote scripture to us.”  He also surprisingly said that he had spoken with an Evangelical leader whose main concern seems to be that the fear “we will do to them, what they did to us.” I guess at least we should be aware that they know what they have done is evil. Yet, no more less evil than their current campaign to pass religious liberty bills aimed at codifying discrimination against the LGBT community into law often where protections don’t even exist.

John Lovett, who arrived late, perhaps bleary eyed from finishing up work on President Obama’s speech for later in the day, commented we need “to win with the confidence to let those people exist” and suggested we be tolerant of those who are intolerant. Really? Much thanks to John Becker(twitter handle @freedom2marry) towards the end of the event taking him to task:

But in none of the commentary about marriage and job protections did anyone on the stage follow up with a comment about the depth of religious exemptions that have already been written into law to “win” in some of the 17 States now that have marriage equality, nor about those currently contained in ENDA 2013.  Unfortunately Evan Wolfson, who was on the promotional email, was a no-show. Perhaps he could have provided insight Marriage Equality USA having been involved in those campaigns. 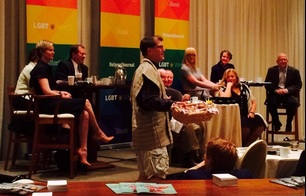 Sadly, despite Aisha, Gay and Lesbian Victory Fund Managing Director Torey Carter and White House LGBT liaison Gautem Raghavan on the speakers list, no one of color made it up on the stage which was a sad reflection of the LGBT movement. And does the Atlantic have a lesbian, or someone of color, perhaps both per chance, who can moderate a panel without being so overtly condescending from such a place of privilege as The Atlantic’s Steve Clemons?

Bookmarking the day, less than 12 hours later watching attendees arrive for the Correspondents Dinner, we had a nice opportunity to engage Darryl Issa on blocking ENDA in the House and an EO shout-out made to Jay Carney as he blew by. The Scandal actors we had seen earlier in the day stopped to offer words of support.

Hopefully our message made it in to the festivities, or better yet Hillary Rosen’s thought from earlier in the day:  “The president needs to sign this damn executive order already so we can stop talking about it.”