You are here: Home » Outrageous lies by Ugandan Government regarding the Anti-Gay Laws

Outrageous lies by Ugandan Government regarding the Anti-Gay Laws

The Ugandan Minister of Foreign Affairs is attempting to avert Ugandan fears that the international community will cut aid to Uganda and has allegedly provided some assurances to the Europeans and Americans which are already proving to be untrue. The Minister’s assertions appear in a post on Parliament’s main website, under the header:  ““No more aid cuts over Gay law,” Okello Oryem.” He noted:

“We re-assured the diplomatic community on their concerns about homophobic reactions by the members of the public. This seemed to calm down their tempers. The European Union delegation assured us that there would be no more aid cuts,” he said.”

The Ugandan Government has not been exactly on the up and up and so when I see a post like this on the Parliamentary website, (below)  I have doubt that it is truthful – and by that I mean not only the content, but also the expressions of so called reassurance by the Minister on behalf of the Ugandan Government.

Just 2 weeks ago, here on OBLOGDEE we exposed the out and out lie that appeared on the Ugandan U.S. Embassy website, where the Ambassador alleged that NTA had entered into a travel partnership with Uganda. When I called on NTA to explain how they could have done so, in light of the anti-homosexuality laws in Uganda, the NTA denied the partnership in a written statement to us and we published it on this BLOG. When I contacted the Ugandan Ambassador for a response, accusing her of lying, the only reply I got was via a Tweet on Twitter stating “Don’t you have anything better to do with your time #Waste.”

So here is the latest post on the Parliament website – and lest we forget this is the very parliament that recently passed the Anti-Homosexuality Act and the very Parliament that yields a President, MP’s and a speaker who said they did not care how the world responded to The Anti-Homosexuality Act, and that they did not care if aid was to be withdrawn as a result:

The Minister of State for Foreign Affairs Hon. Okello Oryem says that the European Union has assured the Ugandan government that there will be no more acts over the Anti-Homosexual Act:

Hon. Okello Oryem says that two meetings were held with both the European Union ambassadors on 28th  March 2014, and a second one with the United States Ambassador following the passing of the anti-gay law and its assent by the President.

The Minister made this revelation while meeting the Committee on Foreign Affairs as it considered the ministerial budget Framework Paper for the financial year 2014/2015.

He said that these delegations were assured that the Anti-homosexuality law would not be revoked or changed in any form but assurances were given on its implementation putting into consideration the Cotonou Agreement.

“We re-assured the diplomatic community on their concerns about homophobic reactions by the members of the public.

This seemed to calm down their tempers. The European Union delegation assured us that there would be no more aid cuts,” he said.

He said that the United States is still considering this stand and will soon come out with its declaration.

The Minister however, added that any form of promotion of the homosexuality vice in public would be punished and those liable would be charged according to the law.

“As much as we shall not pursue those who do their acts behind closed doors, we shall deal with anybody who engages in this act or its promotion of homosexuality in public and these will be dealt with accordingly,” he warned.

Hon. Okello Oryem added that homosexuals will not be denied access to medical care and any others services which they will seek unlike in other countries where they are pursued and prosecuted.

“No one should be denied medical services, education or work because of their sexual orientation,” he concluded.

What the Minister does not seem to comprehend is that the law is in and of itself persecutory. Not only is it discriminatory, but it serves to set up a populace against a minority. What the Minister does not admit is the fact that the persecution of gays has been happening in his country since the law was first introduced in 2009 and that it is far too late to attempt to provide any of these reassurances.

What the Minister does not understand or chooses to turn a blind eye to, is the fact that his people are already hounding gays, whether in the privacy of their homes or not, that people’s homes are being raided by police and they are hauled off to jails, unless, in some cases, they agree to pay bribes to avoid the arrests. What the Minister does not seem to comprehend is that the law is unconstitutional and a breach of The Universal Declaration of Human Rights.

So has he fooled anyone? Has he fooled the European and American Ambassadors. I think not. And I for one am going to make sure that I start providing our Ambassadors with confidential reports of all the stories I have been receiving, that we have chosen NOT to report in the media, for safety and security concerns of the LGBT people on the ground. There are many stories of abuse and we shall pass them on.

If the European Ambassador and the U.S. Ambassador are going to listen to the Minister’s reassurances, they are in fact listening either to someone who is uninformed, a liar or someone who just plain cannot comprehend the impact of the law and the repugnant harm it has caused and continues to deliver.

LGBTI people have no recourse – just by virtue of a law that reigns terror over good people, while it stops support in its tracks just because of the so called “promotion” clause which instills fear in all those trying to help LGBT people – even medical doctors. Now LGBT people are in effect barred for seeking any recourse even if persecuted. They have no help or services. If attacked the last people they can turn to are Police,  and all because of the mere existence of this law.

So how does Mr. Minister propose reigning in the already vehemently retributive populace. What is he doing to change the horrendous existing anti-gay milieu, now exacerbated buy this legislation?

In short he is damn stupid or lying!And I am sure the Americans and Europeans will not be taken for fools.

Hopefully all and any reading this post will ensure they do their bit to protest these lies by informing the American Ambassador or European Ambassador that we the LGBTI community in the Diaspora and allies are not fooled – we know the facts and that we still expect effective mechanisms to force the Ugandan Government to repeal the law. We will not rest until it is fully repealed and we expect our representatives to act accordingly. 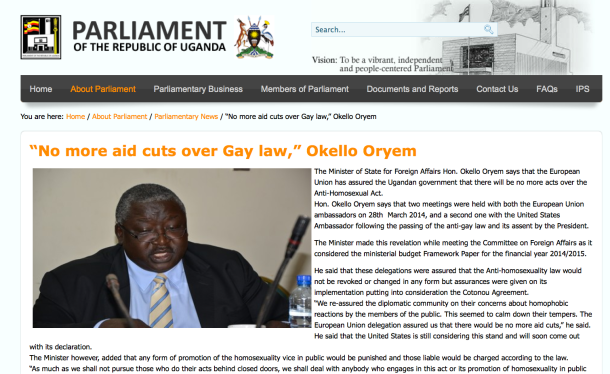