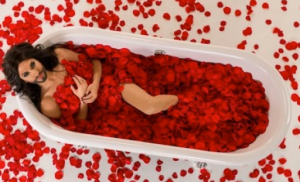 Congratulations Queen Conchita the Eurovision winner for Austria’s victory – its a first in 48 years! And she won despite Ukraine and Russian attempts to ban the bearded drag artist.

The 2014 Eurovision Song Contest has been won by Austria and Conchita Wurst. Her entry ‘Rise Like a Phoenix’ stormed to victory picking up a multitude of ‘douze points’ from across the continent.

Austria won the Eurovision Song Contest with 290 points, a winning margin of 52 over second placed Netherlands with 238 and Sweden were third.

Despite calls from Russia and Ukraine for her entry to be blocked, even Russia gave her five points and Ukraine sent eight points to Conchita.

Although officials describe Eurovision as a non-political event meant to unite Europe through song, politics inevitably colors the voting and the performances.

And this year’s win sent a message spelling a BIG “F U Homophobe Putin.”

Europe speaks acceptance for gender identity freedom as the bearded Drag artist is declared the winner – by votes with over 180 million TV viewers. Did I screams – “F U HOMOPHOBE PUTIN?”

See Conchita interview about the song resembles his life and rising out of difficulty. “If you not hurting anyone you can do anything with your life!”