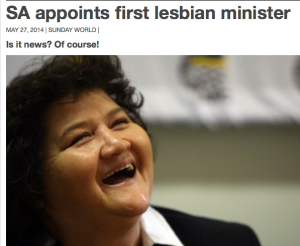 Lynne Brown, 52, is the first openly lesbian cabinet minister in South Africa’s history and also the first on the continent. South African president, Jacob Zuma, has appointed Brown who is now the country’s first openly lesbian (LGBTI) cabinet minister, a move thought also to be a first in Africa and a symbolic step on a continent where homophobic laws and persecutions are on the rise.

Brown was born in Cape Town and was premier of Western Cape until the African National Congress (ANC) lost control of the province to the opposition Democratic Alliance in 2009.

According to a 2008 profile of her by the South African Press Association, she began her career as a teacher and gained a certificate in gender planning methodology at University College London. “I can’t bear working in an environment where things don’t get done,” she was quoted as saying. “I’m not a flamboyant type of person; I get things done.”

This quite a feat – because while South Africa has an all inclusive and progressive constitution, there is still much homophobia in the country.