The Ugandan government issued a statement about a so called misinterpretation of the newly enacted Anti-Homosexuality Act, (see below,) which seems to suggest some back peddling from the “letter of the law.” This flip is nothing more than a flop!

At the time of signing the Bill, Uganda’s Government, Church leaders and general populace celebrated with a huge rally and stadium event, rewarding President Museveni with accolades, plaques and promises of a vote. The anti-gay fervor reached fever pitch and Museveni was hailed for pleasing the people by assenting to the popular bill.

According to Sexual Minorities Uganda (SMUG) the Bill’s passage and subsequent enactment caused over 163 incidents of anti-gay incidents, ranging from assaults to evictions and more.

This statement seems to be the reaction to the ‘punishment’ being metered out by the USA and other countries against Uganda’s enactment of the Bill and the ensuing persecution.

However, what does it really mean? Is it a note of regret? Does the Government really mean what it says?  Is Uganda trying to placate its so called “development partners?”

When I read it my first thought was the one big elephant in this room and it was that elephant that served to stomp on and negate this statement in its entirety. And that elephant’s name is “LAW” This statement contradicts the law. Surely the Ugandan government does not really believe that anyone would be duped into thinking that the Anti-Homosexuality Act of 2014 is only about preventing so called “promotion” of homosexuality.  Surely if the law was intended only to curb ‘promotion’ the Parliamentarians would have done just that – enacted legislation that curbed so called “promotion,” only. But like it or not Uganda – your democratic process yielded a law that sends people to jail for 14 years to life for homosexual acts.

If we are to believe this statement, then in finalizing the guidelines for implementation of the Act, surely we can expect that people will not arrested for sexual activities in the privacy of their homes.

Treating people equally surely means that it will be unlawful to evict and fire people because one suspects they are gay. What about the many who have already been fired and evicted because employers and landlords have been led to believe that hiring and housing LGBTI people is tantamount to promotion. It may be fun to start seeing some arrests of people who have threatened mob justice. And what if a policeman does make an arrest under the law? Would the government tell that police officer that he misinterpreted it too?

The only good news from this statement is an indication that Ugandan Government must be regretting the law as it is, albeit merely on paper, willing to be seen to NOT be standing behind it – despite Museveni’s declaration of War against the World’s gays.  And to hide their shame and regret is simple strategy so typical of the mindset of a persecutor and that is “We have been misinterpreted”.  Lest we forget the “LETTER OF THE LAW.” 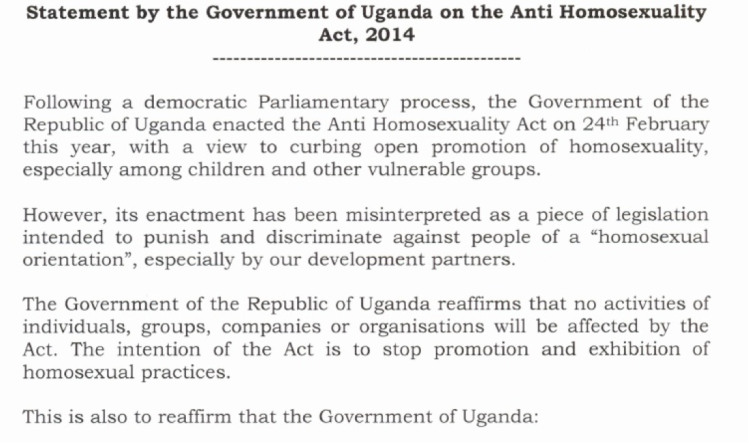