“The lesson from today’s conference is clear,” said Aaron Belkin, Director of the Palm Center and a professor of political science at San Francisco State University. “Transgender personnel serve successfully in foreign militaries, and inclusive policy will be successful in the U.S. as well.”

​Today’s conference included currently serving transgender personnel from the United Kingdom, Canada, Australia, New Zealand and Sweden.​  An estimated 15,500 transgender individuals currently serve in the U.S. military, but they are banned by Pentagon rules from serving, and if their identity is discovered, the military is required to discharge them.

James Esseks, Director of the ACLU Lesbian Gay Bisexual Transgender & HIV Project, and a co-organizer of the conference, said: “It’s time for the U.S. to embrace all LGBT military personnel. Full inclusion for transgender service members is a reality across the globe.”

The conference included panels on military diversity, stories from combat zones, and discussion of lessons and best practices from allied militaries. In one panel discussion on “Deployment in Austere Conditions,” transgender service members from the Australian and British armed forces, along with Landon Wilson, a transgender U.S. navy veteran, shared their stories from the front lines.  A full agenda of the conference, including bios and photos of today’s participants can be found, here.

According to Major Alexandra Larsson of the Swedish Armed Forces, “The Swedish Armed Forces supports transgender service members based on the general anti-discrimination laws for transgender people, which all government agencies are obliged to follow. Our Chief of Defence and Minister of Defence have also provided great support for LGBT rights by leading the Military LGBT section during the Stockholm Pride Parade this year.” 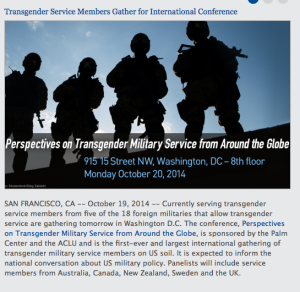 Said U.S. Navy Veteran Landon Wilson, “When I served in Afghanistan, I worked directly with troops from Britain and Australia, whose militaries welcome transgender service. Today, I am proud to share my story alongside international counterparts in the hope all of our nations will adopt inclusive policy.” The U.S. Navy discharged Wilson when commanders discovered that he is transgender.

From Sarah Maskell, Royal Armed Forces, in response to how does including transgender personnel affect operational effectiveness: “The more open you can be the better because you are going to get more out of people.”

​This year, Palm Center studies by a former U.S. Surgeon General as well as retired General and Flag officers showed that there is no medically valid reason for firing transgender personnel and that the adoption of inclusive policy would not be burdensome or complex.​

The Palm Center’s most recent study, “Report of the Planning Commission on Transgender Military Service,”  found that allowing transgender personnel to serve in the military “is administratively feasible and will not be burdensome or complicated.

For nearly 100 years, the ACLU has been our nation’s guardian of liberty, working in courts, legislatures, and communities to defend and preserve the individual rights and liberties that the Constitution and the laws of the United States guarantee everyone in this country. Whether it’s achieving full equality for the LGBT community, establishing new privacy protections for our digital age, ending mass incarceration, or preserving the right to vote or the right to have an abortion, the ACLU takes up the toughest civil liberties cases and issues to defend all people from government abuse and overreach. With more than a million members, activists, and supporters, the ACLU is a nationwide organization that fights tirelessly in all 50 states, Puerto Rico, and Washington, D.C., for the principle that every individual’s rights must be protected equally under the law, regardless of race, religion, gender, gender identity, sexual orientation, disability, or national origin.​

About the Palm Center

The Palm Center, a research initiative of the Department of Political Science at San Francisco State University, is committed to sponsoring state-of-the-art scholarship to enhance the quality of public dialogue about critical and controversial issues of the day. For the past decade, the Palm Center’s research on sexual minorities in the military has been published in leading social scientific journals. The Palm Center seeks to be a resource for university-affiliated as well as independent scholars, students, journalists, opinion leaders, and members of the public. For more information, see www.palmcenter.org