YES! for Gay People in Dutch Reformed Church – NG Kerk  – There were Tears of joy after the announcement.

History was made in South Africa today, when the synod of  what was once probably the most conservative church on the planet, the Dutch Reformed Church, (NG Kerk/ DRC) in an overwhelming majority,  voted in favor of ordaining gay ministers and blessing same sex unions.

Translating from the Afrikaans language I was able to determine this:

The DRC’s general synod chose to move forward with regard to the church’s position on gay relationships. Two proposals before the Synod were received as follows: Dr. Andre Bartlett  with 102 votes against the 88 votes received by Dr. Chris van Wyk’s  proposal. Van Wyk’s proposal asked that further research on the matter occur  before a decision was to be made. But it was decided that the time  to keep researching and not make a decision, is over.

“I was flabbergasted, but I think it’s a great step forward for the restoration of the dignity of our church’s gay members,” Bartlett said after the announcement of the vote.

Bartlett’s proposal noted that heterosexual and homosexual couples in a relationship of “personal faith obedience to the Lord,” must be allowed to fully participate in all the privileges of the church. 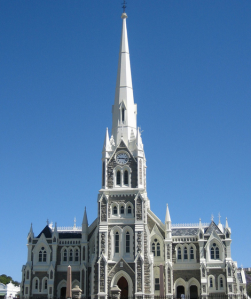 It was however stated that there would be no forcing of the issue.  Because some in the Church continue to believe marriage should be between a man and woman, an element of discretion is still given to the church councils to formulate their own practices and rules.  It was stated that no one should be forced to conduct gay marriages, because there is such a diverse amount of views within the church about it.  (Source Netwerk 24)

This new ruling where the Church in essence now approves same-sex marriage and the ordaining of gay ministers may be the saving grace for the Church’s sliding popularity.

This is the Church that once all but controlled a country which thrived on discrimination.  It may even be described the as the religious wing of Apartheid.  Drawing on an old article in the Mail Guardian,  “The Slow and Steady Death of the NG Church…”  Charles Leonard back in 2010 paints this picture:

“It was once described as the National Party (The Afrikaner Apartheid party) at prayer. But the Dutch Reformed Church numbers are dwindling. Charles Leonard finds out why.

It was during the one beautiful Afrikaans hymn that I closed my eyes and I was instantly transported about 40 years back to the platteland Dutch Reformed Church in which I was brought up.

I am a teenager in my dark green suit sitting close to my mom on the brown benches. My dad is sitting in the elders’ benches next to the pulpit. The grey-faced, toga-clad dominee’s droning voice and the airless church are dragging heavily on my eyelids. Not even the mint imperials my mom is feeding me are helping to keep me awake. At least the occasional singing brings variety, although the congregation lags a bit behind the histrionics of the organist.

That formerly omnipotent Afrikaner church I grew up in is in trouble. Officially it lost 20 000 members last year, even though the real numbers are likely to be much higher. It had always turned away people with different ideologies, skin colours, and sexual preferences. Now, it seems, we are witnessing the book of Exodus’s “jealous God, punishing the children for the sin of the fathers to the third and fourth generation of those who hate me”.

Three, four decades ago Afrikaners could hardly get a job without a reference from their dominee. But, at some point that all changed.

“The church lost its grip over people,” says Jean Oosthuizen, the progressive news editor of the Die Kerkbode (The Church Messenger), which once acted as National Party praise singer and the Dutch Reformed Church’s Pravda during the apartheid days. He says many lost faith in the church because of its actions in the past.

“The Afrikaans churches’ support for apartheid is now costing them a lot. Many people feel cheated and want to know, if the church lied to them about apartheid, what else it is lying about?”

They never had a proud record when it came to inclusiveness. They discriminated against women, who were not allowed on their pulpits, and black people, who were not allowed in their white churches. And, as Oosthuizen points out, women are still not allowed to preach in the Gereformeerde Kerk (Reformed Church), and the Hervormde Kerk (Restructured Church) is still arguing over whether apartheid was a sin. These days, almost all the Afrikaans churches seem to discriminate against gay people, except perhaps one.”

Soon after the end of Apartheid, South Africa enacted an all inclusive constitution which prohibits discrimination based on gender, gender identity and sexuality, protecting all LGBTI people. It seems that this is one Church that is catching up with the times, albeit 20 years into the New South Africa. There are other Churches in the country which still have a long way to go.

My comment: As a South African who grew up knowing a lot about this Church and its impact on South Africa, during the Apartheid era, understanding everything it stood for, in a million years I would not have imagined this day being possible.  I hope it stands as worldwide example of an evolution toward progress and how faith can and should embrace all.  If more faith based organizations are able to accomplish this, we will see a dramatic decline in homophobia around the world.” (Melanie Nathan) [email protected]

Please note that the discussion begins with a criticism that not enough women are in leadership positions in the Church and the Church moderator makes that admission.

UPDATED Oct 09, We asked Rev. Ecclessia de Lange for a comment on this transformation. De Lange is the former South African Methodist Minister who was fired after informing her Church congregation that she intended to marry her same-sex partner. Her case is currently before the South African Constitutional Court, pending a decision:

“Indeed!I t is an extraordinary decision and we celebrate with all of those who have worked relentlessly for this breakthrough. It is at a time like this that we also remember the pain the church has caused, for those who have lost their lives, left the church, families that have been torn apart and relationships that have been broken. I pray that this decision will set the course for other denominations to follow and for healing and reconciliation to take place.“