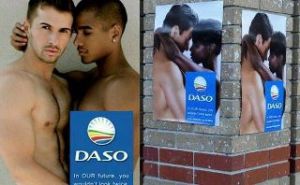 A campaign by the student wing of South Africa’s official opposition party is just perfect for a country that has an all inclusive Constitution; and so why the big deal?  Well the Ad has caused a storm and depicts a black woman embraced by a white man. Judging by the social network comments, it would seem, sadly, that SA may not be ready to embrace true post racism post apartheid as it forges into reality; and yet worse  it may still be stuck in mud of Calvinistic persuasion that pervaded apartheid’s reign! But what about the recognition of same-sex relationships? Is that going to far?

The Poster Ad campaign sensation would revert to one of high tolerance indeed; with one generation believing it is just another poster and the older generation’s collective heads doing a 360 degree swirl. The key to comments abounding social media would still be what is the issue; the nudity, the interracial or the same-sex component?  My sense is the South Africans may well still be hang up on the nudity first! Or am I dreaming?

The campaign by the Democratic Alliance Student Organisation (DASO) features a topless white man and black woman embracing.  The poster, which is an advert of the organization’s 2012 membership campaign, also comes with the tagline:

“In OUR future, you wouldn’t look twice”.

And back a mere decade ago the visual of black and white in sexual nuance would have sent hats flying as if in a 100 mile per hour hurricane and look at the hallabaloo on social media and you wills see that it still does!

Now the double-take could feasibly at the sight of not the interracial, but the two young men and their pose for the future of South Africa. Is that wishful thinking?

This could be the future of Africa and perhaps an opposition party whose youth shows it will indeed embrace the intent of its post-apartheid nickname, ‘The Rainbow Nation.’

This could be a form of educational conditioning and why the heck not – after all it is real and it is true! Some of us happen to prefer same-sex relationships.

And while it may seem repugnant to some in the region, what it could serve to do is make the sight of two men and interracial as not such a big deal after a while.

We call that conditioning! And that is precisely what Africa needs.  The more one looks, the more one sees, and the more okay it shall be!

With increasing dissatisfaction toward the party of Madibe, President Nelson Mandela, the ANC’s current failed leadership in the form of Jacob Zuma, which has been disastrous on almost every level – in the delivery of basic services to all South Africans (water, electricity, housing, food), the fight against rampant crime, and in the need to protect LGBTI people against hateful sexuality violence, This DASO campaign might be just what the doctor ordered or it could send the opposition party running for cover! 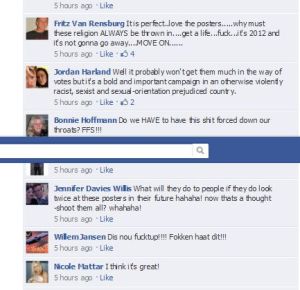 The conditioning that the poster affords South Africa is the start of what should be, an embracing of a Constitution that is all inclusive, unique in the World; it specifically includes sexual orientation and gender identity. At least there is one party willing to abide! And bravely so, especially given the underbelly of the argument which always seem to go back to so called cultural tradition.

So here is to the new world order – the youth and just maybe South Africans will take the lead on a continent that is in dire need of the basic human right, to decriminalize a sexual orientation that is indeed a natural order, scientifically proven, just another spectrum!