This Sunday morning as San Francisco’s Castro awakens to its persistent rainbow flags, the heartbeat of gay America will show solidarity for Russia’s persecuted LGBT community. Who could have imagined that the Russian Orthodox Church would nestle itself in the land of gay glam. Yes believe it – it is true – the Russian Orthodox Church, complicit in the persecution of Russia’s gays,  has found its nest in the CASTRO and that is where we will be, bullhorns, flags and banners, chanting our disgust at Russia’s anti-homosexual propaganda law.

Protesters will peacefully challenge the Russian Orthodox Church over its support for Russia’s anti-homosexual propaganda law that has led to rising violence and anti-LGBT bigotry in that country. 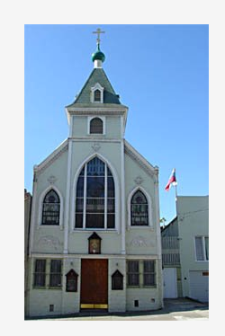 Who: BoycottRussianVodka.com and Gays Without Borders
What: Picket line and speak out
Where: St Nicholas Cathedral
Location: 2005 – 15th Street, between Church and Market Streets
Date: Sunday, August 25, 2013
When: 11:00 AM

Russian Orthodox Patriarch Kirill I, who lives in Moscow, is a leading proponent of the law. Patriarch Kirill is a longtime supporter of Russian President Vladimir Putin and the two leaders both strongly back the recently enacted anti-gay propaganda law that bans any pro-gay statement or demonstrations in public or private and on the Internet. The law, which was enacted in June, has drawn international condemnation.

“Those who are true to their conscience in fighting these minority-imposed laws are subject to repression. It’s a very dangerous sign of the apocalypse.”

The St. Nicholas Cathedral in the gay Castro district is under the control and direction of Patriarch Kirill, who in December 2010 appointed Father Leonid Kazakov of the St. Petersburg diocese to lead the San Francisco church. Emails and voice mails to the church were not returned.

This action is designed to show the love and beauty of LGBT people through the display of the rainbow flag, our international symbol of acceptance and respect for our community. And here is a big advance THANK YOU to all the neighbors of the Church, gay and straight,  who have agreed to fly their flags in solidarity with our cause.

On Sunday, August 25, starting at 11:00 am, which is after the worship service at St. Nicholas’ church, members of the LGBT community will speak outside the church on the public sidewalk for acceptance and respect for the Russian LGBT community and call for the repeal of the anti-gay law.

Rainbow flags will be displayed on the sidewalk and through windows of the neighbors.

Thank you to community organizers for their hard work in putting this together. Now we are asking you to show up and participate.

Please note we may have a very special visitor – negotiations underway!

← The good news is Nikolai Alekseev not willing to talk to U.S. Press
Crucial leadership emerges on boycotts against anti-gay Russian laws →