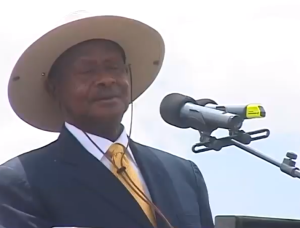 The man who placed his signature to a law that will put gays and LGBTI Ugandans in jail for life, displays his ignorance by equating same-sex love with sex acts such as oral sex. And the people lapped it up! Pun intended.

Museveni Signed the Anti-Homosexuality Act on Feb 24, 2014 and it was gazetted in Uganda to become operational law on March 10.

This rally is the celebration put on by Ugandan Church pastors to than Museveni for his leadership on “Jail the Gays”, once touted as “Kill the gays.”

Watch this Video and to read more go to our first article on the Massive Anti-Gay rally and march led by Ugandan Church leaders and attended by the man who now joins the lowlife ranks of Mr. Poo Poo Ssempa himself.  No respect due here!

First Article on the Rally -https://oblogdeeoblogda.me/2014/03/30/anti-gay-christian-ugandans-rally-in-shocking-war-on-gays/