This week has been a coup for Uganda’s LGBTI community.  Yet again, despite the anti-gay atmosphere in that country, the LGBT leadership and community pulled together for a successful week of Ugandan Pride.

Unlike Pride events in Western countries, which are widely advertised to attract large crowds of straight allies and supporters, Uganda’s Pride is planned and executed with a rare mix of secretive and limited promotion, within the LGBT community only.

Ugandan Pride 2015, could not advertise in a public manner and locations were held close to the vest, with special buses and meeting venues arranged, so participants could be transported to the parade and festival location.

This year the celebrations commenced with an invitation only cocktail party, a Mr. and Ms. Pride contest and ended with a free parade, attended by approximately 100 community members and then a closing party for all.

The events included a series of workshops such as the trans visibility and awareness event, which included a documentary presentation and a panel, talking about  the challenges of transgender people in Uganda. The panel consisted of a group of two transwomen, two transmen, a gay man and a lesbian, all sharing their experiences and the many issues facing trans people. The evening concluded with a performance party, food and refreshment.

The first significant Ugandan Pride was held four years ago, and has continued to function through a series of historic anti-homosexuality events in the country.

Back then, given the extent of the persecution,  I was deeply touched by the magnitude of what was happening and on August 08, 2012, I wrote an article published by the Advocate, probably one of the first to bring a Uganda Pride event to the global public.  With great thanks to U.S. based photographer, David Robinson, we had extraordinary photographic images capturing that moving day, and so we were able to tell a story of the brave and courageous community, entitled: “Ugandans Both Proud and Brave.”

At that time, the situation for gays in Uganda was so precarious that I first checked in to obtain the approval of local activists, as I was concerned about revealing faces of attendees. We obtained permission, a testament to the enormous amount of courage, and I was able to tell the story through those iconic images by David Robinson.  After the article went viral, we received many requests worldwide for the further use of the photos.   For some reason the Article no longer appears on the Advocate webpage, despite the enormous publicity it garnered at the time, however I kept screenshots seen below.  (once housed here – http://www.advocate.com/arts-entertainment/commentary/2012/08/08/see-photos-ugandans-both-proud-and-brave). 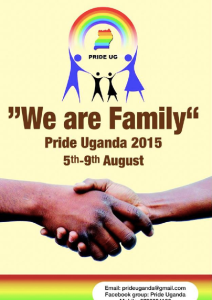 The Ugandan Pride has since come a long way – despite the odds- with great overseas interest, and participants from around the world in attendance. And now a local LGBTI publication, Kuchu Times, launched which enables local reporting. It is with great courage that organizers refuse to succumb to the negative milieu, where people face assaults, mob justice, eviction, arrest and even death.

Uganda Pride has survived the metamorphosis of the Anti-Homosexuality Act (AHA), then known as the “Kill The Gays Bill.”  For years, from 2009 and following, AHA was tossed around as a political tool by the Ugandan President, MPs and politicians.   Several Prides later we have witnessed its passage, its invalidation by the Courts, and now the unfortunate, yet popular petition and Parliamentary committee seeking its return.

Pride this year, in Uganda, under the theme “We are family,” does not come without its controversy within the Kuchu (LGBTI) community itself.

This spat in the Ugandan LGBT community, which flared up on social media, is indicative of the trajectory for all Pride movements around the world, where similar complaints and problems have been triggered by suggestions of corporatism and elitism.  This conflict seems ‘par for the course’ for any growing movement.  What counts is the ability to survive the conflict, learn from it and to grow.  Sweeping it under the rug serves no one. As long as Pride continues and grows, it will continue to experience more such complaints in the future. However in the case of Ugandan pride, the challenges are much more than in Western realms, where being LGBT is not criminalized.

We cannot lose sight of the fact that the LGBTI leadership has done an extraordinary job with Pride and of creating awareness, providing education to community and being plaintiffs to work with allied human rights organizations, to assist in the battles tackling the anti-gay religious right, the homophobic politicians and the anti-gay legislation.

When all is said and done – I think it is important to note that Uganda Pride continues to be both for the PROUD and BRAVE  – an imperative movement and example to the rest of Africa and the world. I have no doubt, observing the resilience and profound leadership of those on the ground,  that it will grow from strength to strength. Let us hope it averts the mistake of elitism and does not buy into the rhetoric of its enemies.

Many pictures are appearing on social media. However I have decided not to show any faces. If you are wanting to see more about Pride please visit KUCHU TIMES website, where hopefully the risks have been weighed.

And while we laud Pride, one cannot forget those who have been compelled to seek exile, unable to celebrate Pride at this time. To those who are suffering the pain of exclusion, anywhere in the world, we say “hold on” your time will come!

READ MORE FOR THE NON PUBLIC DETAILED VERSION OF THIS ARTICLE ACTIVIST EDITION .

Here is some history going back to Pride’s of Past: 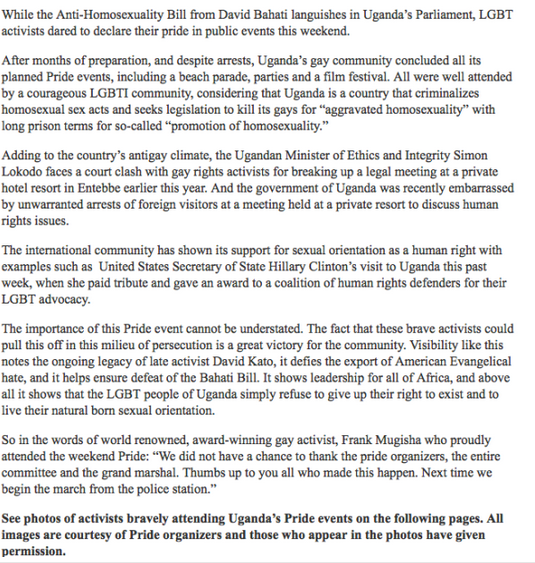 4 thoughts on “Uganda Pride 2015 The Proud and Brave Revisited”