Today the U.S. Government put its ban on Muslim refugees into action by detaining two Iraqis as they landed in the United States. Included is a contractor serving in a trusted position for the U.S. military in Iraq.

According to the ACLU, lawyers for the two Iraqis who had been granted visas to enter the United States have filed a lawsuit against Trump and the US government after they were detained when they arrived in New York Friday.

The lawsuit could represent the first legal challenge to Trump’s controversial executive order, which indefinitely suspends admissions for Syrian refugees and limits the flow of other refugees into the United States by instituting what the President has called “extreme vetting” of immigrants.

Trump’s order also bars Iraqi citizens, as well as people from six other Muslim-majority nations, from entering the US for 90 days, and suspends the US Refugee Admissions Program for 120 days until it is reinstated “only for nationals of countries for whom” members of Trump’s Cabinet deem can be properly vetted.

The U.S. Government under the Donald Trump administration is discriminating based on religion and other discriminatory factors.  It is despicable:

According to the New York Times:

“But the order is illegal. More than 50 years ago, Congress outlawed such discrimination against immigrants based on national origin.”

That decision came after a long and shameful history in this country of barring immigrants based on where they came from. Starting in the late 19th century, laws excluded all Chinese, almost all Japanese, then all Asians in the so-called Asiatic Barred Zone. Finally, in 1924, Congress created a comprehensive “national-origins system,” skewing immigration quotas to benefit Western Europeans and to exclude most Eastern Europeans, almost all Asians, and Africans.

The Immigration and Nationality Act of 1965 banned all discrimination against immigrants on the basis of national origin, replacing the old prejudicial system and giving each country an equal shot at the quotas.

In signing the new law, President Lyndon B. Johnson said that “the harsh injustice” of the national-origins quota system had been “abolished.”

What Trump has failed to do is his homework and to get a basic understanding of how this all works. Not only is the United States under the administration of white supremacists seeking to keep America white, but also in the hands of a bunch of fools who are unqualified to lead.  With such flagrant  unconstitutional actions, one is left with very little to wonder about the competency of this new administration. What we knew before the inauguration now manifests into reality and the abject inhumanity is palpable.

I would add my disappointment in the Democratic Senators who are voting yes for any single Trump cabinet appointee – who they know to be unqualified to lead in cabinet positions.  In my opinion playing politics is in effect normalizing this Trump administration and at this juncture we believe our Democratic representatives are complicit when they vote yes! Given what is going on in actual fact – requires absolute resistance and obstruction in every realm.

UPDATED:  One man released – thanks Jerry Nadler for going down to JFK and the ACLU for swift action. 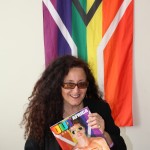 PLEASE HELP THE ADVOCACY AND SUPPORT FOR WAITING AND DELAYED LGBT REFUGEES WITH A DONATION TO AFRICAN HRC at http://www.africanhrc.org/donate