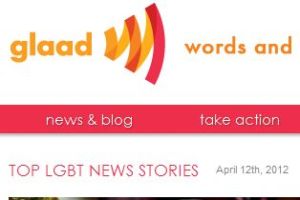 In March, GLAAD announced that Facebook would be receiving a Special Recognition Award for the company’s strong stand and leadership around bullying prevention as well as its inclusive options for LGBT users.  After violent anti-gay images and comments were posted on a memorial page for LGBT youth, Facebook worked with GLAAD to monitor the highly visible page and launched, in conjunction with several LGBT organizations, the Network of Support.

Facebook’s Andrew Noyes and Sara Sperling, who will accept the award on behalf of Facebook, were instrumental in the creation of the Network of Support, which serves in a consultative capacity to help the company effectively address issues faced by the LGBT community.  Through the Network of Support, Facebook partners with GLAAD; MTV; the Human Rights Campaign (HRC); the Trevor Project; the Gay, Lesbian, Straight Education Network (GLSEN); and Parents, Families & Friends of Lesbians and Gays (PFLAG).

High school student Brittany McMillan will present the award. McMillan launched the idea for Spirit Day in 2010 and began working with GLAAD on the annual event which inspires millions of participants to wear purple or change their Facebook photo to purple in support of LGBT youth and to stand up against bullying. Facebook was among the companies that participated last year.

Facebook’s leadership on anti-bullying initiatives was also recognized with an invitation to participate in the White House Conference on Bullying Prevention.  There, the company announced it was seeking feedback from teenagers on bullying prevention, aired a special “Facebook Live” broadcast, and unveiled new tools that allow abuse reports to be handled more efficiently.

“Facebook has set the bar high for ensuring LGBT people have a safe space to connect with friends and family,” said GLAAD President Herndon Graddick. “GLAAD is pleased to present this award to Facebook in recognition of its efforts to make their platform welcoming to everyone.”

GLAAD previously announced that Glee’s Dianna Agron will host the event in San Francisco on June 2 at the Marriott Marquis, and that Shonda Rhimes (Grey’s Anatomy, Private Practice, Scandal) will receive the Golden Gate Award, and Wells Fargo will receive the Corporate Leader Award at the ceremony.

Nominees for the 23rd Annual GLAAD Media Awards were announced in January and are available here: http://glaad.org/mediaawards/nominees.  The GLAAD Media Awards recognize and honor media for their fair, accurate and inclusive representations of the LGBT and the issues that affect their lives.

The New York GLAAD Media Awards event was held on March 24 at the Marriott Marquis Times Square, and the Los Angeles event was held April 21 at the Westin Bonaventure Hotel & Suites.

A complete list of award recipients announced at the New York and Los Angeles events may be found at http://glaad.org/mediaawards.

The GLAAD Media Awards fund GLAAD’s work to bring stories of LGBT people and issues to Americans.  Each year, the GLAAD Media Awards in New York, Los Angeles and San Francisco bring together more than 5,000 advocates and allies to raise nearly $3.5 million for the organization’s work.

More than 100 corporate partners are showing their support.